River Ave. Blues » New Yankee Stadium won’t have the best seats in the house
Down on the Farm
Reviewing the Sickels Mock Draft 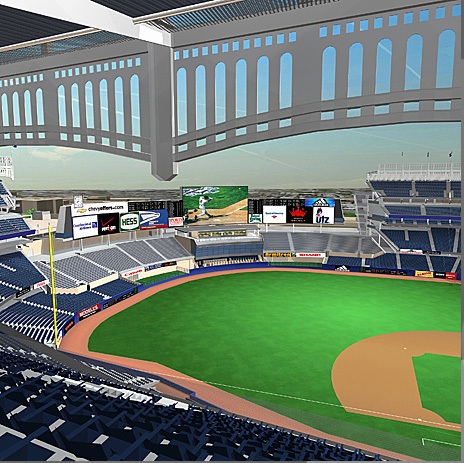 I’m no fan of the New Yankee Stadium. While I understand the economics behind the Yanks’ desire for a new stadium, I don’t see the problem with Yankee Stadium.

I know I’m not alone, but Yankee fans have been underwhelmingly quiet about the new stadium. There were no protests to speak of, and the most vocal advocacy groups fighting the stadium were those rightly concerned with the loss of valuable park land in the South Bronx. The Yankees wanted their new stadium, and they will get one that will look just the one in Philadelphia which looks just like the one in San Diego which looks just like the one in Milwaukee and so on.

So the team will get its new playground, but we fans will get a giant surprise: The best seats in the house won’t be there anymore.

The tier level seats in Yankee Stadium are one of the great joys of the current stadium, remodeled in the 1970s. The boxes hang low over the lower decks and offer an intimate view of the field and the game. With the Tier Boxes so low, even the Tier Reserve seats don’t see as high up as they do in Shea Stadium or Citizens Bank Park in Philadelphia.

All of that will change in the new stadium, and no one had reported this dismaying fact until Neil DeMause presented it in an article everyone overlooked in the Village Voice in March. DeMause wrote:

B: The upper deck of the new Yankee Stadium will be about the same height as the old, though with the last few rows trimmed off. (The old park holds 57,545; the new one will seat 53,000, plus 1,000 standing-room.) The new top tier, however, will be set back an extra 30 feet from the field, to keep the high-priced patrons below out of shadow. This less compact design also risks snipping a few decibels off the stadium’s signature crowd roar.

This should stir up passive Yankee fans. Thirty feet! That’s a lot. When I was at a game a few weeks ago, I eyeballed thirty feet. I figured that the Tier Boxes at Yankee Stadium will start where the first row E is in the current stadium. Just so some rich non-fans can pay for the quote-unquote Yankee Stadium Experience, the rest of us fans who have stuck with the team for decades will have to say goodbye to that wonderful intimate view of the game from the Tier level.

K: With the luxury-box market tanking, the teams will build a relatively modest 50 to 60 suites, instead opting for more premium-priced “club seats,” which offer roomier seating. Their extra legroom comes at a cost, though, forcing the cheap seats behind them to be pushed skyward.

It’s just more of the same. The people with money get the views while the fans who like to go games day in and day out get screwed. Welcome to the New Yankee Stadium, fans. There’s nothing we can do about it anymore.

Down on the Farm
Reviewing the Sickels Mock Draft