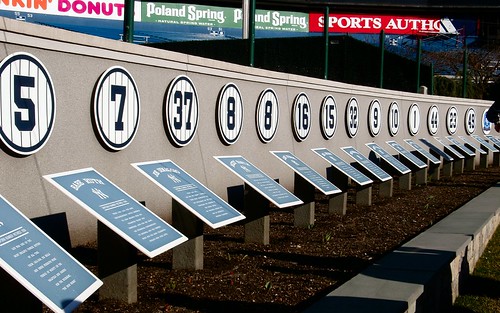 That sure is a long line of retired numbers. (Photo by flickr user aeonix01)

The Yankee fan masses have spoken. After three days of voting, 79 percent of you feel that Paul O’Neill’s number should not be retired while 21 percent of you would like to see 21 added to the growing list of Yankee retired numbers.

Despite these overwhelmingly one-sided results, the debate has generated a lot of conversation about the nature of retired numbers and the way the Yanks go about retiring the numbers. Some fans seem to feel that the Yanks retire way too much numbers; others feel that the honors are warranted. And no one can agree on exactly what standards are applied to a player to determine if a number is retired.

Take Phil Rizzuto’s number 10. Rizzuto is, famously, in the Hall of Fame after many passionate fans waged a rather rabid campaign to get him inducted, and one could say that he’s in the Hall as much for his decades-long career behind the microphone as he is for his play on the field. In fact, his play on the field, while great at its peak, wasn’t that spectacular overall. He played 13 years for the Yanks and hit .273/.351/.355.

In 1985, the Yanks decided to hang up Rizzuto’s 10. At that point, he had been retired for 31 years, and seven other players — including Chris Chambliss, Tony Kubek and Rick Cerone — had worn 10. Why the Yankees opted then to retire Rizzuto’s number is anyone’s guess. In fact, as an August 18, 1985 letter to The Times shows, Yankee fans 23 years ago were not of the mind that Rizzuto was deserving of a spot alongside the Yankee greats.

Ron Guidry’s 49 and Reggie Jackson’s 44 are also big question marks. Guidry was great for a long stretch but not a baseball immortal. Reggie had a few iconic games in the post-season for a team that played during an era when George Steinbrenner was hell-bent on winning the World Series. He ended up spending just five of his 21 seasons in the Bronx.

Interestingly, the timing of these two retirement ceremonies raises an eyebrow or two as well. Reggie’s number was retired in 1993 when he was inducted into the Hall of Fame. At the time, the Yanks were mired in their worst World Series drought since the early years of the Twentieth Century, and perhaps, George was looking to recapture some of the aura of his glory years of the 1970s. Guidry’s number was retired in 2003 right when he was returning to the Bronx fold. The Times speculated that perhaps it was some sort of gesture of appreciation designed to draw Guidry into a soon-to-be vacant coaching job.

Whatever the case, retired numbers are a prickly issue in Yankee-land. Fans of players from recent teams grow vehement in their arguments for or against enshrinement in the outfield. Take the 1990s teams. Off the top of my head, I would guess that Derek Jeter, Mariano Rivera, Joe Torre and Bernie Williams will see their numbers retired. Paul O’Neill supporters will feel slighted, and Jorge Posada fans will wonder why their catcher doesn’t get the same respect. Andy Pettitte’s 46 never comes up and was in fact given out to five players during’s Pettitte’s three years in Houston. And the A-Rod debate will rage forever until or unless the Yanks win a few rings while he’s in town.

Meanwhile, as the Yanks slowly run out of respectable numbers, a few fans have floated the idea of un-retiring certain numbers while keeping the number circles up as monuments in Monument Park. While I like the idea in principle, how that would work is again anyone’s guess.

The Yankees have a tricky balancing act to perform. They have a vast history that they want to enshrine and recall. They have legends of the game and legends of the Bronx and just plain old fan favorites. As the available numbers decrease and more plaques find their way to the left field park, these debates will only grow more boisterous. Who needs single-digit numbers anyway?

Rasner makes his case
Horne should begin throwing this week