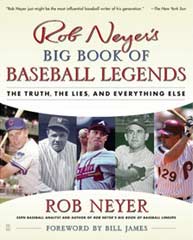 Of course, this type of text isn’t for everyone. Some people want to go on believing these stories of heroes in eternal bliss. No problem there. But for some of us, the truth adds another dynamic to the stories. If you’re of this ilk, then read on, because “Legends” is quite the fun read.

There are plenty of Yanks stories in the book, which is to be expected. With so many legends having passed through the halls of Yankee Stadium, I’m sure Neyer could compile an entire book just for the Yankees.

Leading off for the Yanks is a story relayed in the YES booth (apparently during a My9 broadcast) by Ken Singleton. On the occasion of Louisiana Lightning’s 57th birthday, Kenny told a story of how Ron Guidry never used his changeup until he was nine years deep in the majors. Willie Wilson was the victim of the first offering, and Singleton said it was a strikeout to end the game. In said game, according to Singleton, Guidry struck out Wilson three times.

Unfortunately, there’s only one Steinbrenner story. The good news: It involves him firing someone. This comes from 1973, Big Stein’s inaugural year in the Bronx. Ralph Houk was managing, and he claims to have sent up Johnny Callison — who was OPSing .337 at the time — to pinch hit with runners on in a close game in Texas. Callison, according to Houk, “struck out or popped up,” ending the Yanks potential rally. After the game, Stein called Houk and told him to release Callison. Houk didn’t want to, but after GM Lee MacPhail talked to the Boss, he called Houk back to tell him to release Callison.

It appears Houk conflated the situation. In a game against the Angels in New York, Callison pinch hit for Felipe Alou and grounded out with runners on, keeping the score at 3-1 Angels, which is how it ended. He played a half inning in right field two nights later in Texas, but did not appear at the plate. That was his last major league game.

(In the end, Stein was clearly in the right in calling for Callison’s release.)

For the younger crowd, there’s an interesting story about Jeff Bagwell and Greg Maddux. I’ll quote George Will of Newsweek for the myth:

Leading 8-0 in a regular-season game against the Astros, Maddux threw what he said he would never throw to Jeff Bagwell–a fastball in. Bagwell did what Maddux wanted him to do: he homered. So two weeks later, when Maddux was facing Bagwell in a close game, Bagwell was looking for a fastball in, and Maddux fanned him on a change-up away.

Is Greg Maddux really that sly? He really had the wherewithal to groove one to Bagwell in a meaningless situation so that he could nail him in a meaningful one? Well, if anyone would do it, it’s Maddux. Still, something doesn’t seem right here.

Through Neyer’s inspection, we find that Bagwell hit seven career regular-season homers off Maddux. However, none of them came with an 8-0 or 7-0 score. Only two came when the Braves were leading by more than two runs. September ’96 was the first, but Maddux made zero starts against the Astros after that. The other was August 11 of ’99, which was also Maddux’s last start against the ‘Stros.

Ah, but the Astros did make the postseason that year, and they did face the Braves and Maddux. The two faced off in the series opener, and Bagwell did strike out. Further, it was a close game. However, it was the first inning, and no runners were on. So it appears that this is a rather overblown story.

(Mr. Will could have fact-checked this one himself. It was written in 2006, and Baseball Reference and Retrosheet were freely available.)

To quote Neyer on the conclusion:

I don’t doubt that Greg Maddux, in some fashion or another, set up Jeff Bagwell at some point during their long careers. Or rather, I don’t doubt that Maddux believes he did that. And maybe he did. Pitchers have been telling stories like this one for nearly as long as there have been pitchers. But believing you did something and actually doing it are sometimes different things.

As with all of Neyers’ work, this books is thoughtful and well-written. He’s conversational in his prose, which lends itself well to a book like this. Instead of plainly debunking baseball legends, Neyer acts as if he’s in your living room, sipping a cold Saranac and looking up the facts on his laptop. Which is nice, because that’s how the stories are told and spread in the first place.

Once again, some people might view this as a “That didn’t happen like that!!!111!!!!” kind of book. And if you don’t want to give up baseball lore, stay away from this tome. However, it’s hard to downplay the enthusiasm Neyer displays in his execution. You can tell he not only enjoys debunking old legends, but that he enjoys the legends themselves.

The book also represents a kind of melancholy about present-day baseball. There won’t be as much room for these kinds of anecdotes, since we have play-by-play data and a whole gamut of statistics a mouse-click away. It’s far more difficult to get away with telling a tall tale when someone can click back to last year’s game logs to prove it false.

There are plenty of other Yankees stories in the book, including the story of Thurman Munson and his feud with Carlton Fisk. Then there’s an always-intersting Reggie/Billy Martin story, plus one about Billy and Jackie Robinson. And no book of baseball legends would be complete without a little Babe Ruth and Lou Gehrig.

I’d recommend parking this book in front of the toilet. The stories are short enough for even those of us who like to get in and out of the bathroom quickly. If you plan to pick up a copy, click here for Neyer’s Amazon affiliate. That gives him a commission on the sale, which is nice, since Amazon is notoriously skimpy on the royalties it pays to authors.

Checking in on an old friend
Game Eight: Scheduling difficulties