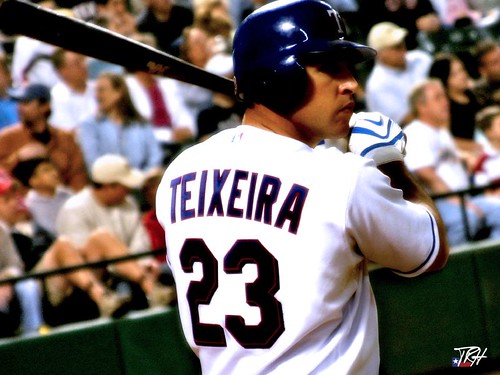 Our long national nightmare is over, as Mark Teixeira will officially be introduced as a Yankee today after those bothersome holidays got in the way. The presser is going to be carried by ESPN, MLB Network and presumedly YES.  There’s still no word on the corresponding move to open up a 40-man roster spot, but my money’s on Shelley Duncan getting the old heave-ho. We’ll probably find out after the press conference is over.

Now that the deal’s official, I’ve update the Depth Chart and 2009 Draft Order pages. The Brewers and Blue Jays had been in line to receive the Yanks’ first and second rounders, respectively, but because Tex was the highest rated Type-A free agent, the Angels will now get the Yanks’ first rounder. The Crew and Jays will now have to settle for a second and third rounder, again respectively. Despite losing their own first rounder for signing Brian Fuentes, the Angels still have two true first rounders and two sandwich rounders because they lost Tex and K-Rod. They also stand to gain another sandwich rounder if Jon Garland signs elsewhere.

Ben (not me) is going to liveblog this thing for all of you stuck at work. Enjoy.