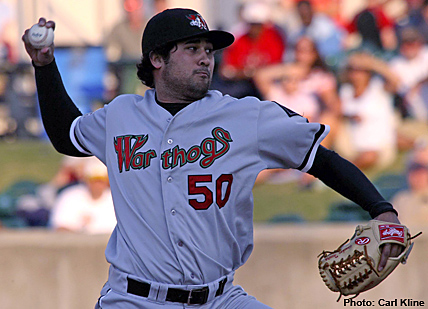 Background
Born in Maui and raised in Honolulu, Texeira attended Kamehameha High School, which has produced two fringe big leaguers: ex-Yank Bronson Sardinha and his brother Dane. His high school career was plagued by inconsistency – after flashing premium arm strength as a junior his stock took a hit when he was merely ordinary as a senior. Baseball America rated Texeira the second best talent in the state for the 2004 Draft, but he lasted until the 34th round of the draft (916th overall), when the Brewers grabbed him. He didn’t sign and instead headed to Saddleback College in Orange County, CA, a two-year institution.

Texeira served as a swingman as a freshman, going 2-1 with a 1.69 ERA, 1.57 WHIP and a 4.72 Kper9 over thirteen appearances (four starts). He struggled mightily with his command, posting a 14-22 K/BB ratio in his 26.2 IP. Saddleback went 8-13 in conference play and 20-14 overall, and did not qualify for the California Community College postseason. Although he was eligible for the 2005 draft, Texeira went undrafted and returned to Saddleback for his sophomore season.

Working almost exclusively out of the rotation, Texeira was the Gauchos’ number two starter as a sophomore. He went 6-1 with a 4.00 ERA, 1.43 WHIP and a 5.57 Kper9. He was second on the team in wins, starts (11), innings (63), and strikeouts (39), and more importantly he cut his walk rate from 7.42 BBper9 to 3.43. Saddleback went 1-2 in the Orange Empire Conference Tournament and again failed to qualify for the postseason. Because he was an underwhelming prospect and was relatively unrecruited by a four-year universities, Texeira turned pro when the White Sox selected him in the 22nd round of the 2006 draft, 675th overall.

Pro Career
The White Sox assigned Texeira to Bristol of the Rookie level Appalachian League after he signed, where he dominated out of the bullpen. He worked 23.2 IP over 19 appearances, allowing just 15 hits and 5 walks against 29 strikeouts, and posted a microscopic 0.76 ERA thanks to a stretch of eleven consecutive scoreless outings. Bumped up to Low-A Kannapolis to finish up the year, Texeira allowed eight hits and three runs in six mop-up innings.

Texeira showed up to Spring Training overweight in 2007 and was placed in a conditioning program affectionately known as Fat Camp in the ChiSox organization. He was sent back to Low-A Kannapolis after camp and served as the Intimidators’ closer all year, racking up 16 saves for a team that finished 19.5 games out of first. He allowed 49 hits and 22 walks in 53.2 IP (39 appearances), striking out 58 (9.73 Kper9). Texeira joined the Honolulu Sharks of Hawaii Winter Baseball after the season as an injury replacement, pitching an additional 22 innings (3.71 ERA).

Texeira was traded to the Yankees along with 1B/OF Nick Swisher on November 13, 2008 in exchange for RHP Jeff Marquez, RHP Jhonny Nunez and IF Wilson Betemit.

Scouting Report
Texeira is a classic sinker-slider reliever. His best offering is a slider that dives away from righties with hard two-plane break, which explains why they hit just .186 with a 2.38 GB/FB rate off him in 2008. His fastball generally sits in the 89-91 mph range, although he can hump it up to 93 if he puts everything into it. Texeira is most effective in the upper 80’s, when he gets the most movement out of his heater. The White Sox had him work on a changeup earlier in his career, but it’s nothing more than a show-me pitch. He does an excellent job of keeping the ball in the park, allowing just three homers total in the last three years.

Working from a low three-quarters arm slot, Texeira isn’t too far off from being a sidearmer. That arm slot is what makes his slider so good, and so far he’s been durable as a pro. His control needs work, and although he had no issues in 2008 he has to work diligently to keep his weight in check. As a dominant reliever he hasn’t gotten much of an opportunity to work on holding runners.

2009 Outlook
Texeira will start the year as a key cog in Double-A Trenton’s bullpen, and could be in line for a midseason promotion to Triple-A Scranton. Rule 5 Draft eligible after the season, Texeira could be trade bait at the deadline given the Yanks’ crowded 40-man roster.

My Take
The Yankees have more relievers in the uppers levels of their farm system than they know what to do with, and Texeira just adds to that crop. I’m a huge JB Cox fan and that’s who Texeira reminds me of, albeit with less control and without the impressive track record at an elite college program. In reality, he’s just another young and cheap relief option with good stuff that’s near Major League ready. With all do respect, I’m glad he’s only the second best Tex the Yanks picked up this offseason.