River Ave. Blues » Heller’s book offers ‘Confessions’ of any fan
A look at Phil Hughes' start with Pitch f/x
Kennedy has a vasospasm 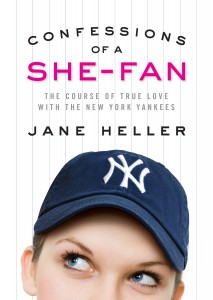 Nearly two years ago, Jane Heller penned a column in The Times expressing her utter frustration with the New York Yankees. Her favorite team since she was a teenager, the Yanks had frustrated her with their mediocre play, and finding little joy in the corporate and middling Bombers, she threatened to divorce the team.

That column set off a firestorm of sorts. Yankee fans — and baseball fans — from around the country attacked Heller’s fandom. How could someone proclaiming to be a fan, to love a team ’til death do us part, divorce them for bad play? That’s the very definition of a fair-weather fan.

In response to the column, Heller did what any rational fan would do — she wrote a book about her love of the Yankees. That book, published this spring and entitled Confessions of a She-Fan, isn’t your typical baseball memoir. While it talks about the origins of Heller’s love of the team, it’s more about the process of an outsider writing a book about the team she loves while facing a lot of pushback. It’s also about a female writing from a distinctly female perspective and hoping to connect on a level that might not exist.

The main gist of Heller’s book focuses around her efforts in 2007 to follow the team. She gets a book deal to write about the Yankees and then spends the summer trying to get access. She follows the team around the country for the better part of four months, missing only a handful of games. Along the way, she rides the ups and downs of the season while trying to get inside the clubhouse to interview the players.

Needless to say, she doesn’t quite succeed until the end when she runs into one Yankee — I won’t say who — in a restaurant. That Yankee, a short-lived member of the Bronx Bombers, gives her a ring after the season to talk about playing on the Yankees. It’s a great coda to a tale of frustration.

That frustration stems from a Yankee organization intent on limiting access. She tries to go through Jason Zillo, the Yanks’ media gatekeeper, but Zillo, who fields more than his fair share of calls like Heller’s, wants credentialed writers only around the Yanks. She tries every which way to make an end-run around Zillo. She tries to go after Jean Afterman and Suzyn Waldman, connecting to them on that female level. Waldman is responsive; Afterman is not. She befriends John Sterling and runs through her Rolodex searching for ways in to no success. It is, then, no surprise that the Yanks didn’t want Heller’s publishers to advertise her book in the Yankee Magazine this year.

The tale of access though is nearly beside the point, and the focus on Heller’s gender nearly detracts from the fan experience. Throughout the book, Heller relates her emotional ride as the Yanks stumble out of the block, recover over the summer, make the playoffs and then lose when a bunch of bugs attack Joba Chamberlain on a hot October day in Cleveland. She talks as though a She-Fan is a distinct species of fan, but it’s not. In the end, Heller is just like the rest of us who live and die with the Yankees.

The culture of exclusivity around the Yankees made me chuckle as I paged through Heller’s story. The beatwriters are more or less obliging after initial skepticism; the Front Office is less than forthcoming; and Sterling and Waldman, the voices of the team, come across as the most obliging. Heller weaves a fun tale of fandom, and it makes for some baseball reading to which the most dedicated and obsessed can easily relate.

Jane Heller’s Confessions of a She-Fan is available here at Amazon. That link contains the RAB affiliate code. So if you’re thinking of buying the book, that link will toss us a few pennies. Jane continues to write about the Yankees on a daily basis at her blog of the same name.