River Ave. Blues » Review: Mohegan Sun Sports Bar Seats at Yankee Stadium
The Final Game as seen through the eyes of a fan
A Pitch f/x look at Bugs Bunny

As the byline implies, this is a guest post. For reasons we deemed reasonable, he wishes to remain anonymous.

I haven’t seen any reviews of the Mohegan Sun Sports Bar at Yankee Stadium so I thought I’d share my thoughts.

I attended Sunday’s game, which the Yankees won thanks to Jorge Posada’s disputed home run. I bought tickets online Friday night and had no problem getting seats.

This bar has received much criticism because it obstructs the bleacher seats on either side. Many have called for its dismantling after the season and even the Mohegan Sun has expressed its displeasure over the situation. 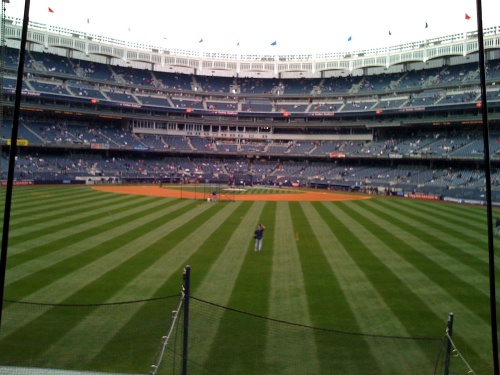 I have a different take, having watched a game there. I think the Yankees deserve praise for creating seats with a unique vantage point. The photos you’ve seen don’t do it justice. The seats offer a tremendous view of the field — dead on. You see the game pretty much as Brett Gardner does and as Mickey Mantle once did. If Mohegan Sun backs out of their deal, the Yankees should rename it the Batter’s Eye Sports Bar.

I hope the Yankees keep these unique seats intact and make some much-needed improvements (see below). I would prefer to see the Yankees remove the $5 obstructed bleacher seats to create a larger area for Monument Park.

Privacy: Unlike the pricey Legends seats across the field, the Mohegan seats offer privacy. Because you’re sitting inside behind one-way glass, you need not worry about being caught on TV if you’re playing hooky from work or other responsibilities.

Unique View: I already mentioned the unique view of the game these seats provide. Ross Sheingold of New Stadium Insider expressed concern about glare. I can report that there’s no glare. I sat there from about 12:15 to 4:30.

Seats: The seats are not fixed. You can move them around. There’s ample space between the seats so it’s not cramped. The artist renderings on the site show fixed seats. The Yankees should replace these with actual photos.

Food: You need not order from the bar’s menu. You can take a short walk to Lobel’s or any other concession and bring the food back to your seat.

Kids: Kids are welcome. That was nice to see.

Beer: The beer selection is excellent for a baseball stadium — Brooklyn Lager, Newcastle, and Hoegaarden to name a few. Plus my favorite lowbrow beer — Yuengling (much better than Bud or Pabst in my opinion).

Service: The servers are friendly and helpful. You can go to the bar on your own, which would not have been a hassle on Sunday, but if the bar becomes jammed (as I suspect it will for Thursday, Friday, and Saturday night games), it’s nice to know that you can order from your seat.

Indoors: Attending a baseball game on a cold April or October night just isn’t as pleasant as attending during warm weather. For those of us who hate cold weather, it’s nice to have an indoor option. If the Yankees make the postseason, I’ll try to get tickets in the Mohegan Sun Sports Bar. Plus, what better place to wait out a rain delay?

Bathroom: Not only is it relatively clean, but there’s a full-time attendant so no one misbehaves and the supplies remain stocked.

Menu: I have a fairly wide palette yet I found nothing appealing on the menu. Instead, I went to the concessions (two Nathan’s hot dogs and garlic fries). I realize the Yankees run their own food services operation, but they should swallow their pride and bring in some people who know how to create great bar food. I would vote for Rite On (PS 450, Vig 27, etc.), but there’s lots of talent out there. The current menu is an embarrassment. See for yourself (ed. note: PDF file).

Booze: I’d like to see frozen margaritas, especially once the hot weather arrives. Most frozen drinks are too girly for your typical baseball fan (i.e., male, 25-55 years old), but everyone likes frozen margs.

Sound: If you think the new stadium is quiet when you’re sitting outside, try sitting inside. You cannot hear anything, including the PA system. Unfortunately, the Yankees pipe in the radio broadcast. I would prefer the YES broadcast as I’m not a Suzyn Waldman fan (is anyone?).

TVs: The folks without seats in the upper bar area have TVs to view, but you cannot see these TVs from the seats. And of course, the Mohegan Sun Sports Bar resides below the scoreboard so you can’t see that either. Thus, you cannot watch instant replays. I suggest hanging a TV from the ceiling perpendicular to the seats so you can see important plays like Jorge’s disputed home run.

WiFi: I could not use the WiFi network. I found it, but it requires a login and offers no way to create an account.

AT&T: AT&T’s service was spotty. It worked, it didn’t work, it worked. When it worked, it was helpful to catch up on game details easily missed from way out in center field.

Price: Tickets cost $90. As a guy who believes in market forces, I can’t really offer an opinion. I had fun and felt I got my money’s worth. Most of the seats seemed empty (but you never know how many sold) so perhaps the Yankees will drop prices. However, these seats could become a big draw because of the unique view, the beer selection, and the waiter service. It would make for a great bachelor party and other events.

Casual Fans: Several people with seats sat down, ate a meal, watched an inning, and then disappeared for long stretches. Some never returned. I think these casual fans now exist in all corners of the new stadium. Unlike other fans, I don’t necessarily see this trend as a bad thing. It’s probably inevitable. Steve Wynn realized that Las Vegas could grow larger only by appealing to non-gamblers. The Yankees probably feel the same way about casual fans. And yes, these folks don’t cheer as loudly. That’s no reason to vilify them.

Don’t knock the Mohegan Sun Sports Bar until you’ve sat through a game there. I bet you’ll have a good time. Let’s hope the Yankees improve these already enjoyable seats.