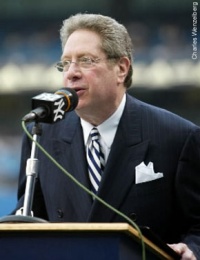 The Yankees are the richest franchise in baseball. They spend upwards of $200 million annually on payroll. They just built a new Stadium, and have furnished it with the finest accommodations. Yet there is one area where the Yankees have skimped: their play-by-play men. This criticism is particular to radio man John Sterling, of whom Post columnist Phil Mushnick has had enough. I’d like to second Mushnick’s motion to remove Sterling from the booth.

This, of course, will never happen. Sterling has been the radio play-by-play man for the past 20 years, and has a contract which reportedly runs through 2011. Still, his shortcomings have become more pronounced over the past few seasons, to the point where there is now a blog named for his poor calls. But because Sterling is so entrenched in the Yankee family, there is no chance of him going anywhere, no matter how many errors he makes in describing the scene.

Mushnick shares a handful of examples from this past weekend alone. The most egregious came during Saturday’s game, when Sterling mistakenly called Hideki Matsui’s double a home run. This coming on a ball that didn’t even hit the wall on a fly. Matsui ripped it, no doubt, and Sterling fired up the home run call, beginning with “It is high,” proceeding to “it is far,” and then finishing with the exclamation, “It is gone!” But it wasn’t. Yankees fans have grown accustomed to this false call, though most of the time Sterling utters the first two, but concludes with “it is caught,” many times before the warning track.

Another example Mushnick describes is one I experienced personally on Friday night. Waiting outside Gate 8 for my friend to show up, I was stuck listening to Sterling’s call. There’s really nothing worse than standing right outside Yankee Stadium and having to hear Sterling describe what’s happening just beyond the wall. Derek Jeter, leading off the bottom of the first, hit a liner to left. Denard Span caught it at his waist, but the way Sterling described it I was sure Jeter had doubled off the wall. A train screeched by at that point, so I wasn’t able to hear his correction. It wouldn’t have been necessary had he gotten the call right the first time.

Sterling is also wont to blame others for his own blunders. If the scoreboard count is incorrect, forget about it. He’s John freaking Sterling, he doesn’t need to keep track of the count. Never mind that he has the YES monitor right in front of him. This leads to another criticism. Last week, I believe against Toronto but it could have been Baltimore, the home plate ump was signaling strikes by putting up a fist in front of his chest. This apparently annoyed Sterling, since he couldn’t see the ump’s call. Far be it from him to look at the monitor to see the call.

Not only does he regularly bungle calls throughout games, but he also apparently 1) has no memory of the recent past, and 2) doesn’t bother to learn the players on the roster. On May 7, in a tie game against the Rays, Jose Veras trotted out for the ninth, which would have been his third inning of work. This was just to buy a bit more time for Mariano Rivera, and pretty much everyone knew that. Sterling probably did, too, but he commented that he couldn’t remember the last time Veras had pitched three innings. This would have been a benign comment had Veras not pitched back-to-back three-inning affairs just two weeks before. He pitched three innings on April 18th against Cleveland, in the blowout game, and then pitched 3.1 in the 14-inning game against Oakland. Regarding knowledge of the roster, my dad called me from the Jersey Turnpike during Spring Training, bemoaning Sterling’s lack of knowledge about Mike Dunn, who had just entered the game. Is it so much to ask a guy whose job is to talk about the Yankees to know the players on their 40-man roster?

We could take all day and chronicle the shortcomings of John Sterling, and some of us might have fun doing so. Yet no matter how much we complain about his errors in the booth, he’ll still be ready to go at 7 p.m., as he is most weeknights — the man hasn’t missed a game yet. However, the entire issue boils down to this: John Sterling’s ego is so massive that it gets in the way of his ability to call the game. Like Tim McCarver, Sterling is in love with the sound of his own voice. That sometimes leads to unintentional humor, like his drawn out “off the mezzzzzzzanine” calls when home runs hit off that part of the park, or like IIH, IIF, IIC’s Warble Index. Most of the time, though, he’s too busy mocking people who think about and analyze baseball to accurately call a game.

Mushnick sums up his stance thusly:

But something’s gotta give — either Sterling gets better (most unlikely), gets his time reduced by a fresh voice (why not?) or gets out.

The answer to Mushnick’s rhetorical is no one, anywhere. This goes especially for the Yankees. The team is rich enough to bring us multiple $100-million players and a ritzy new Stadium, but can’t find the courage to remove a force which has been detracting from their brand for the past five, ten years? That’s what kills me the most: the Yankees talk endlessly about their powerful brand, yet that brand is represented in large part by John Sterling. He is like an ambassador for the team, spreading their message via AM radio waves. And on an almost nightly basis, he embarrasses that brand.

Yankee fans deserve better. They deserve to have games called accurately by someone or someones who understand not only the Yankees, but baseball as a whole. They deserve someone who will do his or her homework and bring fresh ideas to the fans who listen by radio. They don’t deserve John Sterling and his ego. Unfortunately, we’ll have to deal with it for at least two more seasons after this one.

And to think, we almost had Vin Scully.

Jim Norton on the irritating Sterling