An umpire’s job is not easy. No matter where he’s positioned, he has to be on top of the game: the count, the outs, the men on base, the hitter at bat. He has to make instant calls on bang-bang plays, and if it’s a close play he has to face an irate manager. This is why umpires go through such a rigorous training period, which includes years, possibly a decade or longer, in the minors. There are measures in place to ensure that only the most prepared umpires make the majors.

Even after years of training and with decades of experience, umpires make mistakes. We have seen many of them in the past week alone. There were mistaken calls in Game 1 of the Angels-Red Sox series, Game 2 of the Yankees-Twins series, and Game 3 of the Phillies-Rockies series. As is the case with all blown calls, it had an effect on how the game unfolded. While the Yanks-Twins and Phils-Rox calls had a more direct impact on the game, even the Angels-Sox blown calls changed the tenor of the game. 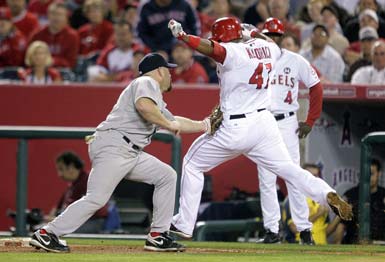 Game 1 of the Red Sox-Angels series featured three questionable calls by first base umpire C.B. Bucknor. The first came when Alex Gonzalez threw wide of Kevin Youkilis at first. Youkilis caught the ball while off the bag, but reached back and appeared to tag the runner, Howie Kendrick. Bucknor saw it differently, calling Kendrick safe. “He said I tagged him,” said Youkilis of Bucknor, “but he said [Kendrick] was on the base when I tagged him.” The replay clearly showed that wasn’t the case. Youkilis made the tag before Kendrick touched the bag.

Youkilis and Bucknor had another run-in later in the game. This time the grounder was to Mike Lowell, who threw high. Youkilis made a nice play to recover, and appeared to land on the bag before Kendrick (again). As Youkilis fell backward, Bucknor again called safe. Red Sox manager Terry Francona was more upset this time, and rightfully so. Replay clearly showed that Youkilis hit the bag before Kendrick.

In between those two plays, Bucknor made a questionable call that favored the Sox. With a runner on first, Chone Figgins laid down a bunt. Jon Lester fielded and threw to Dustin Pedroia, who was covering first. That throw went high, forcing Pedroia to leap for it, and it appeared Figgins touched before Pedroia landed. Bucknor called Figgins out. The latter said something to Bucknor, presumably something about a make-up call.

Almost every write-up I read of the game and the incident noted that the blown calls didn’t affect the outcome of the game, because neither team scored when they received the favorable calls. That ignores the extra toll on a pitcher. Jon Lester would have thrown fewer pitches had Bucknor got the two calls right at first on his side. Then again, he would have thrown more pitches had he gotten the Figgins call right. In any case, it most certainly does affect the outcome of the game, regardless of whether anyone scored in those innings. 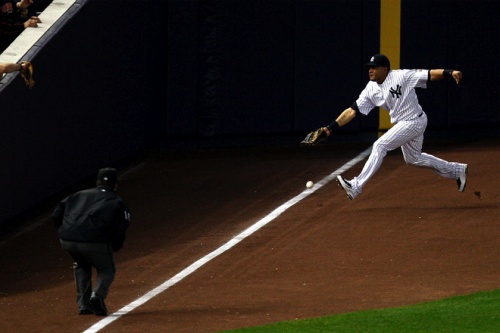 The Joe Mauer incident needs no explanation — we all saw it. Leading off the 11th inning, Joe Mauer sliced one down the left field line towards the line. Melky Cabrera chased, but could not catch the fly, which bounced off the dirt and into the stands. Left field line umpire Phil Cuzzi emphatically signaled foul as Yankees fans let out a collective breath. Replays came immediately, though, and they showed that not only did the ball bounce in fair territory, but it also grazed Melky’s mitt.

The picture above shows Cuzzi in perfect position to make the call. He was mere feet from where the ball landed. One explanation, NJ.com’s Steve Politi notes, is that umpires aren’t used to playing the lines. For 162 games during the season there are only four umpires. Only for the All-Star game and the postseason does MLB employ six umpires per game. That can make for some uncomfortable plays for the line umpires — during the 1996 World Series, Jermaine Dye couldn’t get around line ump Tim Welke, which allowed a Derek Jeter fly to land for a single. That led to a three-run inning, which set up Leyritz’s blast. But I digress. Damn nostalgia.

In his article, Politi talks a bit more about the two extra umpires, and it’s a worthy read. Rob Neyer expands the discussion. 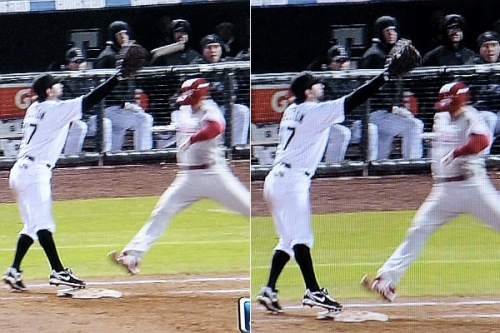 The latest is perhaps the strangest, because it involves one blown call and one questionable call, from different umpires, on the same play. The Phillies and the Rockies were tied at five in the top of the ninth, and Huston Street was on to face the top of the Phils order. With Jimmy Rollins on second with one out, Chase Utley chopped one in front of the plate. Street fielded and threw to Helton to seemingly retire Utley.

Starting at the end, the picture above shows that Helton kept his foot on the bag, and that he had received the ball before Utley touched first. Yes, that’s a close place, and obviously the human eye, in real time, doesn’t have that kind of precision. However, for the first base ump, Ron Kulpa, said Helton was off the bag. After watching the replay, it seems like a tough call. But, for Kulpa to say Helton was off the bag is to say that he definitively saw it. I’m not sure how he can make that call on such a bang-bang play. Replay showed that Helton did a good job to remain in contact with the bag when the throw arrived. Tough call, but blown.

The worse call is at the beginning of the play. Replay showed that the ball hit Utley while he was in the batter’s box, rendering it technically foul. Home plate umpire Jerry Meals didn’t see it, though, and none in his crew stepped forward and said that it hit Utley. Rollins advanced to third on the play, as he would have normally, but with Utley safe instead of either out or back at the plate, the Phillies found an opportunity. Ryan Howard hit a sac fly, and that was the difference in that game.

While these three games garnered national attention, we’ve seen plenty of umpire issues this year. These complaints range from the Yankees legitimate beef with Marty Foster to general outrage over the strike zone. TBS isn’t helping the latter situation with its PitchTRAX feature, which has showed umpires consistently calling pitches outside of the “zone” strikes. That seems to be a PitchTRAX issue, though. You can read more about TBS’s balls and strikes feature at Fack Youk.

I have to wonder, though, if umpire complaints are becoming louder because fans now have a forum to vent their frustrations. If an umpire blows a call, not only will the replay get airtime on multiple stations, but will also appear on the Internet — if not in video form, certainly the stills. Even if we’re not looking for information on blown calls, it’s right in front of our faces.

As for a potential fix, there doesn’t seem to be any in the offing. Bud Selig doesn’t want to expand replay, and beyond that there doesn’t seem to be a way to cut down on bad calls. With human umpires, they’re unavoidable. All MLB can do, really, is to carefully review umpires and hand out assignments based on merit. The umps might mean well, but accuracy trumps all.

An interesting story to watch going forward: Will Bucknor, Cuzzi, Meals, and Kulpa be disciplined for their calls? I’m not saying they shouldn’t umpire LCS games, but if MLB is serious about improving umpire performance, it would make sense to punish those who make bad calls.