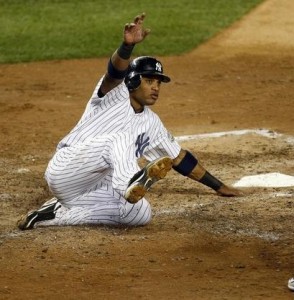 I was originally planning to put together a post looking at the Yankees’ baserunning in 2009 as a team, but once I started digging deeper and deeper, I found some really interesting stuff about Robinson Cano, so I decided to give him his own post. Don’t worry, the team-centric baserunning post will be up before long, but let’s take a look at the Yanks’ second baseman first.

As you probably already know, Cano is an atrocious basestealer. He was successful on just 5 of his 12 stolen base attempts in 2009, and for his career he’s just 17 for 38, a ghastly 44.7% success rate (break-even is 72-75%, depending on who you ask). This isn’t anything new either. Following an 11 for 13 debut as a sprightly 18-year-old in the rookie level Gulf Coast League, Cano stole just 11 bases in 19 attempts (57.9%) in the final 434 games of his minor league career. For a young and athletic middle infielder, the guy isn’t very good at swiping bases.

Baseball Prospectus has a stat for pretty much everything, including baserunning. Equivalent Stolen Base Runs (EqSBR for short) measures the “number of theoretical runs contributed by a baserunner above what would be expected given the number and quality of their baserunning opportunities,” which in English means it’s how many runs above average a player’s steals are. It’s not based on just bulk stolen base numbers, it factors in the game situation (a steal in a one-run game is greater than a steal in a ten-run game, a steal of third is better than a steal of second, etc.) while adjusting for park, batter handedness, the whole nine.

BP’s Equivalent Base Running Runs stat (EqBRR) encompasses all forms of baserunning, including steals, advancing on balls in play, moving up on wild pitches, stuff like that. It’s actually the sum of EqSBR and four other similar stats, but we’ll get to that in a minute. What’s important right now is how valuable Cano’s overall baserunning has been throughout his career. 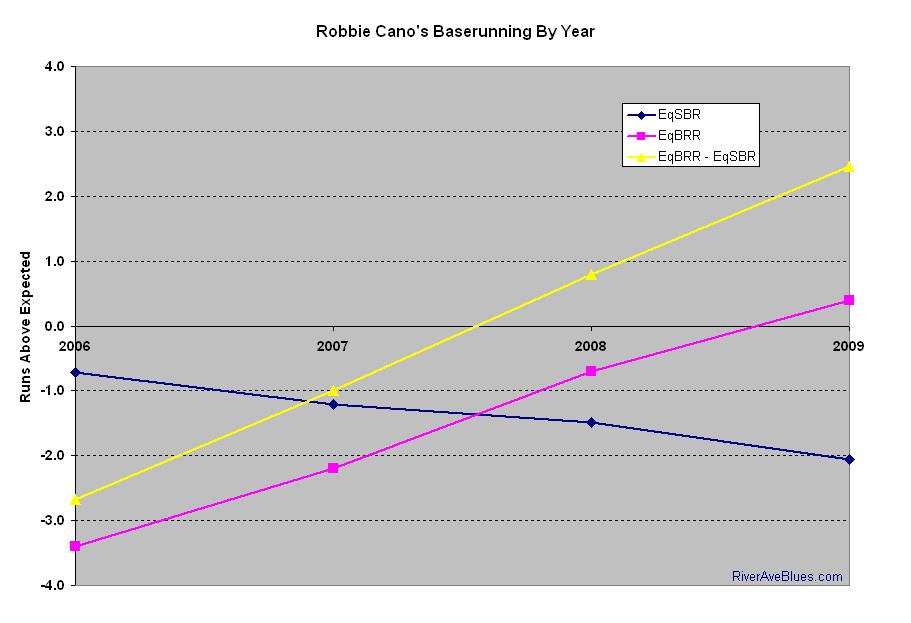 Well isn’t that cool. Despite getting worse and worse each year when it comes to stealing bases, Cano’s overall baserunning has actually gotten better as his career has progressed. Five years of engineering school allows me to deduce that Cano must have improved in the other aspects of baserunning (that’s the yellow line) for this to be possible (how’s that for analysis?). Remember when I said EqBRR is the sum of five other stats? Well let’s break it down into those individual components to see where the improvement actually is.

Everything in the chart is in runs, and I spared you the five-letter acronyms and just wrote out what each stat considers. There’s a stat for advancements made on groundballs to infielders (“Grounders”), sac flies (“Balls In Air”), base hits (“Hits”), and pretty much everything else (“Other”). “Stolen Bases” is just EqSBR. If you’re that interested, head over to BP’s glossary and you’ll find everything you need.

As you can see, the improvement in Cano’s overall baserunning comes from an improvement in his ability to take the extra base on sacrifice flies and base hits. Remember, these stats adjust for game situation and stuff, so Cano’s probably doing a better job of picking his spots as well. The slight dip in “Hits” this year isn’t much of a concern, because right now we have nothing to suggest it’s more than just a statistical blip. I’m thinking it might have something to do with the New Stadium; maybe he was being a little cautious not knowing what kind of bounces to expect.

Overall, Cano’s gone from costing the team nearly two runs (1.68, to be exact) on the bases in those situations (sac flies and hits) back in 2006 to adding nearly two runs (1.87, to be exact, again) to the team’s ledger in 2009. That’s a 3.54 run swing, which more than a third of a win. Considering how something so simple and easy to overlook as advancing on a wild pitch or going from first-to-third on a single can be, it’s quite an improvement. I’m not going to attempt to figure out what brought about this improvement, but I think we have to acknowledge that spending so much time around smart and veteran baserunners like Derek Jeter, Johnny Damon, and Alex Rodriguez has probably helped.

Whether or not this improvement continues or plateaus or even regresses remains to be seen, but right now the data is encouraging. And by no means am I making Cano out to be some great baserunner. In fact, the +0.4 runs his baserunning was worth last year is pretty negligible, he’s basically par for the course. That, however, is much better than costing the team runs on the bases, like he had been doing in years past. All I really want to do was point out that there’s been a definite improvement in his non-stolen base baserunning ability, and as far as I know, it’s going completely under-the-radar.

Obviously, pure speed is a big help when it comes to baserunning, but instincts and the ability to read pitchers also play a big part in running the bases. Cano’s not a burner, he never has been, but the data suggests that as he’s gained experience in the big leagues, he’s gotten better at taking the extra base on sac flies and base hits. It’s definitely something to keep an eye on as he enters his prime.

Now, if they could only get him to stop trying to steal bases…