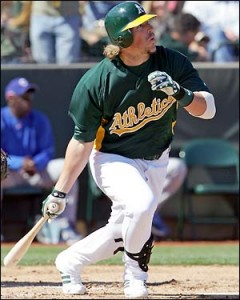 While Joe’s busy recapping possible leftfield options for 2010, I thought I’d go ahead and take a look at a player that could possibly help out the outfield down the road. Both Curtis Granderson and Nick Swisher are under contract for the next few years, but the Yanks don’t really have a long-term solution for that third outfield spot. Sure, it’s possible that Brett Gardner and/or Jamie Hoffmann assume that role, however it seems unlikely. Neither projects to be anything more than a reserve outfielder on a championship club, and at they haven’t shown enough to be considered anything more than that. And of course, there’s always pricey free agents.

Enter Travis Buck, the forgotten man in Oakland’s outfield picture. As it stands, the A’s are going into the 2010 season with the defense-heavy outfield of Rajai Davis, Coco Crisp, and Ryan Sweeney, and they have both Scott Hairston and Aaron Cunningham on the roster as well. Buck, after spending the last two years battling concussion issues and nagging injuries, has seemingly fallen into baseball purgatory despite his impressive track record and equally impressive skills.

A first round pick in 2005, Buck was starting on Opening Day for Oakland by 2007 after hitting .328-.398-.511 in 568 minor league plate appearances across four levels. The rapid promotion didn’t phase Buck at all – he hit .288-.377-.474 while playing everyday in rightfield – however his season ended in August because of a pulled hammy. His .369 wOBA matched Derek Jeter’s offensive output, and had him one stinkin’ point behind Carlos Lee and his nine-figure contract.

Unfortunately for Buck, he hasn’t been able to repeat that performance. He again started in right on Opening Day in 2008, but hit just .154-.197-.277 in 71 plate appearances before shin splints landed him on the disabled list and eventually back in the minors. In 2009 he hit .226-.287-.355 in his first 101 plate appearances before being demoted. Buck plays like nutcase, and suffered a pretty severe concussion when he ran into the wall while in the minors in 2008. He did that same thing again last year, and was dealing with post-concussion syndrome as late as this past October.

As you’ve probably noticed, Buck’s been hurt quite a bit. In addition to the hammy and shin splints and concussions, he’s also missed various amounts of time with a sore wrist, a sore thumb, a strained oblique, and bone chips in his throwing elbow (surgery). The good news is that his injuries are similar to Nick Johnson’s in that they aren’t related or evidence of a chronic, degenerative issue. Like Ryan Church though, we’re still not sure what kind of toll the concussions have taken.

Back when Buck was Oakland’s top prospect , Baseball America said the following on his ability as a hitter:

He has quick hands, strong wrists and outstanding pitch recognition. He has the bat speed to turn on good fastballs, yet trusts his hands enough to wait out breaking balls. The result is that he stays balanced, uses the whole field with a repeatable, low-maintenance swing and lashes line drives from foul line to foul line. As he gets stronger and learns to use his lower half better, many of his doubles should start going over the fence.

Buck hasn’t exhibited a platoon split in the big leagues (.772 OPS vs. RHP, .768 vs. LHP) and has been serviceable against lefties in the minors (.753 OPS). It’s clear Buck has the hitting tools to be an everyday outfielder, but it’s worth noting that his defense is very good as well. He has a +8.6 UZR in over 1,000 big league innings in right, and Total Zone has Buck as a +17 run defender at the position in his minor league career. The sample sizes for left and center are too small to say anything, but I’m sure he provides better than Johnny Damon-level defense in those spots. Baseball Prospectus says he’s cost the A’s two runs on the basepaths in 208 times on base in the big leagues, which for all intents and purposes means he’s a league average baserunner. Sadly, that would represent an improvement for the team as a whole.

I’m not 100% certain, but it looks like Buck will fall short of qualifying as a Super Two after 2010 (assuming he spends the entire year in the bigs), which means he has two more pre-arbitration years left and five more seasons of team control left overall. He also has one option remaining, which is always a plus. Acquiring Buck would be a move geared more towards 2011 and beyond than 2010, as the Yanks could use that remaining option to give him a full season of Triple-A at-bats. He could catch his breath at one level for once and focus on staying healthy while hanging out with former Arizona State teammate Colin Curtis.

As a lefthanded batter with decent pop, good defense, and very good on-base skills, it’s easy to see why a player like Buck would be a good fit for the Yankees. Plus it’s not like they’re loaded with outfield prospects in the high minors anyway. Given his health troubles, poor big league showings over the last two years, and Oakland’s crowded outfield, Buck might be a little undervalued at the moment. Then again, Billy Beane is a pretty smart dude, so maybe not. Hopefully Brian Cashman can pull off another ninja move to add a young hitter like Buck for depth.

Fan Confidence Poll: January 4th, 2010
By the Decade: The rise, fall and rise of pitching