River Ave. Blues » In the Bronx, building a team on a budget
The biggest WPA swings of the 2009 postseason
Suit over YES Network origins dismissed 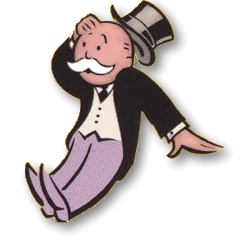 When the Yankees signed Randy Winn yesterday, the move kicked off a firestorm of comments. Even though pitchers and catchers are still three weeks away, even though the Yanks are the reigning World Series Champions, Winn’s signing sent shockwaves through the Yankee Universe. It meant the end of Johnny Damon’s tenure in pinstripes, and it proved, once and for all, that the Yankees are playing baseball on a budget this year.

For most baseball fans and writers, the idea of a team sticking with a budget is not cause for consternation. The vast majority of baseball teams — 29 of them, in fact — have operated under budgetary constraints. Some teams have more money to spend while others have to make the most of the funds available to them in order to remain competitive. That — and not the idea of OBP as the Holy Grail of baseball — was the driving thesis behind Moneyball. Still, no one blinks if a mid-market team has only $95 million to spend.

In the Bronx, though, things are different. The Yankees are on top of the world. They have a brand new stadium, a brand new World Series trophy, a top-rated regional sports network and an internationally-identifiable brand. They made the Yankee hat more famous than Jay-Z can. With this cachet of fame and success, the Yankees should not have a budget. Or so goes the baseball motif.

As we sit in 2010, though, life has changed economically since the glory days of the mid-2000s as the Yankees’ payroll kept climbing and climbing and climbing. First, George Steinbrenner has passed control of his team onto his sons. While Hal has the desire to win, he also recognizes the business needs of the Yankees. He knows that exceeding the payroll budget by a few million dollars also leads to a few million more in luxury tax payments. He knows that the team owes some debt service payments on their new stadium, and he knows that, prior to 2009, the Yankees’ operating income was a cool $3.7 million the red. With a $209 million payroll in 2008, the Yankees could not turn a profit.

In a few weeks, we’ll hear from Forbes about baseball’s 2009 finances, but considering the Yanks’ adherence to a budget this winter, the team is probably in a similar situation. Based purely on the stadium-centric finances, I believe the team is breaking even at the stadium with most revenue coming from their TV rights deals and the YES Network. So the Yankees have decided that they need a budget. It might be $200 million; it might be far greater what any other team will pay for their players; but it’s still a budget. With the economy in tatters around us, how hard is it to understand that the Yankees can’t just open up their checkbook with no regard for the fiscal impact of it?

For some people — Ken Rosenthal’s latest comes to mind — this is an inconceivable turn of events. For 40 years, the Yankees have spent, spent, spent. Why should a few million dollars stop them from reupping with Johnny Damon? Why would they go for Randy Winn instead? Mike had a fully rational explanation earlier today, but Rosenthal, a career baseball man, could not escape from the trope that the Yankees do not have a budget. Shockingly, they do.

In the end, it’s tough to say who bears the blame for Damon’s departure. Joel Sherman has written two articles (here and here) exploring the fallout from the Boras/Cashman dispute. The Yanks say they had made a few offers to Damon’s camp while Boras, not wanting to appear as though he overplayed his hand, claims he was more flexible than the Yankees say and that the Yankees didn’t really want Damon back anyway. Pick your side in that one. The truth remains that, in an era of fiscal problems, the Yankees do have a budget. They probably have room to improve at mid-season, but today, they are done spending. The money just isn’t there.