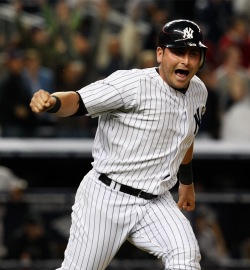 As the off-season winds down and we eagerly approach the first glimpses of Spring Training, we have little left to discuss in terms of the Yankees’ roster. The primary players are already in place. Eight for-sure position players, four for-sure pitchers plus two youngsters for the final rotation spot, and a solid core of relievers. With Brett Gardner currently slated to start the season in left and Francisco Cervelli tapped as the backup catcher, the Yanks have just three spots to play with.

As we’ve learned over the past few years, and especially last year, the bench means very little to start the season. Last season the Yankees opened with a bench of Nick Swisher, Melky Cabrera, Ramiro Pena, and Jose Molina. While that would have sufficed all season, even with the Melky-Gardner swap, things quickly changed. The Yankees will not possess this kind of depth in 2010, but 2009 was an aberration in that regard. Few teams, if any, have a player like Nick Swisher on the bench.

With Jerry Hairston in San Diego playing alongside his brother and with Eric Hinske gunning for playing time in Atlanta, the bench will not resemble the one that closed the 2009 season. Which is fine, because the bench that closed the season — Hairston, Gardner, Hinske, and Molina — shared only one common player with the Opening Day bench. Like Molina last year, Cervelli could go wire to wire on the bench. Considering the options the Yankees have right now, that might not be true of any other player.

How will the Yankees construct their bench to start the season? To answer we must first see how the left field situation plays out. The team says they’re eyeing a right-handed outfielder to caddy for Brett Gardner, and we’ve spent plenty of time analyzing those options. They could still add Johnny Damon, which would move Gardner to fourth outfielder, but adding one of the many right-handed outfielders would produce the same effect. Whether Damon or otherwise, that’s one of three bench spots.

The infield won’t be such a big concern. Alex Rodriguez, Derek Jeter, and Robinson Cano don’t take many days off. Last season Cano missed just one game and Jeter missed nine. A-Rod’s preseason injury limited him to 124 games, but when healthy he’s in there nearly every day. Since the utility infielder will play a game a week or less, the position isn’t that important, and is probably the reason the Yankees did not even attempt to retain Jerry Hairston. Ramiro Pena appears the favorite, but Kevin Russo could get a shot — though his lack of experience at shortstop might hurt his case.

The final bench spot could go one of two ways. The most likely is Rule 5 selection Jamie Hoffman getting a shot. Since they can easily return him to Los Angeles if he doesn’t work out, the Yanks will likely give him a shot unless someone else makes an overly compelling case during the spring. The alternative is Juan Miranda for some lefty power off the bench, but since he has an option the Yankees can afford to try out Hoffman. They can always bring up Miranda later.

Unlike the 2009 version, the 2010 bench will not feature any players who can adequately substitute in case of injury. When Nady went down last year they had Swisher to step in, but that is not the case this season. That’s fine, though. Any team that has a starter-quality player sitting on the bench is lucky and then some. Hell, there are teams that can’t even field nine adequate starters, nevermind hiding someone on the bench. The 2009 Opening Day bench was a luxury that we should not get used to.

Still, we know the Yankees have the tools to reconfigure the bench on the fly. Their bevy of mid-level prospect can help them obtain the right players from teams no longer in the hunt. It’s exactly how they acquired Hairston and Hinske last year. But, before they go do that, they can afford to see how the in-house options work. Who knows, maybe they won’t even need to swing a trade this year. If they do, they’ll certainly have options come mid-season.