For Derek Jeter, taking the ball to right field is an art. Even as I write this sentence, three months removed from live baseball, I can picture the swing. Jeter takes his stride, closes his shoulders, extends his arms, and slaps an outside pitch between the first and second basemen for a single. Sometimes he pokes it down the line for a double. Other times he gets a pitch that catches too much of the plate and he sends it over the short porch in right. No matter the result it still looks pretty, even most of the outs. 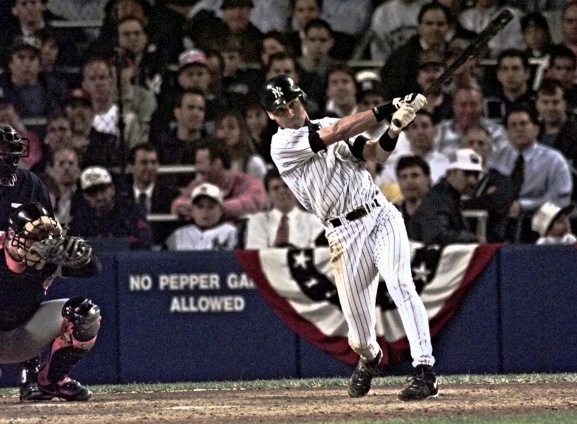 Can you guess what this is a picture of?

Thanks to FanGraphs splits, we can see exactly how good Derek Jeter is on balls hit to right field. It comes as no surprise that in 2009 he was excellent. He put 164 balls in play to right field, dunking in 46 for singles, slapping 11 doubles and a triple, and hitting 12 home runs (which, as a reminder, do not count as ball in play). That’s a .398 batting average. Moreover, it’s a .676 SLG, adding up to a .278 ISO and a 1.074 OPS. Those are pretty excellent marks, especially for a right-handed hitter going the opposite way. It made me wonder how other right-handed hitters fared.

The first name that came to mind, of course, was Albert Pujols. He’s been the best player in baseball for a few years now, so I assumed that this resulted from his ability to hit to all fields. Yet, after checking the numbers I was a bit surprised. Yes, Pujols demonstrates power to all fields, and he does hit the ball to left better than right. That’s to be expected. But on ball hit to right field he’s no match for the mighty Jeter. Pujols has a .305 BA against a .537 SLG for an ISO of .232. That’s good, but it’s not Jeter. For our purposes, we’ll conveniently ignore the vast discrepancy in their pull numbers.

What about other prolific righty sluggers? Mark Reynolds of the Diamondbacks posted a .260/.349/.543 line overall, good for a .284 ISO. To right field he posted a .333 BA and a .611 SLG, a .278 ISO that matches Jeter’s. I’d still hand Jeter the edge here 1) because of his BA and 2) because he did it in nearly twice the opportunities — Reynolds had only 91 plate appearances in which he put a ball into right field, while Jeter had 176.

Surprisingly, Jason Bay demonstrated good power to right field in 2009. As a right-handed hitter playing half his games at Fenway, clearly he posted better numbers to left field — a .466 ISO, which is nearly, but not quite, Pujolsian. He also posted a .262 ISO to right field, which lags behind Jeter a bit. Like most other hitters, Bay’s batting average to right wasn’t quite up to par, either, at .262, and he also had only 61 plate appearances in which he hit a ball to right field.

You know who killed the ball to right field? Nelson Cruz. He had 80 plate appearances where he hit a ball to right, and posted a .291 batting average and .646 SLG for a .354 ISO. The power came almost exclusively off home runs, as he hit nine to right. His only other extra base hit was a double. But, again, his sample was less than half of Jeter’s.

Among the more important points here is the ability to frequently take the ball the other way. It’s one thing that Jeter posts monstrous rate stats when hitting the ball to the opposite field. It’s quite another that he does it so often. He actually hit four more balls to right last season than he did to left. It makes me wonder why pitchers continue to work him outside.