River Ave. Blues » Past Trade Review: David Justice
New numbers for new players
The stats we use: WPA and LI 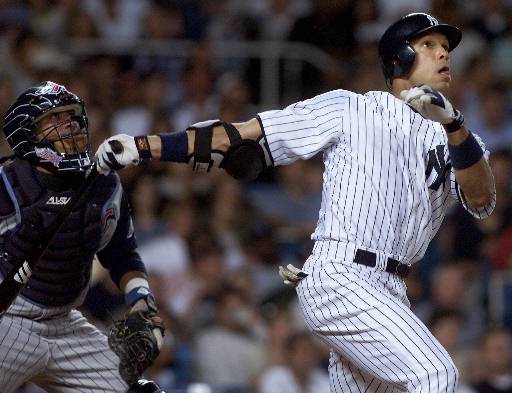 The Yankees were coming off two straight World Championships in 2000, however their offense was lacking compared to the past few seasons. Both Tino Martinez and Paul O’Neill were in the middle of their worst offensive seasons with the team, which hurt considerably in the lefthanded power department.

In need of a long ball threat, GM Brian Cashman tried to acquire Sammy Sosa from the Cubs and Juan Gonzalez from the Rangers, however nothing came to fruition. He then turned to Indians’ GM John Hart, who was looking to move the aging David Justice to free up a lineup spot for a pair of up-and-coming mashers named Russell Branyan and Richie Sexson. About a month before the trade deadline, the two sides completed the following deal…

Westbrook, then just 22-years-old and just six months removed from being acquired in the Hideki Irabu trade, appeared in just three games for the Yanks, allowing ten runs and 19 baserunners in 6.2 IP. He bounced back and forth between Triple-A and the majors for the next two years, and didn’t settle into a full-time role with the Indians until 2003. After taking over a rotation spot in mid-July of that year, Westbrook ran off a 13 start stretch in which he posted a 4.14 ERA. His peripherals weren’t good (34 K, 34 BB in 71.2 IP), but Cleveland’s days as a powerhouse were over, and they were looking for any young contributors they could find.

During his first six-plus years in the majors, Westbrook posted a perfectly league average 100 ERA+ in 130 starts and 40 relief appearances, chipping in close to 900 innings. The Indians gave him a big contract extension (three years, $33M) before he could reach free agency, however the team only gets credit for his first six years of control in the trade because that’s all they acquired. They negotiated the extension on their own after the fact. During those years of team control, Westbrook was worth 8.2 wins over a replacement level pitcher.

The 22-year-old Day was the Yanks’ fifth round pick in 1996, and at the time of the trade he had a 2.56 ERA with a 147-46 K/BB ratio in 119.2 IP split between Low-A Greensboro and High-A Tampa. He was one of the team’s better pitching prospects, and Cleveland sent him right to Double-A after the trade. Day never appeared in a single game with the Indians, who instead traded to the Expos straight up for Milton Bradley at the 2001 trade deadline. As you probably figured, Day contributed zero wins over replacement to Cleveland’s cause, though Bradley certainly helped.

Ledee, a 25-year-old platoon outfielder for the Bombers, was hitting .241-.332-.419 with seven homers at the time of the swap. His time with the Indians would be short lived though, as they flipped him to Texas for David Segui a month later. I remember hearing at the time of the trade that Ledee was the first player in history to play for three different teams that won their division the previous season in one year. He contributed just one-tenth of a win over replacement to the Indians’ cause.

His hot hitting carried into the playoffs, when he hit a solo homer off Kevin Appier in Game Five of the ALDS, pushing the Yanks further out ahead of the A’s and eventually sending them home. Justice completely torched the Mariners in the ALCS, picking up eight RBI in the six games. His three run homer off Arthur Rhodes in the 7th inning of Game Six turned a 4-3 deficit into a 6-4 lead, and the Yanks would eventually hold on for a trip to their third consecutive World Series. His efforts won him ALCS MVP honors, and a few weeks later the Yankees were World Champions.

That fall from grace happened the next season, when Justice hit just .241-.333-.430 with a then-career low 18 homers in 2001. The Yankees did get back to the World Series, though Justice was traded across town to the Mets for Robin Ventura after the season. In his year and a half in pinstripes, Justice provided the Yanks with 3.5 wins over replacement, almost all of which came during the second half of 2000.

Here’s a round up of the WAR data… 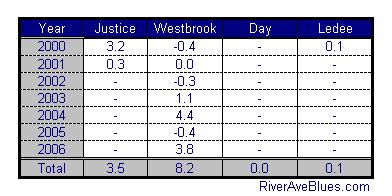 As you can see, Cleveland’s haul in the trade was more than twice as valuable as Justice was for the Yanks, almost exclusively thanks to Westbrook. However, just like the Chuck Knoblauch trade, the Yankees got exactly what they wanted out of the deal in the World Series victory.

There we times during the mid-2000’s that the Yankees could have really used an innings eater like Jake Westbrook in their rotation, but I wouldn’t have traded that Subway Series win for it. This one is another win-win; the Indians got six years of a league average big league starter plus more, and the Yanks got another championship. Both sides would do this one over time after time.

New numbers for new players
The stats we use: WPA and LI