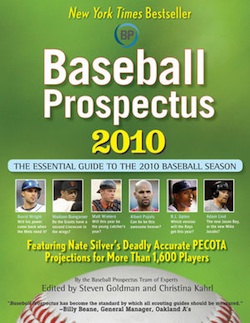 I arrived home last night at a little after 1 a.m. fully intending to go sleep, but when I walked into my building, I discovered with delight that my review copy of Baseball Prospectus 2010 had arrived. Sleep would have to wait. I spent around 45 minutes pouring through the latest edition of BP’s guide. Complete with PECOTA projections and pithy comments, the guide is, as always, an indispensable part of Spring Training.

Instead of droning on and on about the virtues of the book — or dwelling on the choice to go with a pea green cover this year — I’d rather just have some fun with it. Over the new few days, we’ll dive into the meaty part of the analysis offered by the Baseball Prospectus Team of Experts, but this weekend, I’ll bring you some selected projections and my comments. For what it’s worth, BP thinks the Yankees are “in a very good position to repeat.”

We’ll start today with some offensive lines and cover the pitcher’s projections tomorrow. Baseball Prospectus 2010 will be available in stores on February 22 and is already available for sale at Amazon

Derek Jeter — .286/.359/.401 VORP: 20 WARP 1.6
PECOTA is bearish on Derek Jeter simply because, as the book says, “only a handful of shortstops 35 or older have had great offensive seasons.” One of those shortstops was 35-year-old Derek Jeter, but his comps don’t scream out success at similar ages. If Derek can continue to defy aging, he’ll far exceed this conservative projection. If he matches the projection in his walk year, not only will be he worst professional season, but the Yanks will have some tough choices to make as well.

Nick Johnson — .279/.421/.423 VORP: 21.4 WARP: 2.3
As always, Nick Johnson’s biggest question marks surround his health. BP is critical of his ability to stay healthy, someting they call a skill “Johnson doesn’t have.” They wonder if the Yanks can “keep him on the field for 150 games,” but as a DH, he won’t suffer through the wear-and-tear of playing first. He’ll also have a nice Interleague Play-inspired vacation in June. On the bright side, PECOTA pegs him for 466 plate appearances.

Mark Teixeira — .294/.395/.541 VORP: 43.3 WARP: 5.0
Need I say much here? Basically, PECOTA expects Teixeira, playing his age 30 season, to duplicate his age 29 year. That’s not an unreasonable expectation, and if Teixeira can avoid a painfully slow start, he could be even better. PECOTA projects 35 home runs for the Yanks’ number three hitter.

Alex Rodriguez — .282/.388/.532 VORP: 39.4 WARP: 4.4
In all likelihood, A-Rod will outplay his projection. PECOTA pegs him for just 532 plate appearances because he’s playing his age 34 season and missed considerable time, albeit with a one-time injury, last year. BP calls him “one of the most valuable and essential players in the game,” but as the rest of us do, they question whether he’ll “justify every year of his contract.”

Jorge Posada — .263/.355/.445 VORP: 16.7 WARP: 1.6
The key stat here for Posada is the way PECOTA pegs him as a prime candidate for a collapse. He’ll turn 39 in mid-August, and his collapse rate is an alarming 37 percent. Comfortingly, though, his attrition rate is nearly the same. We’ll probably see something of a decline from Posada, but hopefully, it’s closer to an attrition dip than an all-out collapse. The Yanks are penciling him in for 120 games behind the plate. That might be optimistic, but BP is high on Francisco Cervelli’s defense as a caddy to Jorge.

Nick Swisher — .248/.370/.470 VORP: 26.2 WARP: 2.7
BP isn’t high on Swisher’s personality. They say he is “not master of his mental domain” and is far from “a frustration-free ballplayer.” But he excels at taking pitchers and working walks. He went to a full count in 22 percent of his plate appearances, fifth best in basebal, and his projected IsoD is topped only by Nick Johnson. If Swisher can get his head more into the game, he could have a breakout year.

Robinson Cano — .295/.343/.483 VORP: 27.8 WARP: 3.4
Cano, says BP, is “far better as setting the table than cleaning it.” He ranked 141st in RBI percentage and hasn’t been a productive player with men in scoring position for the duration of his career. If he could get on base more, the Yanks would probably bat him higher in the order to minimize his potentially rally-killing ABs. Still, he is a “flawed but valuable player” and could out-play his projection, which is weighted down by his terrible 2008.