Every so often we see an organization get stuck looking to fill one position for an extended period of time. The Red Sox have been searching for a shortstop ever since they traded away Nomar Garciaparra, and the Twins are still trying to find a solid third baseman to replace Corey Koskie. For a while the Yankees had their own positional problem, using a different Opening Day leftfielder every season from 1994 to 2003. That problem was solved when Hideki Matsui came aboard in ’03, and in recent years Johnny Damon had taken over the position, but with both of those stalwarts now playing elsewhere, the Yankees once again are left searching for a long-term leftfield solution. 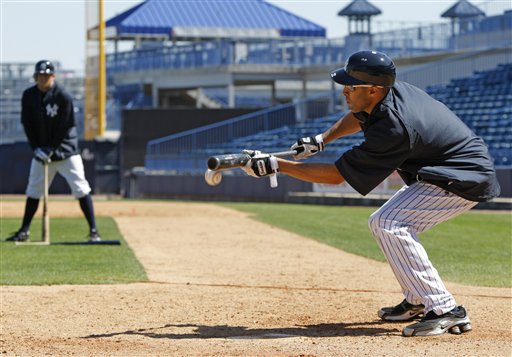 Typically considered a power position, the Yanks have instead decided to focus on defense in left. The tremendous offensive production they receive from the four up-the-middle positions allows them to take a bit of a hit in one of the corner outfield spot. With the speedy Brett Gardner already in-house, the team opted to complement him with free agent signing Randy Winn, who managed to be close to a two win player in 2009 despite a .302 wOBA because of his superlative defense. Add in Rule 5 pick Jamie Hoffmann, and it’s clear the Yankees made a conscious effort to improve their defense when replacing Damon in left.

Gardner played nothing but centerfield last year, saving 7.2 runs in 628.2 defensive innings. Winn, on the other hand, saved 16.6 runs in just under 1,200 defensive innings for the Giants. Unlike Gardner, he shifted around and spent time at all three outfield spots. Looking at three-year UZR, we’re talking about 55.2 runs saved in just over 4,700 defensive innings combined between these two, so clearly the defensive ability is there. Jeff Zimmerman’s age-adjusted UZR projections peg Winn as a +2.0 UZR defender in left next year, and Brett Gardner as perfectly average at the position. Both players project to be better defenders at different positions (Winn in right, Gardner in center), but the Yankees aren’t about to shift Curtis Granderson and/or Nick Swisher around for marginal improvements with the glove. These projections seem a little light, but let’s roll with them.

Aside from defense, the other aspect of the game where these guys excel is on the bases. Gardner stole 26 bases last year (83.9% success rate), and according to EqBRR he was worth 4.9 runs in all baserunning situations, 11th best in baseball despite being a part-time player. Believe it or not, Winn is just as much of a threat on the basepaths, having stolen 16 bases with an 88.9% success rate in 2009, and his 4.8 EqBRR was a tenth of a run behind Gardner for the 12th best in the game. No matter which player the Yankees have patrolling leftfield next season, they’re guaranteed of getting solid (or better) defense with top of the line baserunning.

Offensively, we have a different story. Let’s review some projections, starting with Gardner…

After posting a .270-.345-.379 batting line with a slightly above average .337 wOBA in 2009, the five freely available projection systems see Gardner basically repeating that performance. It’s slightly above league average overall but generally below average for a corner outfielder. Combine the offense with the +0.0 UZR projection and say another +5.0 runs on the bases, and Gardner’s looking at a 1.4 WAR season. The shift from center to left decreases Gardner’s value more than anything. It wouldn’t take much to get him over the two win plateau, just a slightly better than league average UZR and another 50 or so plate appearances of similar production.

Now for the grizzled vet…

Winn’s offense doesn’t project to be as good as Gardner’s because of a 20 point difference in on-base percentage, but the good news is that they see an improvement over his .262-.318-.353 (.302 wOBA) performance from last year. Granted, the .316 wOBA projection is nothing to brag about, and when combined with a +2.0 UZR and say +5.0 runs on the bases, you get a one win player. Nothing to get excited over, but not a bad return on a minimal investment ($1.1M) at all.

Of course, figuring out the actual production the Yanks will get out of leftfield is slightly more complicated because Gardner and Winn will presumably split playing time. If Gardner gets say, two-thirds of the playing time, Joe Girardi’s club is probably looking at two wins total for the position, which for all intents and purposes is league average. That doesn’t account for Marcus Thames and/or Jamie Hoffmann, both of whom are trying to state their case for a job this spring. Since both players are projected to perform at replacement level next year, we really don’t have to worry about them. Anything the Yanks get from either is gravy.

For the most part, whoever the Yankees send out to leftfield on a given day will be their weakest player on the field. However, given their strength up-the-middle and two .400 wOBA corner infielders, they can afford to add another to dimension to the team in the form of strong defense and elite baserunning. I don’t expect them to have nine different Opening Day leftfielders in the next nine years like they did a decade ago, but what the Yankees have right now isn’t anything more than a stopgap.