Building a bullpen is a far from an exact science. After enjoying the left-right tandem of Mike Stanton and Jeff Nelson in front of Mariano Rivera during the late-90’s, the Yankees stumbled through the overpaid (Steve Karsay, Kyle Farnsworth), the overworked (Tom Gordon, Paul Quantrill, Scott Proctor, Luis Vizcaino), and the overmatched (Tanyon Sturtze, Juan Acevedo) before going back to the drawing board. They left the overpriced retreads in the past, and instead began hoarding interchangeable (and cheap) relievers with good stuff. Now in it’s third year, the bullpen plan has yielded some long-term pieces, and allowed the team to bring in establish veterans to fill in the gaps rather than carry the torch. 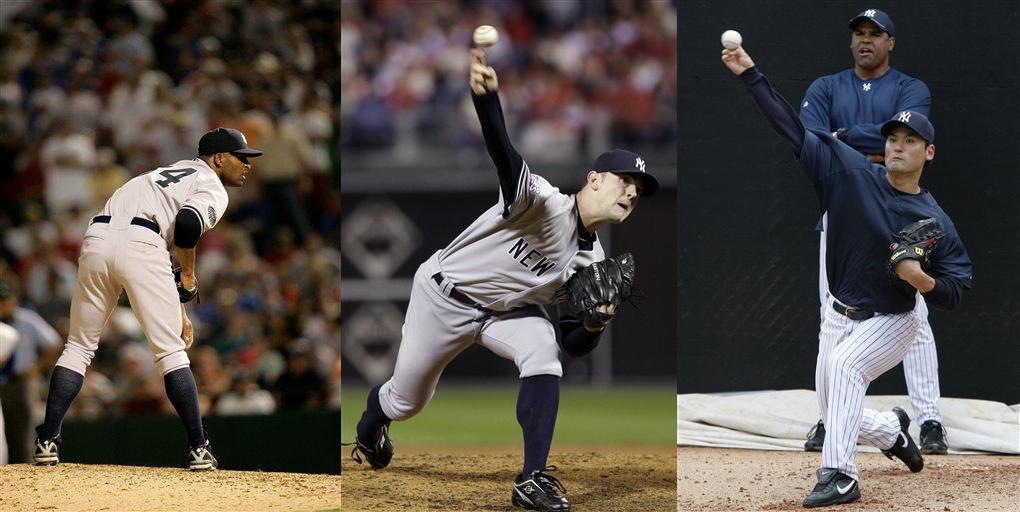 Joe Girardi will have his choice of relievers to use in the late innings this season, perhaps led by the soon to be 25-year-old David Robertson. Part of the epiphany draft of 2006 that has already produced five big leaguers, three pieces of trade bait, and one other player on the team’s 40-man roster, Robertson came into his own once he was called up from Triple-A Scranton for good last May. After getting his feet wet by striking out four batters and allowing just one hit in his first four innings following his callup, Robertson struck out 15 of the next 34 batters he faced, and by the end of August he was sporting a 13.28 K/9 and an ERA around 3.50 (3.28 FIP).

Because of the depth in the bullpen, Robertson was routinely used in the 6th and 7th inning of close games and to finish off contests when the team had a bit more of a cushion. He led the American League with a 12.98 K/9 (min. 40 IP), and only twelve AL relievers bested his 3.05 FIP. Although he appeared in only five games during the postseason, Robertson escaped a bases loaded, no out situation against the Twins in Game Two of the ALDS, and won Game Two of the ALCS with an inning-plus of scoreless relief.

The biggest negative about Robertson’s game is that he can get a little too liberal with walks, though his 4.7 BB/9 last year was a full walk worse than his 3.6 minor league mark. It’s worth noting that he did cut his walk rate down to just three batters per nine after July 24th last year, covering his final 21 innings (out of 43.2 total, so basically half his season workload). Robertson’s strikeout rate is right in line with his minor league performance, though his .347 BABIP in 2009 was pretty high, so maybe his .226 batting average against stands to come down some. He also shows a reverse split (3.70 FIP vs. RHB, 2.74 vs. LHB), which is always pretty nifty.

Here’s what the projection systems say…

That’s a quality relief pitcher right there. The walks are still high because of his limited big league track record, but the strikeouts are through the roof as well. As a fly ball pitcher, Robertson will always be a bit homer prone, though that’s hopefully something that can be improved with age. The projected performance is better than what most teams have available for their 8th inning, but there’s a chance K-Rob won’t be anything more than a 7th inning guy in the Bronx this year.

After pitchers and catchers showed up for work in Tampa, the Yankees jumped all over an undervalued free agent and signed 36-year-old Chan Ho Park to a one year deal worth just over a million bucks. A middling starter for most of his career, Park has posted a 3.29 ERA (3.70 FIP) with a 7.55 K/9 and a 2.30 K/BB ratio in over 120 innings as a reliever in the last two years. His velocity clearly plays up in relief, and last year he stranded all but four of the 21 runners he inherited (81%). Let’s look at the projections…

Park’s projections are a little screwy because of the time he spent as a starter in recent years, but rest assured, the Yankees will use him exclusively in relief (unless there’s a meltdown of biblical proportions in the rotation). Even if Park were to pitch to his projection, the Yankees could deploy him in low leverage situations or easily boot him off the roster. However, I suspect Park will outperform his projection, and will likely fill a role similar to what Al Aceves provided in 2009.

In addition to Robertson and Park, the Yankees also carry one of the game’s best lefty relievers in their bullpen. After battling shoulder trouble and general ineffectiveness early in his stint in pinstripes, Damaso Marte proved his worth and showed everyone what he was capable towards the end of 2009 and into the playoffs. He posted a 5.62 ERA after coming off the disabled list in mid-August, but that’s misleading because four of the five runs he allowed came in one disastrous outing. Overall, he had a 2.58 FIP and a 7.88 K/9 after returning, and went on to be nearly perfect in the postseason, retiring all but the first two men he faced.

At 35-years-old and a veteran of 540 big league appearances, Marte has proven to be death to lefthanders. He’s held them to a .197-.294-.287 batting line against during his career, and was even better than that in 2009 (.120-.214-.280). If he stays healthy, which is admittedly far from a given (shoulders are scary), Marte will be a major weapon in a division that features such lefty mashers as Adam Lind, Nick Markakis, Carlos Pena, and the corpse of David Ortiz. His performance against righties has improved as his career has progressed, but with guys like Robertson and Park aboard, Girardi shouldn’t have to deploy him against hitters of the opposite hand too often.

Clearly, the projections see Marte working primarily as a lefty specialist, hence the low innings totals but relatively high number of appearances. Much like every other pitcher, limiting Marte to specific and specialized situations will only increase his effectiveness. At $4M, he’s the sixth highest paid pitcher on the team and most expensive non-Mo reliever, so he’ll be expected to pitch more than capably in whatever capacity he’s used.

The Yankees head into the 2010 season with a three-headed monster at the back of their bullpen, and that doesn’t even include Aceves or the loser of the Phil Hughes/Joba Chamberlain fifth starter battle. It’s clear that the team views Robertson as a long-term fixture, maybe even a future closer, while Park is just a short-term fill in, the product of a market inefficiency. Marte is under contract for at least the next two years, but contract status is a mere formality. All three of those guys are capable of handling late inning duties by themselves, yet the Yankees have the luxury of being able to deploy all three.