By most appearances, the Yankees were sitting pretty at the 2004 trade deadline. They were 64-38, 7.5 games ahead of the second-place Red Sox and 6.5 games ahead of the next closest AL competitor. On the night before the deadline they defeated the Orioles 2-1 on the strength of a Kevin Brown performance, his first start after spending more than a month on the DL. The team looked poised to win its seventh straight AL East title.

Still, the team had a major weakness in its pitching staff. They had allowed 500 runs through July 30, the second worst mark among teams above .500. It was also 10 runs worse than the Red Sox, while the Sox had outscored the Yankees by 10 runs to that point. That must have made the Yankees feel a little less secure in their position. In fact, it led them to seriously discuss a Randy Johnson trade with the Diamondbacks.

By July 28, however, it was apparent that Johnson would remain in Arizona. But that wouldn’t stop Brian Cashman from attempting to improve the team’s pitching staff. As he commented around the time the Johnson talks fell apart, “Right now, I’m exchanging ideas with other G.M.’s [sic] and trying to improve our club.” When that quote appeared in The New York Times, few of us could have guessed the mystery pitcher. A day after publication, a minute before the 4 p.m. trade deadline, we found out, though the more surprising aspect was the player the Yankees traded away. 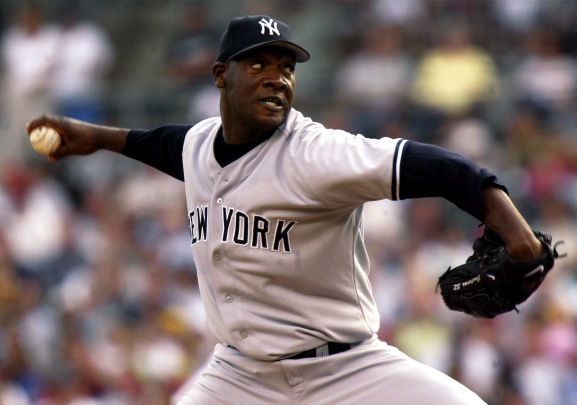 The Yankees signed Jose Contreras to a four-year, $32 million deal in the winter of 2002, which led to the now infamous Evil Empire declaration from Larry Lucchino. Because the rotation was so crowded, Contreras started the 2003 season in the bullpen, though he didn’t get much work early in the season. In just eight relief appearances he allowed 11 runs, six in three appearances against the Jays and five in one appearance against the Red Sox. He transitioned to the rotation at the end of May, and in his first two starts he allowed two runs over 14 innings, striking out 12. But he strained his subscapularis, causing him to miss over two months. Upon his return he pitched well in all but one start. Of course, that one came against Boston.

In 2004, however, Contreras could not put it together, which hurt particularly because the Yankees were relying on him. They had lost Roger Clemens, Andy Pettitte, and David Wells over the off-season and needed Contreras to hold down a spot atop the rotation. After a two-out start against Baltimore on June 2, Contreras held a 7.11 ERA, having pitched just 31.2 innings over eight starts. He recovered a bit after that, bringing his ERA down to 4.84 after a July 20 start against the Devil Rays, but then surrendered 15 runs over 12 innings in his next two starts against Boston and Baltimore. With their rotation reeling — even Tanyon Sturtze had gotten a start by that point — the Yankees needed an upgrade.

Brian Cashman and White Sox GM Ken Williams got a bit creative in their deadline deal. Instead of swapping prospects for veterans, as we often see, they decided to swap underperforming vet for underperforming vet. The White Sox received Contreras, plus $4 million, while the Yankees received 2003 Cy Young runner-up Esteban Loaiza. Even though his 2004 season more resembled his spotty past than it did his stellar 2003, he was still out-pitching Contreras. Plus, he would hit free agency after the season, which left the Yankees some flexibility.

The deal could not have backfired worse. Loaiza jumped right into the rotation, much to the joy of opposing hitters. He allowed 22 runs, 20 earned, over 24.2 innings in his first five starts, striking out 16 to 13 walks and 6 home runs. In other words, he had the FIP, 6.71, to go with the ERA, 7.30. After surrendering four runs in 4.1 innings to the Jays on August 27 the Yanks removed him from the rotation, though his bullpen stint went just as poorly. He made just one more start that year, but he probably wouldn’t have gotten even that had Kevin Brown not broken his hand punching a wall.

Loaiza’s only saving grace that year was the playoffs, in which he allowed just one run over 8.1 IP. Then again, that was a pretty important, the game-winner against Boston in Game 5 of the ALCS. The Yankees let him walk after that season, meaning all they got out of the deal was two months of horrible pitching, followed by a decent playoff run marred by one enormous run.

Contreras had his troubles in Chicago, keeping his ERA pretty consistent up until his last start, an eight-inning, zero run performance against Kansas City. The next year, however, is when the Yankees regretted the deal. As they ran through a series of scrubs because of various injuries to their pitching staff, Contreras pitched very well for the White Sox, racking up 204.2 innings with a 3.61 ERA (3.89 FIP). His ERA did rise to 4.27 in 2006, the final year of the contract he signed with the Yankees, though his FIP was right around his 2005 mark, 4.00. Though the Yanks’ staff was a bit better that year, they certainly could have used a performance like that in the middle of the rotation.

While the need to improve the pitching staff in 2004 was evident, the Yankees did not win in this trade. The pitcher they acquired was actually worse than the one they traded away. The move did save the Yankees about $15 million in future salaries, but considering the state of their pitching staffs in 2005 and 2006, I’m sure they gladly would have paid that money to Contreras. We can decidedly stick this one in the loss column.

Completely unrelated to the topic at hand: We made a few design changes to the site tonight, and some of them are being a little bit pesky as they come online. Right now, the site is rendering a-OK for those using most browsers, but if the menu links are coming up unformatted with text bleeding into the main column, clear your browser cache and hit refresh. If that doesn’t do the trick, contact us with your browser and operating system info and a screenshot of the problem.