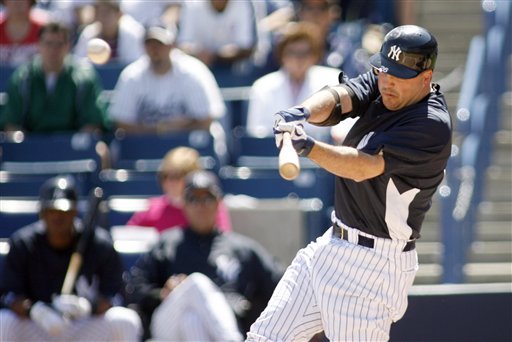 There’s nothing better than baseball on a lazy, rainy Sunday. Even if it is just Spring Training baseball.

CC Sabathia will take the mound for the third time in the exhibition season after getting touched up for nine hits, three walks, and five runs in 4.1 IP during his previous two outings. He said he was having a problem collapsing on his back leg, which left his pitches flat and up in the zone, so let’s see if he corrected that.

Meanwhile, Nick Johnson has been the team’s most impressive hitter in March after working with Kevin Long to use his legs a little more in his swing. He’s 5-for-11 (.455-.571-1.182) with two homers, two doubles, three walks, and just one strikeout, and even his outs have been hard hit. Johnson has more walks (432) than strikeouts (410) since 2003, which is pretty cool, though I’d expect it to change as he faces AL East pitching.

Jeter, SS
Johnson, 1B
Cano, 2B
Swisher, RF
Thames, LF
Gardner, CF
Winn, DH
Cervelli, C
Vazquez, 3B – yeah, that Jorge Vazquez, who has played four games at third since 2003 … should be fun

According to a release, MLB Network has lifted the NY/NJ/CT area blackout on today’s game, so it’ll be shown live at 1:05pm ET. We’ll just have to deal with the Fox Sports Net Pittsburgh broadcast. Enjoy the game.