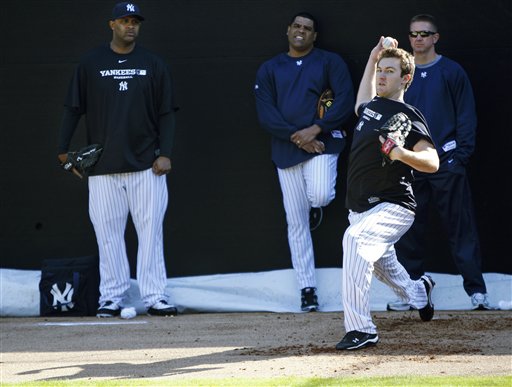 One of the ongoing themes of Spring Training has been Phil Hughes and the possibility of being sent to the minors in 2010 to pile up innings. In his Chan Ho Park post earlier this morning, Ben wrote about just that, so allow me to excerpt…

For the Yanks, the best AAA candidate would seem to be Phil Hughes. He has an innings limit and should be working as a starter for as long as he can this year. If that means starting the year at AAA and being the first arm called up, that’s a risk I’d be willing to take. The Yanks could send Aceves down and keep Hughes in the 8th inning role, but this move reeks of short-term planning at the expense of long-term success. Last year, the Yanks’ pitchers enjoyed unexpected health. Can we expect them to do it again this year?

No, we can’t expect them to do it again this year, however keeping Hughes in the bullpen to start the year isn’t just a short-term move. If a starter were to go down, there’s Chad Gaudin, or Al Aceves, or Sergio Mitre, or Ivan Nova to fill in. There’s no shortage of candidates to make a spot start or three. However, if a starter were to go down for an extended period of time, well then you can stretch Hughes out to start. There’s no reason it can’t be done. Everyone’s all freaked out after Joba Chamberlain hurt his shoulder in 2008, but that’s one data point in a sea of them. There’s no evidence that moving back into the rotation caused Joba’s shoulder to bark. He’s a pitcher, it could have started acting up for a million reasons.

Just last year, we watched Bobby Parnell, Justin Masterson, J.A. Happ, and Scott Feldman start the season in the bullpen before moving to the rotation. Jonathan Sanchez, Carlos Zambrano, Johan Santana, Roy Halladay, Roy Oswalt … all those guys make the transition during the season as well. It can be done. Pretty easily too. But I digress.

There’s several reasons the Yanks shouldn’t send Hughes down to the minors. First off, he’s one of the seven or eight best pitchers in the organization, top to bottom, and the best big league ready arms should always good north when the club breaks camp. Secondly, the single most important thing a young pitcher must learn how to do is get big leaguers out. That’s it. If he can’t get Major League hitters out, then he’s hurting the team. If Hughes’ spends the season in Triple-A Scranton getting stretched out in advance of filling a rotation spot in 2011, then what do you have? You have a guy who can give you 170 innings next year, but may or may not know how to pitch out of jams and what not.

Sure, it sounds fine. He’d just be the fifth starter after all. Those guys aren’t crucial. But what’s the alternative? Hughes spends the season in the bullpen, at worst, and next year you’re looking at a guy who can give you say, 130-140 innings that will probably be a bit better because he’s more experienced. Hughes has nothing to learn in the minors, at all. He can throw 35 changeups a game, but big deal. Throwing changeups to in big league situations is different than throwing them to minor leaguers. And there’s no rule against throwing changeups out of the bullpen. He can still work on it.

Look, I want Phil Hughes to be a starter for the long haul as much as the next guy. I just think that the minimal gain you get towards his future innings limit is completely negated by missing out on all of that experience against big leaguers. We know Hughes can go through a lineup three times, he’s done it his entire life in the minors. All he’s going to do in Triple-A is spin his wheels. You don’t learn anything from carving guys up, you learn from making mistakes and getting smacked around a bit. Keeping Hughes in the Majors to start the year puts the best team on the field and is the best thing for his development.

Frankly, I’m kind of astonished I had to write this post. There’s a lot of dumb ideas tossed around in Spring Training because there’s nothing else to talk about, and this is the perfect example of that.