There were a few moments in the ninth when it didn’t seem like the Yankees would see extra innings. The Sox nearly ended it a couple of times, but the Yanks hung in there and took advantage during Papelbon’s second inning of work. I’ll take a win against the Sox any way it comes, but it’s so much sweeter when Papelbon is the goat.

After a 10-pitch, 1-2-3 ninth inning, Jon Papelbon got the call to face the bottom of the Yankees’ order in the 10th. He had already taken care of the heart of the order, retiring A-Rod, Cano, and Posada in the ninth, so he had a seemingly easier task ahead of him. With the Yankees’ order, though, there is no soft spot. Every hitter can do serious damage. Curtis Granderson, the No. 7 hitter, proved that almost immediately.

Papelbon opened the at-bat with a fastball low in the zone, his 10th in 11 pitches. Granderson fouled it off. Once again Papelbon went with the fastball, this time leaving it up in the zone. Victor Martinez set up low, but it looked like Papelbon just missed his spot. Granderson sent it well over the right field wall, giving the Yankees the lead and leaving the game up to Mo. That’s never a bad thing.

For three full innings the Sox held a 1-0 lead. John Lackey didn’t exactly work efficiently, but the Yanks couldn’t get anything going off him. Then, in the seventh, with Lackey’s pitch count at exactly 100, the Sox went to the bullpen. With two lefties and a switch hitter due up, Francona went to Scott Schoeneweis. He did his job against the two lefties, striking out both Robinson Cano and Curtis Granderson. His trouble, however, came from Jorge Posada, who doubled on a slider right in his wheelhouse.

With another switch-hitter, Nick Swisher, due up, Francona went to Dan Bard to finish the inning. He started Swisher with a 97 mph fastball on the inside edge, which Swisher fouled away. The next pitch was similar, though it caught a bit more of the plate. Same result. The third pitch had a bit more zip, registering at 99 mph, but again Swisher fouled it off. For the fourth and final pitch, Bard took a little bit off. The pitch registered at 91, but it featured a bit more movement than the previous three pitches. Movement or not, though, it was right over the heart of the plate and Swisher slapped it on the ground to right.

The ensuing play would have been more comical if 1) it wasn’t close and 2) if Jorge hadn’t hit the ground hard. J.D. Drew’s throw home was a bit up the line and Victor Martinez had to reach out to get it. Jorge was just about at the plate by that point, and the two got a bit tied up trying to avoid a big collision. The ball rolled away and Jorge touched up to tie the game.

David Ortiz gave us all a chuckle with his expletive laden rambling last night, but in the third inning last night he was no laughing matter. Dustin Pedroia doubled down the left field line to open the inning, but Andy Pettitte came back to retire Victor Martinez and Kevin Youkiis. To escape the frame without damage all he had to do was retire David Ortiz, 0 for the season at the time with just one walk.

Pettitte started the at-bat with a low fastball called for strike one. Then he went to the cutter, throwing it three straight times and getting one swing and miss, bringing the count to 2-2. For the fifth pitch he went back to the fastball, this time looking inside. This one didn’t have as much life on it as the first pitch, which allowed Ortiz to extend his arms and smack it to right. Were Jesse Barfield in right he probably would have gotten Pedroia at the plate. Nick Swisher, however, didn’t get nearly enough on the throw and the Sox took an early 1-0 lead.

As John Lackey’s pitch count rose it looked like the Yankees were finally getting to him. Derek Jeter led off the sixth by working a 2-2 count, reaching base when Lackey hit him in the back. Nick Johnson, looking for his first hit smoked the seventh pitch of the at-bat to right. It was within J.D. Drew’s range, though. Teixeira then walked, putting runners at first and second with one out for A-Rod, hitless so far on the night.

It looked like the Yanks had Lackey on the ropes. He had already thrown 17 pitches in the inning and his first pitch to A-Rod would be his 99th. Yet A-Rod swung at the first pitch. It was somewhat in his wheelhouse, a 91 mph cutter on the inner half. He only managed to foul it away, though. Lackey came back with another hittable pitch in about the same location, this time a four-seamer, but A-Rod didn’t put a good swing on it. A grounder to third meant an around the horn double play, ending the threat.

In addition to having the biggest negative WPA play for the Yankees, A-Rod also had by far the lowest total WPA, -.279, more than 10 percent worse than Cano’s -.137.

Don’t judge him by one appearance

Chan Ho Park faced his share of criticism after serving up a home run to Dustin Pedroia on Sunday night. He got the night off on Tuesday while Al Aceves worked his multi-inning magic. Park found himself in that same role last night. He took over in the seventh after Andy Pettitte battled through six innings, but this time he didn’t disappoint.

He didn’t exactly pitch his three innings gracefully. He did face only 10 batters, with Marco Scutaro batting twice. Of the nine outs he recorded seven were in the air, and a few of them came a little close to the wall for my liking. But he did get the job done. J.D. Drew collected the only hit of the outing, and while Mike Cameron and Adrian Beltre gave us a bit of a scare, well, no harm no foul. Also, no one would have even left their seat at Yankee Stadium on Cameron’s fly.

It helped, too, that as soon as Park finished his job Granderson gave the Yankees the lead, thus giving Mo the ball. I hope to see more instances of Park and Aceves pitching multiple innings. Why take the ball away if they’re pitching well?

Victor Martinez. After hitting Burnett hard last night, he was the last guy I wanted to see up with runners on first and second with none out in the fist. Pettitte got him to ground to third, though, and A-Rod tossed it around the horn for two outs. I wondered if he would take it to third, killing Ellsbury, before throwing across the diamond. With Martinez running he had a chance. Best, though, to take the surest path to multiple outs.

Pettitte’s final inning start off annoyingly, with Adrian Beltre singling, but it ended wonderfully. J.D. Drew grounded an 0-1 curveball to Cano, which started a double play. After he struck out Mike Cameron I did a little fist pump. So did Pettitte.

I never want to see someone get hit in the head, but if it’s going to happen at least let it be like Pettitte’s fastball off Youkilis’s head. The 90 mph fastball seemed to get away from Pettitte. Youkilis was in the process of ducking, so he was moving away from the impact. Otherwise, it wouldn’t have been a laughing matter. All I could think at the time was, “schtoink!”

Then I smiled some more when Pettitte struck out Ortiz to end the inning.

Mo for the second night in a row.

A-Rod. His fly outs in the first and fourth didn’t look to bad, but from the double play on he took some weak hacks. None, of course, was as costly as the DP.

Dustin Pedroia and his tiny strike zone. It would annoy me a lot less if he wasn’t a damn good hitter.

Adrian Beltre hitting the ball hard almost every time up.

Friday night at 7 the Yanks head into Tampa. Javy Vazquez goes for the Yanks against David Price for the Rays. 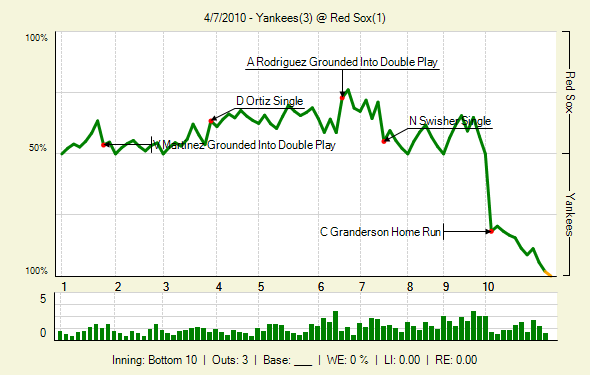 Check out the full WPA breakdown at the FanGraphs box score.