For a little more than a full inning, it felt like the Yankees were going to drop yet another game in which their offense did nothing. As John Sterling mentioned, that’s unfair to the Blue Jays pitchers. He also said that intentionally walking the bases loaded was a “sound strategy,” so I’m not sure I should use him as a reference point here. But he does have a point. Cecil, Romero, and Morrow are three talented pitchers who, if they continue developing, could anchor the Jays’ rotation for years to come.

Thankfully they did put together that odd rally in the eighth. Vazquez got the win, the Yanks avoided the sweep, and now they get to chill, perhaps at home, on an off-day before making the short trip to Baltimore.

Jason Frasor threw Robinson Cano a hittable fastball. You can complete the story from there. But plenty led up to the moment.

The story of the eighth is actually one long, bizarre tale that you probably wouldn’t believe if there weren’t video evidence. Somehow the Yankees scored four runs while tallying just two hits. Both hits, as you can imagine, resulted in big RBI. That means every other runner reached base in an alternative manner. And it all started with a HBP.

Brandon Morrow’s ceiling is no lower now than when the Mariners drafted him in 2006. Maybe the chances that he reaches that ceiling are lower, but the same ceiling still exists. Today we got a preview of what that ceiling could look like, and for the top dogs in the AL East, it was not good news. Through seven innings Morrow had allowed just five baserunners, four hits and, more importantly, just one walk. He had used 99 pitches, so odds were he’d be done soon after he started the eighth. After getting ahead of Francisco Cervelli, Morrow let a fastball get away from him, and it nearly hit Cervelli in the helmet. It just missed, nicking off his shoulder, which meant he got to take first base without major incident.

That was it for Morrow, who handed the ball to Cito Gaston, who handed it in turn to the lefty Scott Downs. Brett Gardner stepped in and took a slider well outside for ball one. Downs then came back with a fastball up and in, but it hit Gardner, giving the Yankees the opportunity they needed. The top of the order was due up with the tying run, who potentially could score on a double, standing on first base. Downs set up Jeter with fastballs. Jeter swung at none of the first three, and two crossed inside the zone.

With the count 1-2 Downs threw a slider low and away. It might not have been a terrible pitch to another hitter, for two reasons. First, Derek Jeter does not like to lose baseball games, and he really doesn’t like losing a few in a row. Second, it was in the perfect spot for Jeter to hit it the other way. He did just that, bringing home the Yanks’ first run of the game and putting the tying run on third with none out. Nick Swisher came up and, like Jeter, took the first three pitches, two of which were strikes. On the 1-2 the new pitcher, Jason Frasor, threw a changeup in the dirt. Swish checked, but the ump didn’t see it that way. He punched him out, which led to the next oddity of the inning.

The punchout drew the ire of Joe Girardi, and rightfully so. The home plate ump had called a terrible game to that point, and I guess that pushed Girardi over the edge. He emerged from the dugout, hatless because he had tossed it in anger, and got himself ejected. No doubt astute observers made the connection to Girardi’s tirade on June 24th of last year, after Brett Gardner got picked off first base. Girardi’s ejection was followed by Francisco Cervelli’s game-tying home run, followed by another mini rally to put the team ahead. What unfolded in the eighth inning yesterday wasn’t all that different.

For some reason, Cito Gaston decided to walk Mark Teixeira to load the bases. Walking Teixeira to get to A-Rod rarely, if ever, makes sense to begin with. But when Teixeira looks as bad as he has in the past few games, it makes zero sense. Funny thing is, if not for a blunder, it might have worked. A-Rod did strike out, but not before the third pitch of the at-bat got away from Jose Molina and allowed Gardner to score the tying run.

More from the theater of the absurd. With first base open yet again, Gaston opted to face Robinson Cano. After the game he said the first instance was in order to put on the double play, but again that sounds like a weak strategy, especially with a hitter slumping as badly as Teixeira is at the moment. Cano, however, is one of the hottest hitters in the league. He reminded everyone of that on the second pitch, a fastball right in the middle of the plate. He lined it to left and brought home Jeter and Teixeira, giving the Yanks a two-run lead.

I’ve written entire recaps shorter than that eighth inning description. That’s how bizarre it was. It took a few lucky breaks and a few blunders, and maybe a fired-up manager inspiring his team if you buy that story line, but the Yankees had taken the lead And no one, not Joba Chamberlain, not anyone could take it away from them.

Plenty of pitchers hold their opponents hitless for the first three frames. Many extend those to four or five. Once a pitcher hits that two-thirds marker is when things start to get exciting. Javy Vazquez was one one out away from that point when he faced Adam Lind for the third time. He’d walked and struck out previously, and in this at-bat it looked like he wasn’t going to swing at crap. He fouled off a 1-0 curveball, but didn’t move the bat from his shoulders for the rest of the appearances. After six pitches he walked to first base.

Still, the no-hitter was in tact when Vazquez faced Vernon Wells. He kept the ball away from him, going slider-curveball for a called strike and a foul. The count 0-2, Javy went back to the slider, but this one hung. Even though it was outside, Wells had enough time to get his arms extended and crush the pitch to left, giving the Blue Jays a 2-0 lead. With the Yanks offense again on the ropes, it must have been a deflating feeling. Vazquez did finish the inning by striking out Jose Bautista.

For Vazquez, the game represented the best-case scenario. As we mentioned before the game, if he brought his command he could slice and dice an offense like the Jays, one that relies on big swings and pulling the crap out of the ball. He used all of his five pitches and prevented the Jays from turning on an inside fastball. His line tells the whole story:

Unfortunately, the one hit was a long fly that came immediately after one of the four walks. Those are the breaks. Vazquez had a plan and executed. With a full-strength Yankee offense he wins that game easily. Instead, the Yanks had to catch that lucky series of breaks in the eighth to hand him the nice, but meaningless, point in the win column.

The biggest pitch of the day for Vazquez was the changeup, which he threw 21 times and on which he generated swinging strikes 10 times. He also had some success with the slider, 16 attempts and 13 strikes, including three whiffs. It’s understandable why he went with that pitch against Wells. It was just a bad time to hang one.

Just think, next time Javy gets to face the Astros, not only the worst offense in the league, but also a National League team, which is obviously Javy’s natural habitat.

If this WPA graph were a water slide, Aaron Hill’s GIDP would make it not so much fun. 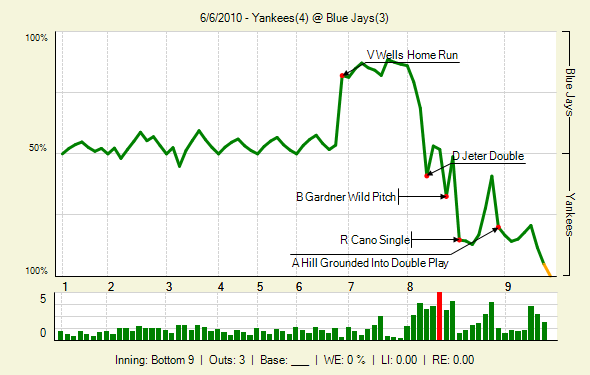 More at FanGraphs and the traditional box at mlb.com.

It’s an off-day but not really, as we have the amateur draft. Mike will be around with the coverage. The Yanks head down to Baltimore on Tuesday, when Phil Hughes goes against Kevin Millwood.