The Phillies came into this series having lost 14 of their last 20 games, getting outscored 98-48 in the process. They had two largely mediocre starters lined up to pitch after the great Roy Halladay, so everything looking to be in line for to the Yankees to take the series. Of course, everything went backwards. The Yanks pounded Halladay, got shut down by Jamie Moyer, and then got shut down by Kyle Kendrick. Something about not being able to predict baseball applies here.

Andy Pettitte was on his game early on Thursday night, cruising through the first three innings without incident. The Phils managed to scratch a run across with a little help from a Ramiro Pena error (more on that later) in the 4th, but Andy wiggled out of the inning with just a one run deficit. Hardly insurmountable.

Philadelphia tacked on two more runs in the next inning on a Shane Victorino homer, which WPA says was the biggest hit of the game. It wasn’t a terrible pitch, an 86 mph cutter in the on the hands that Victorino just hooked into the seats, but the real mistake was walking eighth place hitter Carlos Ruiz on four pitches two batters earlier. Ruiz is a fine offensive catcher with a .401 OBP, but you’ve got to challenge him that early in the game. A four pitch walk to that guy is less than ideal, and it came back to bite Pettitte.

Biggest Out: Polanco Lays Out

Even though the final score was lopsided, the Yanks had some chances to get right back in this one, none bigger than the 6th inning. Down by three, Mark Teixeira drew a seven pitch walk in front of an Alex Rodriguez single, then Robbie Cano plated what turned out to be the team’s only run on a single through the 3.5 hole. That brought Nick Swisher to the plate with men on the corners, so a solid base hit and we would have had ourselves a ball game.

Kendrick’s first pitch was a cutter down and out of the zone, but the second one hung about as bad as a fastball can hang. Is was his pitch, but Swish just missed and fouled it back. Kendrick’s next offering was a 90 mph sinker that he again left out over the plate, but Swisher fouled it off behind third base. Third baseman Placido Polanco ran after the ball, though it looked like the tarp and a row or two of seats would get in his way. Instead, he basically swan dove on top of the tarp, snatching the ball away from the unsuspecting tourists in the front row. I assume they were tourists because any actual fan would have gotten in Polanco’s way. Definitely a weak effort by the silver spooners up front.

The Bullpen Lets It Get Away

The Yanks had themselves a chance in this one until late, when the bullpen came in and let things get out of hand in the top of the 9th. Joba Chamberlain started the inning by allowing a double to Ruiz, a run scoring single to Wilson Valdez (more on that later), and a walk to Victorino. He faced three batters, threw nine pitches, and recorded zero outs.

Joba was relieved by Damaso Marte, who walked Chase Utley to load the bases following a seven pitch battle that included a pitch to the backstop. Polanco again worked the count deep, forcing Marte to throw ten pitches before driving in the Phillies’ second run of the inning on a sac fly to center. Ryan Howard drove in another run with a sac fly, then Jayson Werth drew an eight pitch walk to put men on the corners for the below replacement level Raul Ibanez.

With the deficit up to four and his top lefty reliever having thrown 29 pitches, Joe Girardi brought in Chan Ho Park to clean up the mess. Ibanez doubled to left to drive in two more runs, and it wasn’t until a batted ball hit Ibanez going from second to third that the final out of the frame was recorded. A salvageable game turned into a laugher just like that.

Pena missing that grounder in the 4th. The first thing they teach you in Little League is to get the glove down; you can’t let a ball get under the glove, no matter how weird the bounce.  When you’re hitting just .186-.234-.203, you’ve got to catch everything man.

The wheel play? What is this, 1968? When does that ever work? There’s no reason to get cute with the defense when the batter is WILSON VALDEZ. No only once, but twice they pulled that nonsense! My only hope is that because they got burned on it in the 9th, they’ll shy away from trying it again in the future.

Great call on Valdez’s stolen base in the 9th, Lance Barksdale. Replay showed he was out, but nah. Is Lance Barksdale even a real name? That sounds made up.

This is just the third time the Yankees have been held to one run or less at the New Stadium. They were shutout by the Nationals in the rain last June, then got Cliff Lee’d in Game One of the World Series. Three out of 121 ain’t bad. (h/t Ed Price)

A Little Bit Of Good

There were two semi-historic moments in this one that are worth mentioning. Pettitte passed Ron Guidry for sole possession of second place on the franchise’s all-time strikeout list, and Cano became the first Yankee since Lou Gehrig in 1936 to pick up 97 hits in the team’s first 66 games. Congrats to both.

Grumble grumble. FanGraphs has the WPA breakdowns and more, MLB.com the box score. 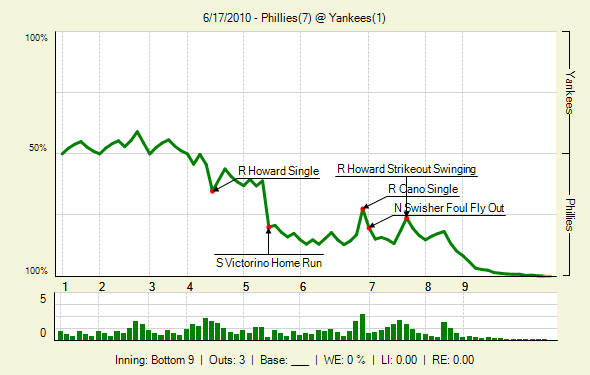 The Yankees lost two of three to the Phillies in the Bronx last July and lived to tell about it, so this isn’t exactly the end of the world. The Rays lost, so the two teams are tied atop the AL East. The Yanks will look to right the ship against the Mets tomorrow, when they come to town to kick off the second leg of the Subway Series. All three games will feature pitching rematches, so tomorrow it’s Javy Vazquez vs. Hisanori Takahashi.

Heathcott keeps on hitting, but Charleston falls
Amidst some uninspired games, a tie for first place