River Ave. Blues » Outfield at the Stadium in poor shape
Riding out the first half
Game 78: Salvaging a lost series

On June 3, as fans filed out of Yankee Stadium following a 6-3 win over the Baltimore Orioles, the preparations began. While the Yankees would spend the next week on the road, the Stadium would not cease activity. Instead, it would host its first boxing match in 34 years. The event went off without a hitch, it appeared, and they got the Stadium back in order for the Yankees’ return on Friday the 11th. Yet not everything was right.

The first thing I noticed after taking my seat in the bleachers that night was the condition of the outfield. You could see the outline of a stage, which did not come as a surprise. But that wasn’t the worst part. Instead, it looked like half the outfield had been overrun by a football team running drills for the past seven days, from morn till night. My friend commented that the grass looked brown, unwatered. It wasn’t that, though. It was that in many places there was almost no grass at all. The outfield was a shambles. 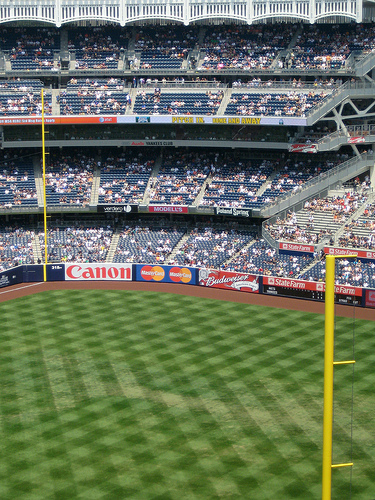 Photo from Flickr user baseballoggie, who also writes about the games he attends on his blog.

The Yankees played nine games in 10 days there before hitting the road again. They spent eight days on the West Coast, but that wasn’t enough time to get the field back in shape. That was the first thing I looked for when I got to my seat on Tuesday, and I was disappointed to see that it actually looked worse. That was just aesthetics, though. They patched up some parts, but clearly not all. Some parts are light green, others a darker forest green, and others are an even darker mix of green and brown.

In his notes column in the NY Post today, Brian Costello relays Curtis Granderson’s take on the matter.

“It’s not necessarily better,” center fielder Curtis Granderson said. “They put some new grass out there, but it’s not everywhere. It looks like there’s a lot of seed stuff maybe. There’s a lot of green stuff out there. I don’t know what it is. Before it looked like paint. [Brett Gardner] slipped and his uniform turned bright green. I’m not sure what’s out there.”

The grounds crew will have to do their best to maintain the field as the Yankees play the next four games, but after that they’ll have 11 days to get the outfield into better shape before the team returns on July 16 to play Tampa Bay. While it sounds like they could get the job done in 11 days, they had eight days last time and didn’t accomplish much.

I’m not sure that they’re going to get much accomplished before the off-season, and even then it’s going to be a pain. Jay-Z and Eminem come to the Stadium on September 13th and 14th, so that’s going to take a further toll on the outfield grass. Just in time for the postseason, too. After that maintaining the lawn will be difficult not only because of the winter conditions, but because of the Pinstripe Bowl on December 30.

It’s nice that they’re getting more use out of the New Stadium than the old park, but this is first and foremost a baseball stadium. Are we going to have to look at a half-dirt, half-grass outfield every year?

Riding out the first half
Game 78: Salvaging a lost series