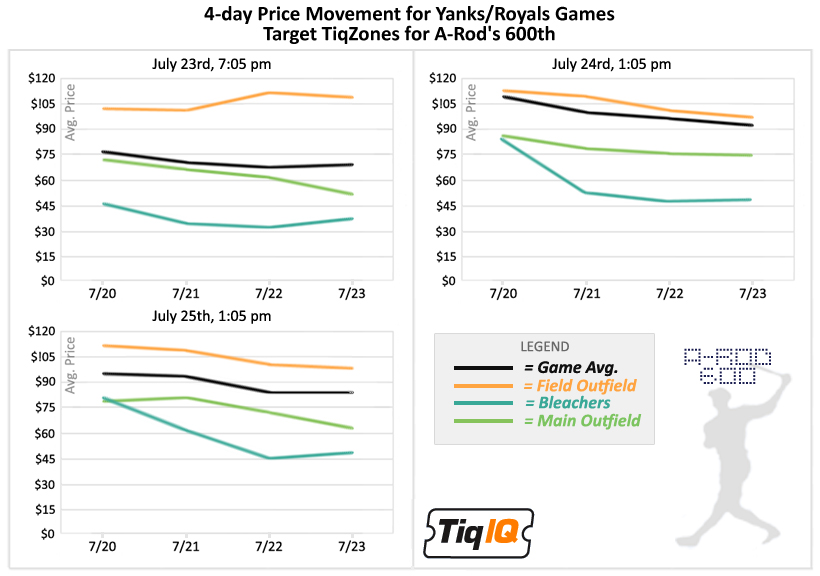 Via our partners at TiqIQ comes a chart showcasing the downward trend in weekend ticket prices. Even as A-Rod sits on the precipice of his historic 600th home run, ticket prices haven’t, by and large, increased this weekend. In fact, they seem to be trending downward.

The obvious question is why? Shouldn’t prices move up as history nears? One factor pushing prices down could be general A-Rod malaise. At the Pinstriped Bible, Steven Goldman posits that the cheapening of the home run milestones combined with the inevitability of A-Rod’s reaching the mark and general coolness toward him have combined to lend the act an air of something less historical than it otherwise would have. Sometimes, the media drives this narrative, but even without A-Rod’s PED revelations, 600 is just another number.

On the other hand, A-Rod is the youngest player in baseball history to reach 600, and as last night’s crowd reaction to his eighth inning double showed, the fans want to see him launch this home run. I blame the Royals and the weather. First, the Royals are an uninspired opponent. They’re 41-54 with few inspiring players and no gate attractions. These prices aren’t too out of line with any other weekend summer game, and the Royals don’t draw fans to the game. With rain in the forecast tonight and a heat advisory bringing another 95-degree day tomorrow, the ballpark is a less appealing place to roast away under the sun.

For those looking to get in on the A-Rod action, TiqIQ has seats in prime zones. You’ve got Field Level outfield seats for tonight under $60, Saturday bleacher seats for under $20 and Main Outfield seats less than $45.