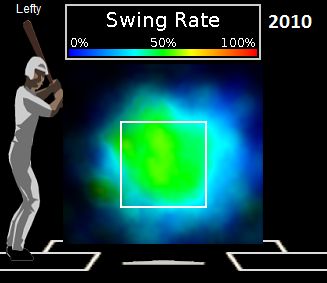 That up there comes from Baseball Analytics, and shows how often Brett Gardner swung at a pitch by location. It was no better than 50-50 that he would swing at a pitch right down the middle last year, but it was basically a one-in-five chance that he’d swing at something on the corners or at the knees. They also have graphs for 2008 and 2009, which allows you to see his plate discipline progression. Here’s a gif of the three, maybe that’s easier to compare. It’s pretty obvious that he’s gotten better and better at laying off stuff out of the zone, always a plus, but Gardner can be pretty infuriating when he lets a something hittable go by in a hitter’s count.