It’s been a long time since the Yankees traded Gary Sheffield to the Tigers for three pitching prospects, so long in fact that Sheff added 299 hits and 54 homers to his resume after the trade despite (essentially) retiring two seasons ago. New York simply had too many high-priced outfielders and not enough spots, with both Johnny Damon and Hideki Matsui just completing year one of identical four-year, $52M contracts while Bobby Abreu (plus the two years and $31M left on his contract, counting the option) came on board in a midseason trade. Sheff was the odd man out.

In return, the Yankees acquired three promising young arms. The best of the bunch was Humberto Sanchez, who was rated as the 57th best prospect in the game by Baseball America just weeks after the trade. A few weeks after that, he blew out his elbow and had Tommy John surgery. He came back the next year and managed to earn a September call-up, leading to his only two big league appearances. The Yankees released Hungry Hungry Humberto after the 2009 season, and he’s since bounced to the Taiwanese and Mexican Leagues. The least interesting piece in the trade was Anthony Claggett, who sat in the minors until making two disastrous appearances for the Yankees in 2009. He was lost on waivers that September and hasn’t been back to the majors since.

The third player in the trade wasn’t a headliner like Sanchez or a throw-in like Claggett, just a solid secondary piece in the form of a decent relief pitching prospect. That man is Kevin Whelan, the only player in the trade yet to reach the big leagues and the only player in the trade still with the Yankees. A catcher that Texas A&M turned into a pitcher, Whelan was a classic hard-thrower with command issues. He struck out 110 batters in 78.1 IP in Detroit’s farm system before the trade, allowing just 39 hits. The problem was the 37 walks and seven wild pitches. Whelan lived up to the billing in his first year in the Yankees’ organization, striking out 96 batters and walking 54 in 82.1 IP (45 hits). He’s battled various injuries and the same control issues in the four full years since the trade, essentially removing him from the prospect map and relegating him to the organization arm bin. 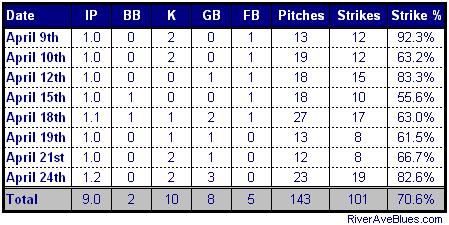 Scheduled to become a minor league free agent after the season, Whelan is doing his best to raise his stock. The table on the right shows his game log from this season, and you can see that he’s done a swell job of throwing strikes and avoiding the free pass so far. The lone run he’s surrendered came on a solo homer in his first game of the season. It’s not just those eight appearances either, Whelan’s last two months in 2010 were excellent as well (19 IP, 9 H, 3 R, 3 ER, 4 BB, 26 K). It’s not much, but it’s the 27-year-old’s best stretch of health and effectiveness since the trade. I don’t have a recent scouting report for Whelan, so for all I know he could be doing it with smoke and mirrors, but he worked off a low-to-mid-90’s fastball with a devastating splitter (the pitch responsible for all those whiffs and the lack of hits) in the past. Until I hear otherwise, I’m just going to assume the same (or something reasonably close to it) holds true today.

The Yankees, as you’ve probably already noticed, have a spare bullpen spot to play with. It’s currently occupied by Buddy Carlyle, but it’s also been filled by Hector Noesi and Luis Ayala in the past few weeks. I’m not saying the Yankees should cut ties with Carlyle now and call up Whelan, but I would have to think he’s at least in the conversation for a call-up if/when another one is needed. Like I said, he’s going to become a free agent after the season, so the club should at least take a look at him at the big league level and see what he has to offer, even if he just ends up as the third piece in a trade. It’s better than losing him for nothing.

The Yankees have set a precedent when it comes to Triple-A relief arms having excellent seasons, often leaving them in the minors instead of promoting them to the show and giving them a chance. And you know what? They’ve been right about these guys. Chris Britton has spent the last two years pitching in an independent league. Jon Albaladejo reinvented himself last year and still garnered so little interest from MLB teams last year that he bolted for Japan this winter. Colter Bean, Sam Marsonek, the list goes on and on. For all we know Whelan could be the next in that dubious line, but if he has anything to give at the big league level, the Yankees should see what it is at some point this summer. They just might end up with something to show for the Sheff trade after all.