It has been a long and difficult season for Jorge Posada. The Yankee stalwart started the year as the regular DH, then got demoted in the lineup, then became a platoon DH, and by the end the of the season he had lost the job entirely. With the bases loaded and two outs in the bottom of the eighth inning, Jorge delivered his biggest hit of the season and was all smiles.

The inning started ominously enough, with Eduardo Nunez striking out against Jake McGee after Jeremy Hellickson held the Yankees to just two runs and two hits through seven innings. Nick Swisher pinch-hit for Chris Dickerson, and started the game-winning rally with a double into left-center. Greg Golson flew out of the dugout to pinch-run, but the chances of scoring went down when Curtis Granderson flew out to right. Joe Maddon started  mixing and matching, bringing in Juan Cruz only to watch him walk Mark Teixeira on four pitches. None were particularly close, either.

Maddon went to the bullpen again, this time to bring the lefty Cesar Ramos to face Robinson Cano, who already beat him in the first game of the doubleheader. Ramos fell behind in the count 3-1, and the fourth ball to load the bases was intentional. With the righty swinging Jesus Montero due up, Maddon again went to the bullpen, this time for the right-hander Brandon Gomes. Joe Girardi countered with Posada, who took a  first pitch splitter for strike one before jumping all over a fastball. The line drive dropped into right, a legit base hit, scoring Golson and Teixeira to turn a 2-2 tie into a 4-2 lead. At .289 WPA, Jorge’s hit was easily the biggest play of the game. Sentimentally, it was arguably the biggest of the season.

Honestly, Who Really Cares About 20 Wins?

In what is likely his last normal start of the season, CC Sabathia gave the Yankees 127 pitches (second most of the season), but they couldn’t give him a win. He allowed just two solo homers (to Kelly Shoppach and Sean Rodriguez) over 7.2 IP, but Girardi really pushed it in an effort to get his ace that milestone. I don’t like it because getting Sabathia ready for the ALDS is far more important than an individual achievement, and CC would be the first to tell you that. What’s done is done though.

Sabathia allowed seven hits and two walks in those 7.2 IP, and David Robertson bailed him out of a bases loaded jam with a one-pitch  double play ball. CC didn’t get his 20th win, but who really cares? It’s a nice round number, that’s it. Remember, we’re trying to win a ring around here.

The first two Yankees runs came on a solo homer (Cano) and a double play (Montero). Cano had been intentionally walked to loaded the bases with no outs to get to Montero, and I guess it worked since only the one run scored. The Yankees only had four hits, a Granderson double in addition to the previously mentioned Cano/Posada/Swisher knocks. The six walks really helped.

With Mariano Rivera unavailable after pitching in the first game of the doubleheader, closer duties fell on the shoulders of former Ray Rafael Soriano. Robertson had warmed up in the first game and twice in the second game, so I guess that’s why he couldn’t continue after throwing that one pitch in the eighth. Soriano did allow a hit, but he struck out Matt Joyce to end the game and the AL East race.

Like I said earlier, the Yankees have clinched the AL East thanks to their two wins and the Red Sox’s loss to the Orioles. Big ups to Buck Showalter and crew, they showed up for that series. Many thanks. The only thing left on the regular season checklist is homefield advantage, and magic number for that is just three. Still some work to be done, but expect to see a Triple-A lineup tomorrow.

MLB.com has the box score and video highlights, FanGraphs the nerdy score, and ESPN the updated standings. 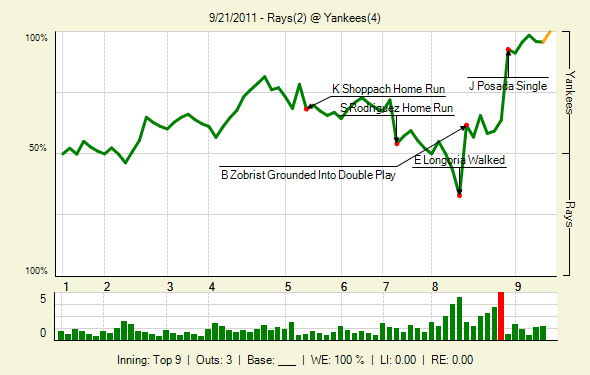 One more game with the Rays, and it’ll be played Thursday night. Bartolo Colon gets the ball against Matt Moore. Jeff Niemann has been scratched due to some soreness/stiffness. If you want to catch the fourth to last regular season home of the regular season, RAB Tickets can help get you there.