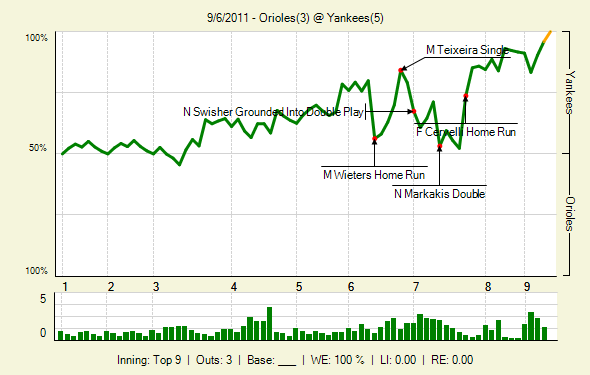 Four hours later, the Yankees and Orioles finally played. The first pitch was thrown until 11:08pm ET on Tuesday night, the final pitch at 2:16am on Wednesday morning, and in between there was a whole lotta grounds crew shenanigans. Drying agent, puddles on the warning track, more drying agent, outfielders slipping, all of that and more. The whole game was a complete mess. Let’s quickly recap…

If you were supposed to go to the game, or even if you did go and stuck around all night, you’ll get a free ticket to a non-premium game next season. So hooray for that, I’m sure it’ll make up for the pneumonia. Anyway, these two teams are supposed to play again at 1pm ET on Wednesday, but there’s little chance of that happening since it’s going to keep raining. Expect another long delay. Whenever they start that one, it’ll be A.J. Burnett and Zach Britton on the bump.