At any other point of the season, this would have been a really tough loss to swallow. Instead, it was no big deal because the Yankees are playing for nothing right now, except for not getting hurt. I do know one thing, Wednesday is going to be frickin’ awesome.

The Yankees were playing spoiler for the first six and a half innings, recovering from an early 2-0 hole to take a 3-2 lead into the bottom of the seventh. Joe Girardi said before the game that his top three relievers were going to pitch in this game no matter what, their final tune-up before the playoffs begin on Friday. That meant former Ray Rafael Soriano in the seventh.

Like many other multi-run innings, this one started with a walk. Bossman Jr. took four wide ones, then stole second base to put the tying run in scoring position with no outs and the heart of the order up. Soriano was feeling generous, so he walked Evan Longoria too, putting two on with no outs. After throwing another ball to Matt Joyce, the seventh inning guy essentially saved Tampa’s season by catching way too much of the plate with a  pitch. Joyce hit it into orbit, it was obvious th e ball was  gone off the bat from where I was sitting, and the Trop went nuts when the one-run deficit turned into a two-run lead on one swing. It was actually a pretty awesome moment, the moment Matt Joyce became a True Ray™.

TrueRays™ are a thing, right? Or is that only reserved for the Yankees?

A High And A Low For Martin

What’s the best thing a player can do in an at-bat? Hit a homer. Russell Martin took care of that with a solo shot in the third inning, his first homer since that three grand slam game against Oakland on August 25th. It was also his 18th of the season, one behind the career high he set in 2007, when he came to plate 620 times. He has just 476 PA in 2011.

Now what’s the worst thing a player can do in an at-bat? Hit into a triple play. That’s exactly what Martin did his next time up, clanking into an around the horn 5-4-3 triple play with the bases loaded and (obviously) no one out. It was a rather aesthetically pleasing play, the Rays really did a nice job turning it. Of course,  Martin helped them out by stupidly sliding head first into first, slowing himself down. What’s the matter, a triple play wasn’t bad enough so you had to risk some broken fingers on the next to last day of the season? Playing smart > playing hard.

The End Of The  Line

Bartolo Colon’s season came to an end in this game, long after we all figured he be released or hurt. He gave up just two runs in 5.1 IP, ending his season with exactly a 4.00 ERA in 164.1 IP. The three strikeouts put his season strikeout rate at 7.4 K/9, and the two walks putting his walk rate at 2.2 BB/9. Bart’s 3.34 K/BB ratio is the tenth best in the AL, which is amazing. The only way I see him making the playoff  roster is if there’s an injury, but damn yo, give this man some props. Colon’s been a godsend this season.

Soriano easily retired the next three batters he faced after the homer, so I assume the two baserunners and three-run dinger were intentional. That will make me feel better before Friday. David Robertson got two outs and his 100th  strikeout of the  season, then Mariano Rivera struck out the only runner he faced. This could be wrong, but someone here said that was the first time Rivera has entered a game with the Yankees losing in the eighth inning since Game  Six of the 2003 World Series. That’s unconfirmed, but it doesn’t seem unreasonable.

Aside from Martin’s homer, the Yankees scored another run when Curtis Granderson grounded into a double play with men on the corners fifth, and again when Nick Swisher doubled with two on in the sixth. How Mark Teixiera didn’t score from second on a double, I’ll never know. I guess he thought it  had a chance to be caught, but that seems unlikely. It was a shot, I thought it had a chance to get out. The Yankees drew five walks (two by Alex Rodriguez) and struck out only four times (two by A-Rod), but one of the walks  was intentional to Jorge Posada immediately before Martin’s GITP. As soon as they turned it, you just knew they’d win. The narrative would not be denied.

There was very little to talk about after the game, hence the lack of postgame notes. Joe Girardi said Wednesday’s starter was still to be determined, but it won’t be a regular. Expect an inning or two of Phil Hughes and a little Boone Logan among various Triple-A arms. Otherwise, a  few Yankees  (Derek Jeter, Robinson Cano, Posada, Robertson … a few others as well) hung around to watch the end of the Red Sox game. Oh yeah, the Sox won, so Tampa and Boston remain tied for the wildcard heading into the final game of the season. That’s why Wednesday will be awesome.

The Tigers won and the Rangers are winning at the moment (follow that game here), so the Yankees are still on track to face Detroit in the ALDS. Assuming the Texas score doesn’t change, the only way the Yankees would play the Rangers in the ALDS is if the Rangers lose and the Tigers win on Wednesday. Anything else means Yanks-Tigers.

MLB.com has the box score and video highlights, FanGraphs the other stats, and ESPN the updated standings. 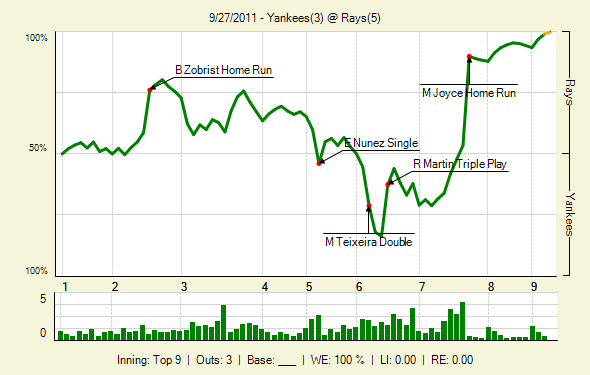 Hard to believe it, but there’s just one regular season game left in the 2011 season. The Yankees and Rays will wrap the year up on Wednesday night,  when David Price starts the biggest game of his life against Johnny Wholestaff.