Back on August 16 I took a look at how the Yankees were faring against the five major pitch types captured by FanGraphs compared to the previous four seasons, and with the season over I wanted to follow up to see how the team finished the year out. Of course, there are a couple of caveats: I’ll be the first to admit that given the already wide gulf between the BIS data collection that FanGraphs uses and the PITCHf/x data that powers Brooks, TexasLeaguers.com and JoeLefkowitz.com — not to mention the fact that the latter three sites have their own classification issues — these numbers are not a 100% perfect representation of what occurred.

Another issue I have with FanGraphs’ BIS data is that four-seamers and two-seamers are all binned under one catch-all “Fastball” category, which seems inherently result-skewing given a two-seamer/sinker’s increased likelihood of generating a ground ball over a four-seamer. You also end up with things like Ian Kennedy — no one’s idea of a particularly overpowering fastball-thrower (avg. vel. 90.3 mph) — leading all of MLB with a 28.7 wFB, due in part to the fact that he threw more two-seamers (36.7%) than four-seamers (29.8%), while Justin Verlander — who probably has the best four-seamer in the game — ended up coming in 3rd, at 25.5 runs above average.

So now that I’ve spent 200 words telling you why you should be wary of the numbers, let’s dive right in, shall we? Until someone comes along with a more reliable freely available system that tallies how teams/players fared against specific pitches, these should at least represent a close approximation of accurate pitch type linear weight results. 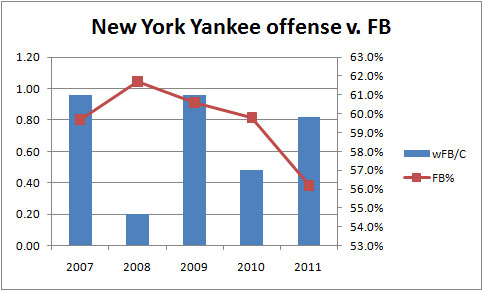 The 2011 Yankees creamolished fastballs, but you already knew that. Interestingly they only saw a fastball ~56% of the time, which is a five-year low. At the time of the August 16 post they led all of MLB in wFB/C, but in September the team posted their second-worst monthly wOBA out of the last 66 months dating back to the beginning of the 2001 season, enabling the Rangers and Red Sox to slug past them. The Yankees who performed best against the fastball were Jesus Montero, Andruw Jones and Curtis Granderson. The only member of the everyday lineup with negative run values against the fastball was Jorge Posada. 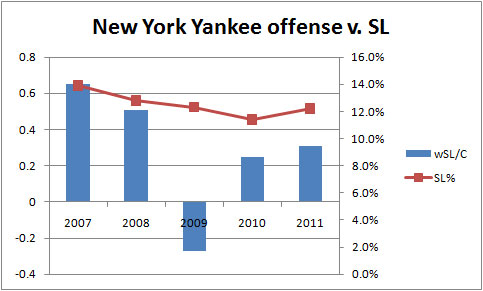 The team hit sliders well for a second-straight year, and this shouldn’t be a surprise, as they generally seemed to fare pretty well against the heavy fastball-slider types (think Alexi Ogando, Juan Nicasio, Felipe Paulino, etc.) they faced during the season. Robinson Cano, Mark Teixeira, and Derek Jeter had the three highest run values against the slider in 2011. Of the lineup regulars, Nick Swisher was the least successful against the slider. 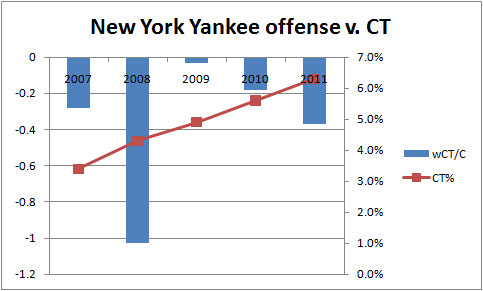 This may be the most surprising chart. The Yankees haven’t posted positive run values against the cutter during any of the last five seasons, and are on a three-year decline against the cut fastball. Unsurprisingly, opponents’ deployment of the cutter is on a five-year increase. I’d imagine that both the decreased effectiveness against and uptick in cutters seen is at least due in part to the fact that the Yankees have to see Jon Lester — who threw the 7th-most cutters in MLB last season and had the 7th-best wCT/C — and Josh Beckett — 16th-most cutters in MLB; 9th-best wCT/C — approximately 8,000 times a season. Also high on the cutters-thrown list are Dan Haren (1st), Gavin Floyd (5th), Josh Tomlin (6th) and John Danks (9th). Despite this cutter issue, Robinson Cano annihilated the pitch, while Posada and Jeter also fared well. As we saw on Wednesday, the cutter has not been kind to Alex Rodriguez of late, and in fact he got positively destroyed by the cutter in 2011, coming in at -3.03 wCT/C — a mark that would have been 7th-worst in baseball had he had enough plate appearances to qualify. 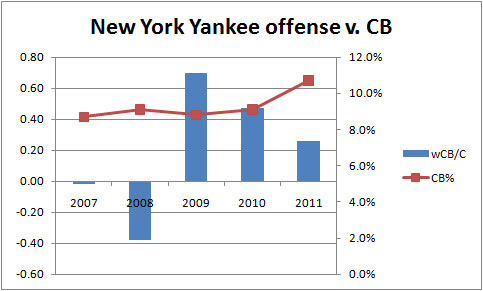 On August 16th the Yankees’ wCB/C was -0.30, but they managed to finish the year at 0.26, representing their biggest improvement of the five pitch types in this post. They also saw a five-year high in curve% this season. Jeter, Nunez and Russell Martin fared best against the curve. Of everyday players, it probably won’t surprise you to learn that Tex (-0.35 wCB/C) was the least effective member of the lineup against the hook. 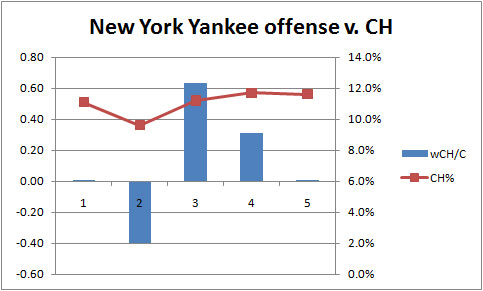 If you were to poll a swath of Yankee fans and ask “which pitch do the Yankees have the hardest time with?” I’d imagine the changeup would be the most popular answer. Though they posted positive run values against the change in 2009 and 2010, anecdotally it feels like we see them flail away at changeups to no avail quite frequently. That said, my view may be somewhat distorted due to the fact that two of the game’s very-best changeup-throwers — Felix Hernandez and James Shields — have owned the Yankees seemingly forever. Though they did shockingly get to Felix for the first time in eons this September, he and Shields have been the Yankees’ greatest foils these last few seasons. Going back to the beginning of the 2008 season, Felix and Big Game James have the top two lowest ERAs (2.82 and 2.91, respectively) against the Yankees among pitchers who have made a minimum of eight starts against the Bombers. That’s insane. Even crazier is that Shields’ mark is across 15 starts to Felix’s eight. Additionally, Shields pitched to a 2.33 ERA over 38 2/3 innings against the Yankees in 2011, the third-lowest ERA among starters that made at least three starts against the team this year.

Gardner, Cano and Granderson were the team’s most effective everyday players against the change, while Russell Martin, Jorge Posada and Derek Jeter got destroyed by it. Alex Rodriguez also posted negative run values, so basically if you’re a right-handed pitcher with a great changeup, you’ve got three auto-outs when facing the Yankees. Hopefully Kevin Long can do some work with the Yankees’ right-handed bats to help them combat their offspeed difficulties.