During the past year, one of the most frustrating aspects of conducting advanced baseball analysis has been the widening gulf between the reliability of the pitching data supplied by Baseball Info Solutions (and which FanGraphs uses) and Sportvision’s PITCHf/x, the latter of which is near-universally acknowledged as the superior data set (though that’s certainly not to say PITCHf/x is without its own flaws). To the delight of baseball nerds like me, FanGraphs recently went a long way toward rectifying this situation, adding PITCHf/x data not only to the individual player pages, but even more importantly, to the sortable leaderboards, enabling us to make comparisons that were previously impossible unless one wanted to input every individual name into TexasLeaguers.com manually and compile the data themselves in as painstaking a manner as possible.

In honor of the newfound ability to see where our favorite pitchers ranked in relation to their peers, I’ve taken a first pass through last year’s data to see where the members of the Yankees’ starting staff ranked among the 42 qualified AL starters across several categories. Neither Freddy Garcia nor Phil Hughes made the innings cut, which is why they’re not present. I also didn’t evaluate horizontal movement (pfx_x) or vertical movement (pfx_z), as you can’t really rank H-break and V-break in descending/ascending order (though you can try), at least not without first binning by pitching arm, which FanGraphs does not have the ability to do. 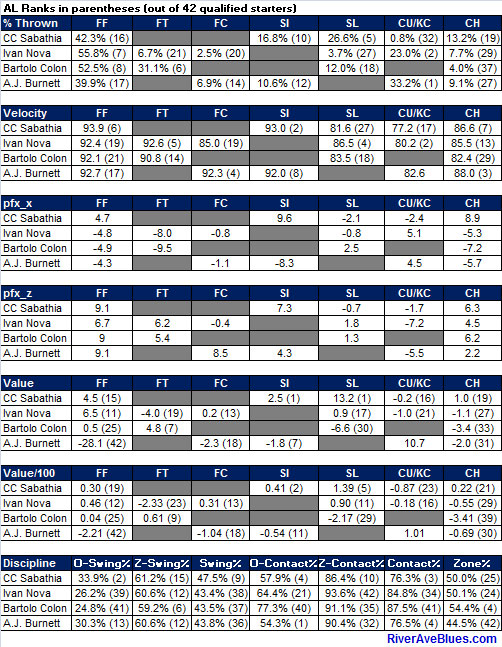 It may surprise you to learn that Ivan Nova threw the 7th-most four-seamers in the American League last season, although despite the fact that it’s frequently been derided as a lesser pitch for Nova, he also wound up having the most relative success with it on the Yankee pitching staff, with a 0.46 FF/C, good for 12th-best in the league. It will not surprise you that A.J. Burnett had by far the worst four-seamer in the league, at -2.21 per 100 thrown.

Here’s another interesting Nova nugget: despite the fact that PITCHf/x only has him having thrown a slider 3.7% of the time — a percentage that appears to be incorrect — he had tremendous success with it (which is, of course, something we already knew), putting up a 0.90 wSL/C, good for 11th-best in the AL and second on the team after CC Sabathia. As I and many other shave noted throughout this offseason, Nova’s slider will likely be the deciding factor behind whether he can continue to pitch as effectively as he did in 2011.