One of Larry’s objections to the Pineda/Montero swap is the future availability of Cole Hamels on the free agent market. If the Yankees can pick up Hamels to slide in behind Sabathia, the argument goes, then perhaps they should have kept Montero to provide cheap production out of the designated hitter slot over the next few seasons. I wrote about Hamels last week, speculating that the Yankees might be preparing to make a run at him next winter.

Last Friday’s trade radically altered the landscape of the Yankees roster. In acquiring Michael Pineda from the Mariners, the Yankees acquired a potential number one or two starter with five years of cheap team control. According to well-sourced reporter Joel Sherman, the price was particularly important because the team is serious about getting under the $189M luxury tax threshold in 2014. With the new roster in place, it seems reasonable to wonder whether the team will be able to afford Hamels, or their own Curtis Granderson, Robinson Cano, and/or Nick Swisher, all of whom hit free agency in the next few years.

In projecting precisely whom the Yankees will be able to afford, it helps to have a handle on a reasonable estimate of future prices. Towards that end, I asked  Joe, Mike, Ben, Moshe and Larry to all provide me their best estimates for what they expect Swisher, Granderson, Cano and Hamels to pull in in their new contracts. These were the results of our inputs:

I’ll be using these figures going forward, and also making a few assumptions about the future Yankees payroll. The first one is that the Yankees won’t allow Robinson Cano to leave via free agency. He’s a homegrown star at a difficult position to fill, and he’ll only be 31 when he hits the free agent market after the 2013 season. It’ll hurt, but I expect the Yankees to resign Cano at $22M per year, the average listed above. The second assumption is that Alex Rodriguez will hit his 660th home run this season, and will hit his 714th home run in 2014, thus triggering his second $6M bonus. The third assumption is that Russell Martin does not sign an extension with the Yankees, and that they’ll use Austin Romine by 2014. With this in mind, this is what the roster would look like heading into the 2012-2013 offseasons: 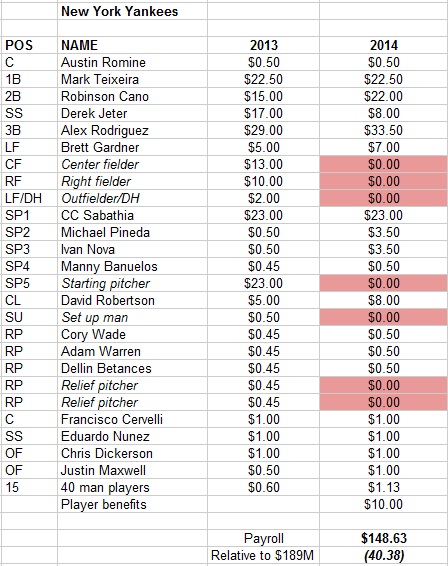 The specific names attached to the $500k salaries aren’t all that important, but the idea that a cheap player will occupy the fifth starter’s spot and most of the bullpen. Banuelos, Betances, and Warren are interchangeable with whatever young player your heart desires. The cost is important.

The Yankees will have roughly $40M to spend on their rotation, bullpen, center field, right field and designated hitter positions. If they pay Granderson $17M and Swisher $12M, they’ll have around $10M to fill out the final rotation spot and the bullpen. They could go with a cheap arm in the fifth starter position, fill out the back end of the bullpen with minimum salary guys, and sign a decent set up reliever. If they choose to let Granderson walk and sign Hamels and Swisher, they’d have about $7M left over for the center field position (or left field, if they shift Gardner to center), bullpen and DH. This would be difficult to pull off. If they chose to forgo both Granderson and Swisher and sign Hamels, then they’d have around $18M left for two outfielders, the DH and the bullpen.

There doesn’t seem to be any way that the Yankees can get under $189M with Robinson Cano, Curtis Granderson and Cole Hamels all under contract at market rates.  From a financial perspective, the “easiest” solution would be for the Yankees to acquire a cheap, cost-controlled outfielder (like a Domonic Brown) who could step in and fill Swisher’s role for cheap. This would allow the Yankees to move Gardner to center and allow Granderson to walk, replacing Gardner with a relatively cheap left fielder and spending big on Hamels and the bullpen.

Personally, I’d very much like for them to spend on Hamels, probably even at the expense of Curtis Granderson. The offense would take a bit of a hit, but the idea of a Sabathia-Hamels-Pineda-Nova rotation is enticing. That’s just me, though, so I’m providing the link to my Google Doc with all the relevant numbers. If you save your own version, you can edit and mess around with various roster scenarios and post your version in the comments. Any way you cut it, though, there are some very hard decisions ahead for the Yankees front office.