Inspired by the advance copy I received of former Yankee PR director Marty Appel’s outstanding “Pinstripe Empire” — which, as far as I can tell, is the definitive and authoritative history of The New York Yankees franchise, and an absolute must-read for die-hards and casual fans alike — I was inspired to do some no-hitter research. 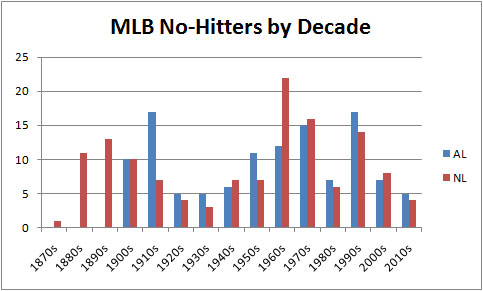 By my count, there have been 117 no-hitters in the AL (including postseason play), per MLB.com, and 133 in the senior circuit, though of course the NL also has more than a quarter-century of additional history over the junior circuit. Of those 117 AL no-nos, only 12 have been perfect games, and three of those 12 have been authored by Yankees. The National League, believe it or not, has only recorded eight perfect games in its 125-plus year history.

I was also curious to see how many seasons it had been since each team in baseball had been no-hit: 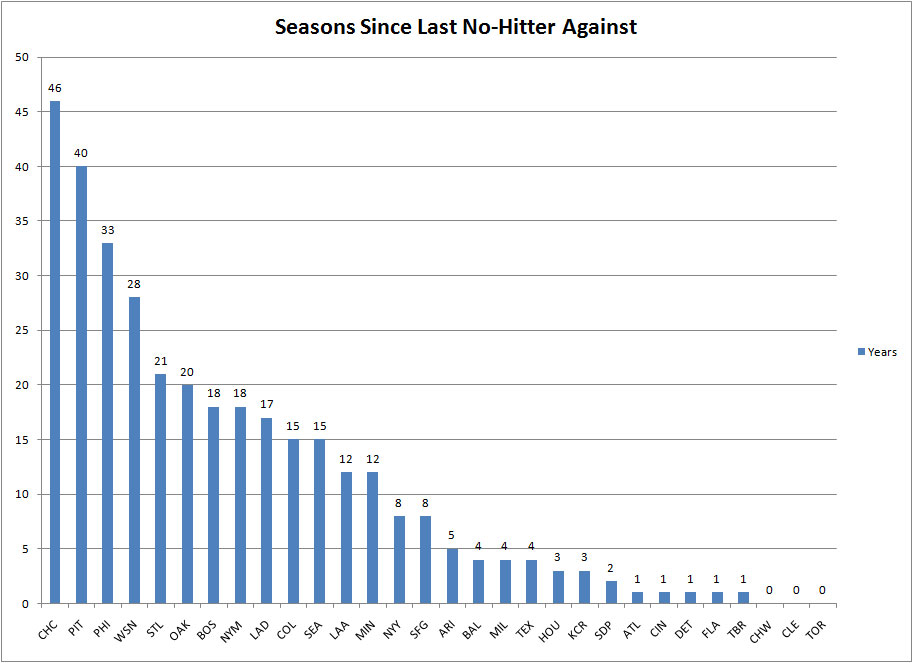 In pulling together this research I was actually pretty surprised at how many teams in baseball haven’t been no-hit in more than a decade. The Cubs are the current MLB leader, going on 46 seasons of not being no-hit. Oddly, the Pirates are right behind them, having not been no-hit in 40 seasons. The AL team with the longest no no-hit streak is Oakland, at 20 years. The Red Sox are right behind them, with their last no-hitter-against coming all the way back on April 22, 1993, against Chris Bosio. Even the Mets, for all of their laughable hijinks, have been able to avoid being no-hit since 1993. Of course, on the flip side, the Mets remain one of two MLB franchises (the other being the Padres) to never have had a pitcher author a no-no. For a list of all-time franchise no-hitters for and against, make sure to check out nonohitters.com.

The Yankees have thrown 11 no-hitters (including the three perfect games) in franchise history, with 10 coming during the regular season. The franchise’s first-ever no-no was thrown by George Mogridge on April 24, 1917, against the Red Sox (being 1917 this game is not captured by B-Ref’s Play Index). Here are the remaining 9 regular season no-hitters in Yankee history:

Interestingly, nearly half of the team’s no-hitters came during the 1990s. Since their last no-hitter on July 18, 1999, there have been 25 no-hitters thrown in MLB, four by the Red Sox and three by the Phillies. The Yankees have also been on the receiving end of a no-no during that time, the unforgettable six-pitcher debacle on June 11, 2003, which I had the bad fortune of attending. However, to even it out, I was also in attendance for Doc’s no-no in 1996.

All of this no-hit talk got me thinking that the Yankees seem somewhat due to no-hit another club, although clearly they’ve gone through much longer droughts than 11 seasons. As a Yankee, CC Sabathia has 15 starts of 7 or more innings and 3 or fewer hits:

Sabathia may have come closest to his first career no-hitter this past summer, when he was absolutely cruising against the punchless Mariners before multiple rain delays ruined what could have been the latest chapter in team history (not to mention seemed to derail what had been an utterly glorious run of pitching).

Still, this year’s team may be as poised as ever to take a run at a no-hitter, given the strikeout-heavy tandem of CC Sabathia and Michael Pineda.