At this point the wonderful news of Andy Pettitte’s return to the fold has already been covered to death, and so there’s no need to rehash all of the details here. As a Yankee fan I’m thrilled, and as a statistical analyst I’m equally thrilled (I did something of an ode to Andy a little over a year ago, so be sure to have a look at that). Andy has been a pillar of consistency throughout his career. To wit:

However, today I’m primarily concerned with reviewing Pettitte’s stuff, and thankfully with Brooks’ excessively robust and reclassified new PITCHf/x database, we can have a more advanced look at what Pettitte did during the last few seasons of his career than ever before. The following table I’ve compiled details takes a look at each of Pettitte’s five pitches during the last three years he was active across a variety of categories. PitchIQ is ostensibly the equivalent of OPS+/ERA+; 100 is league average, while anything above is above-average and below is below-average. This is outstanding, as it gives us an idea of how well or poorly Andy’s pitches fared in comparison to his peers. 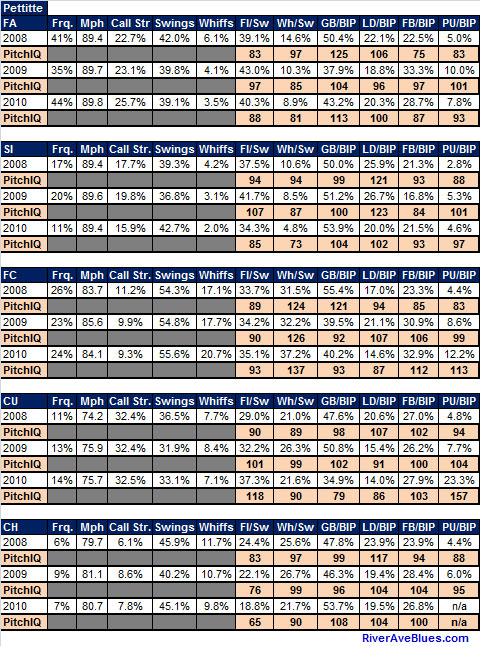 While he’s never had blow-you-away stuff, Andy’s been an incredibly successful Major Leaguer (and perhaps borderline Hall-of-Famer) due in part to his ability to hit his spots and change his speeds with a variety of secondary pitches that play off his 90mph fastball. According to Lucas’ and Harry’s reclassified PITCHf/x data, during his last three seasons in pinstripes Pettitte threw a fastball, sinker, cutter, curveball and changeup. Interestingly, ESPN’s Stats & Info blog put up a post last week detailing how one of the keys to Pettitte’s success in 2010 was his slider; however, according to this data Pettitte throws no such thing. I don’t know what data ESPN is being supplied with, but I’m inclined to go with the guys who manually reclassified more than 3 million pitches.

Per our data, Andy’s bread-and-butter — at least on a whiff/swing basis — has been his cutter, with a whiff/swing% an impressive 37% better than league average in 2010. None of his other pitches generated an above-average percentage of whiffs/swing. Part of the reason Andy’s able to get away with not having overpowering stuff is that his sinker and changeup each got him ground balls more than 50% of the time in 2010.

The one aspect of the PitchIQ Scores I’m still trying to get a firm read on is how to interpret them when it comes to LD/BIP and FB/BIP. I have an e-mail into Dan Brooks about this, and I’m pretty sure that we need to be looking at the PitchIQ Scores for these two categories as if they were “minus stats,” (i.e., below 100 is above-average and vice versa), given that general baseball convention holds that lower flyball and line drive percentages are thought of as a good thing. If my interpretation is indeed correct, both Pettitte’s curve and cutter have helped him limit the percentage of line drives, although the cutter is his only pitch that yields a FB% higher than 30%.

I also compiled Pettitte’s platoon splits from 2007-2010, although I won’t make your eyes glaze over by also posting a JPEG of that chart; feel free to download it here if you’d like. The gist of it is, Pettitte, as one would expect, handles righties and lefties with equal aplomb, although he’s really really good against same-side batters, with a PitchIQ whiff/swing of 148 on his cutter against lefties. For comparison’s sake, Jon Lester’s cutter against lefties during the same time period was 16% above average; while Cliff Lee’s is, rather surprisingly, 4% below league average. That doesn’t seem like it could be right, although then again for as good as Lee is I guess he’s always been a bit more about generating weak contact than outright overpowering hitters with strikeouts (though it’s not as if a 7.6 K/9 since 2007 is anything to sneeze at).

So how well will Andy fare? Clearly if he can come close to throwing the way he’d been throwing during 2010, the Yankees will be adding a bona fide #2/#3 lefty starter at some point in May, which is just awesome to think about. Of course, only Andy knows how his soon-to-be 40-year-old body will react to returning to the grind of retiring Major League hitters and whether he still has the craftiness he’ll need to succeed.

Mike covered Pettitte’s ZiPS projection earlier this week, which sees a 4.45 ERA and 1.5 WAR for Pettitte in 125.1 IP. Marcel has Pettitte at 73 innings of non-adjusted 4.07 ERA/4.06 FIP ball; while SG’s baseline forecast (which is park- and league-adjusted) calls for 127 innings of 4.01 ERA/4.00 FIP ball. The 65% CAIRO forecast is even sunnier, with 140 innings of 3.69 ERA/3.64 FIP ball. All things considered, those are some pretty robust projections for an older player who skipped an entire season of work, and if he’s able to approximate some sort of amalgam of those numbers the Yankees will be in very good shape.