Exhibition games start tomorrow and the regular season is five weeks away. Between now and then, we’re going to preview the 2014 Yankees not individually, but by grouping players (and personnel) together into different categories. Today we’re going to look at the guys who will put the Bombers in Bronx Bombers.

Blame injuries (Curtis Granderson, Mark Teixeira) and blame roster construction (Ichiro Suzuki and Chris Stewart replacing Nick Swisher and Russell Martin, etc.) for the decline in power. All of that and more was a factor. The Yankees set out to fix that problem starting at the trade deadline last summer and they continued to add some power-hitting pieces over the winter. I doubt they will be able to hit 240+ long balls this coming season, but they should improve on last year’s power production overall. Here are the team’s primary power sources.

Alfonso Soriano
To the surprise of no one, Robinson Cano led the Yankees with 27 homers last season. Soriano managed to finish second on the team with 17 despite not returning to the Bronx until the deadline. The Yankees were that power starved. Cano left for the Mariners over the winter but the club will now have a full year of Soriano, which will help compensate a bit.

Despite turning 38 last month, Soriano has put together back-to-back 30+ homers seasons these last two years and he’s hovered in the .225-.238 ISO range over the last four seasons. He’s no longer the 40+ doubles threat he was earlier in the career, but he has managed between 27-33 two-baggers the last three years. Soriano is a steady 60+ extra-base hit bat and, most importantly, the average direction and distance of his batted balls has not changed at all since 2007. From Baseball Heat Maps:

You can click the image for a larger view. The chart on the left is the horizontal angle of the ball off the bat — so +45° is the left field line and -45° is the right field line — and the chart on the right is the distance. Each red dot is an individual batted ball (grounders excluded, so this is everything he hit in the air) and the vertical clusters are individual seasons, so 2007-13 from left to right.

At Soriano’s age, any change in his batted ball angle or distance would have been a red flag and possibly an indication his bat has started to slow beyond the point of no return. Instead, Soriano continues to hit the ball to all fields (slightly more towards right field) and just as far as he did seven years ago. Sure, he’s had to make adjustments over the years, most notably switching to a lighter bat in 2012, but the end results are the same. He’s hitting the ball the same way he has for much of the last decade.

Now, that isn’t to say this will continue in 2014. Things can go south in a hurry when you’re talking about a player closer to 40 than 35, but there have been no obvious red flags in Soriano’s game to date. Outside of 2009, when he missed a month with a knee problem, Soriano has been a consistent 25+ homer, 25+ double, .220+ ISO hitter for a decade now, and aside from sudden age-related decline or injury, there is no reason to expect anything different in 2014. He is the Yankees’ best full-time right-handed power source by frickin’ far.

Brian McCann
New York’s catchers hit eight total homeruns last season, three of which came from Frankie Cervelli before he got hurt in mid-April. The catcher position was an offensive blackhole in 2013 and the Yankees rectified that problem by giving McCann a five-year contract worth $85M. The just-turned-30-year-old is one of only two catchers with 20+ homers in each of the last three seasons (Matt Wieters) and one of only eleven players (all positions) with 20+ homers in each of the last six seasons.

Of course, McCann hit all those dingers while with the Braves in Atlanta, playing his home games in a park that has been perfectly neutral in terms of left-handed homers over the last five seasons according to the park factors at FanGraphs. His lefty power was extra desirable to the Yankees because of Yankee Stadium’s short right field porch, which is tailor made for McCann’s pull happy swing:

Don’t trick yourself into thinking McCann is something he isn’t. This guy is a pure grip it and rip it hitter who is going to try to yank everything over the right field wall. He’s going to hit .250-ish and walk enough (9.9% walk rate since 2011) to post decent but not great OBPs, but his real offensive value comes from his power. Homers too, forget about doubles.

I think the whole “sign a left-handed hitter and he’ll automatically hit a bunch more homers in Yankee Stadium” idea is generally overstated — not everyone’s swing fits the ballpark (see: Overbay, Lyle) — but McCann is exactly the kind of hitter who can really exploit that short porch. His career-high is 24 homeruns (2006 and 2011) and I wouldn’t be surprised if he finishes this year with 30-35 homers, especially if he spends some of his catching off-days at DH.

Carlos Beltran
Over the last three years, only ten outfielders have racked up at least 50 extra-base hits in each season. Soriano is one of them and another is Beltran, his new teammate. Heck, if you want to bump up the arbitrary criteria, Beltran is one of only four outfielders with at least 55 extra-base hits these last three years. Soriano is not one of the other three.

The Yankees finally snagged their white whale (well, I think he was the fans’ white whale more than the team’s) this winter by signing Beltran to a three-year deal worth $45M, nine years after declining to sign him at a discounted rate before he joined the Mets. Beltran has aged remarkably well as a hitter, dipping below a 120 wRC+ only once in the last eight years, and that was his injury-plagued 2010 campaign. He’s also managed 20+ homers and 25+ doubles in each of the last three years and six of the last eight years, with 2009-10 being the only exceptions. Injuries limited him to 145 total games those two seasons.

Unlike Soriano and McCann, Beltran is a switch-hitter. He maintained a .200+ ISO against both righties and lefties these last two years (.214 vs. LHP and .202 vs. RHP) but he is a different type of hitter from each side of the plate. Beltran is pretty much a dead pull hitter as a righty and an all-fields guy as a lefty, though he does the most damage from the left side when he pulls the ball to right field at this point of his career (spray charts). That’s perfectly fine and plays right into Yankee Stadium. The concern is the declining distance of his batted balls: 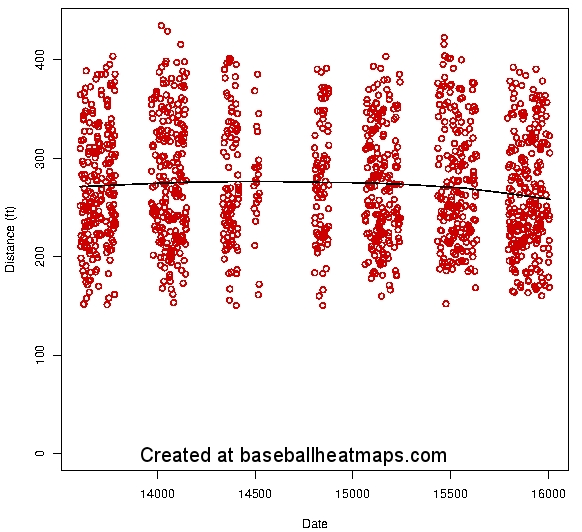 Given his age (37 in April), that little downtick last year (really the last two years) is a concern. It’s not much, but pretty much anything is a red flag with a player this age. On average, Beltran did not hit the ball as far last year as he did the year before. Could be a one-year fluke, could be a sign of age-related decline. We’re going to find out in the coming months.

I am pretty confident Beltran will be a 20+ homer, 25+ double guy for the Yankees this coming season and right now that is the most important thing. He could fall completely off a cliff in 2014 but it would be a surprise to me. (The 2015-16 seasons are another matter for another time.) Even if he is starting to slip due to age, some of Beltran’s would-be homers should still go for doubles in 2014. The guy is such a good pure hitter and it’s not like he was bad in 2013. The somewhat early signs of decline are there though. No doubt about it.

Mark Teixeira
Teixeira is a total unknown heading into this season. He missed almost all of last summer with a wrist injury, an injury that required season-ending surgery after a brief and failed return to the lineup. Teixeira is currently taking batting practice and is slated to start playing in Spring Training games in early-March, but wrist injuries are known to sap power even after the player has been cleared by doctors.

Even as his overall production has declined, the 33-year-old Teixeira has always remained a source of homers, hitting at least 33 dingers from 2008-11 and then 24 in 123 games in 2012. He has never once had a sub-.220 ISO during a full season in his entire career. Teixeira has admitted to changing his hitting style to take advantage of the short porch as a left-handed hitter and there’s no reason to think he’ll do anything differently going forward.

Guys like Jose Bautista and David Ortiz had similar wrist tendon sheath problems in recent years and it took them a few months before returning to their previous form. It’s easy to say Teixeira will hit for power because he’s always hit for power, but there’s just no way of knowing what he can do following the injury. He’s included in this post because hitting the ball over the fence is his thing, but there is a chance he might not do that in 2014, at least not early in the season. It might take him a while to get back in the swing of things.

Kelly Johnson
The Yankees gave Johnson a nice little one-year, $3M contract back in December and he is now their everyday third baseman in the wake of Alex Rodriguez’s suspension. The 32-year-old isn’t much of a doubles guy but he has hit at least 16 homeruns in each of the last four seasons, and he has power to all fields:

Johnson can hit the ball of the park in any direction, which is a good thing. He’ll get some help from the short porch but he’s also shown he’s strong enough to drive those outside pitches the other way. Is he ever going to hit 26 homers with a .212 ISO like he did in 2010 again? Probably not, but the 16 homeruns he hit in 2012 and 2013 might become 18-22 in the Bronx. Considering the Yankees only had one guy mash 18+ taters last summer, getting a similar number from a player like Johnson, who is slated to bat seventh, will be a welcome addition.

On the other end of the spectrum, the Yankees do not figure to get much power from second base (Brian Roberts), shortstop (Derek Jeter), left field (Brett Gardner), or center field (Jacoby Ellsbury) this year. From that group, only Jeter (15 HR in 2012) and Ellsbury (outlier 32 HR in 2011) have managed to hit double-digit homers at some point in the last three years and neither is a lock to do it in 2014. Sure, Ellsbury might pop a few extra dingers with the move into Yankee Stadium, but for the most part his ground ball/opposite field approach won’t boost his homer total all that much. Those four guys will pick up some extra-base hits with their speed, but over-the-fence power isn’t happening. Soriano, McCann, Beltran, Teixeira, and Johnson will be leaned on for homers and extra-base hits.

Fan Confidence Poll: February 24th, 2014
Gardner's extension another sign of change that needed to be made