For the umpteenth consecutive offseason, the Yankees need to add a starter to their rotation this winter, preferably two. Ivan Nova (elbow) won’t be back until at least May while CC Sabathia (knee), Masahiro Tanaka (elbow), and Michael Pineda (shoulder) will all carry injury concerns heading into 2015. Shane Greene and David Phelps are nice pitchers I would rather see penciled in as the sixth and seventh starters rather than numbers four and five.

Earlier this month we heard the Yankees were planning to “aggressively” pursue re-signing right-hander Brandon McCarthy, which makes total sense. He was excellent during his brief time in pinstripes, pitching to a 2.89 ERA (3.22 FIP) in 14 starts and 90.1 innings, and usually that’s enough to get a guy a new contract. McCarthy is arguably the fourth best free agent starter on the market behind Jon Lester, Max Scherzer, and James Shields though, making him a popular second tier target. Stint in pinstripes aside, is McCarthy actually worth pursuing? Let’s look.

A Quick Note About Performance

During his year and a half with the Diamondbacks, McCarthy was bad. Just … bad. I don’t know how else to put it. He made 40 starts and threw 244.2 innings with Arizona and had a 4.75 ERA and 3.78 FIP. That’s bad. If you allow more than one run for every two innings pitched over that many innings, it’s bad. You really have to squint your eyes and adore the peripherals to ignore the fact that lots of runs were being scored against McCarthy. That is the pitcher’s job at the end the day. Keep runs off the board. Style points don’t matter.

McCarthy reinvented himself as a sinker/cutter pitcher with the Athletics way back in the day — this story has already been told a million times, no need to repeat it here — and he had a 3.29 ERA and 3.22 FIP in 43 starts and 281.2 innings with Oakland during the 2011-12 seasons. That looks an awful lot like the numbers he put during his short time in the Bronx, no? The same FIP and the ERA difference could be sample size noise or the result of the decline in offense around baseball. Or both!

I think it’s important to note here that, within the last few years, a lot of players joined the D’Backs and got worse and/or left the D’Backs and got better. That’s part of the reason GM Kevin Towers was fired in September. Players who are/were thriving elsewhere stunk with Arizona. McCarthy falls into that group. So does Ian Kennedy, Trevor Cahill, Martin Prado, Justin Upton, Trevor Bauer, and a bunch of others. It’s happened often enough that it has to be something more than a coincidence at this point.

Now let’s get down to the nuts and bolts. As you know, McCarthy said the D’Backs did not let him throw his cutter during his time there but the Yankees, who are as cutter-happy as any organization in baseball, allowed him to throw it. It’s easy to attribute his success in New York to the return of his cutter, except that’s not really what happened. Here’s a table from our Season Review post:

McCarthy only threw 10.3% cutters with the D’Backs before the trade this past season, so yes, he did technically throw more cutters with the Yankees this year. But compared to last season (34.6%) he actually threw fewer. He did throw more sinkers with Arizona, which jibes with the alleged “no cutters” policy, and his curveball usage has remained approximately the same over the years.

It’s possible there is some PitchFX weirdness going on here, particularly during McCarthy’s time with the Yankees. Maybe the system misclassified some cutters as four-seamers — cutters are usually misclassified as sliders and vice versa — and boy, that would explain a lot. Maybe McCarthy actually did throw more straight four-seam fastballs in New York. That could have led to his increased effectiveness as well. I’ve always thought having multiple fastballs was a good foundation for success despite having zero evidence to support it. Just one of those things I believe.

Anyway, here’s something else from our Season Review post. McCarthy added a frickin’ ton of velocity — across the board, not just the fastball(s) — this past summer: 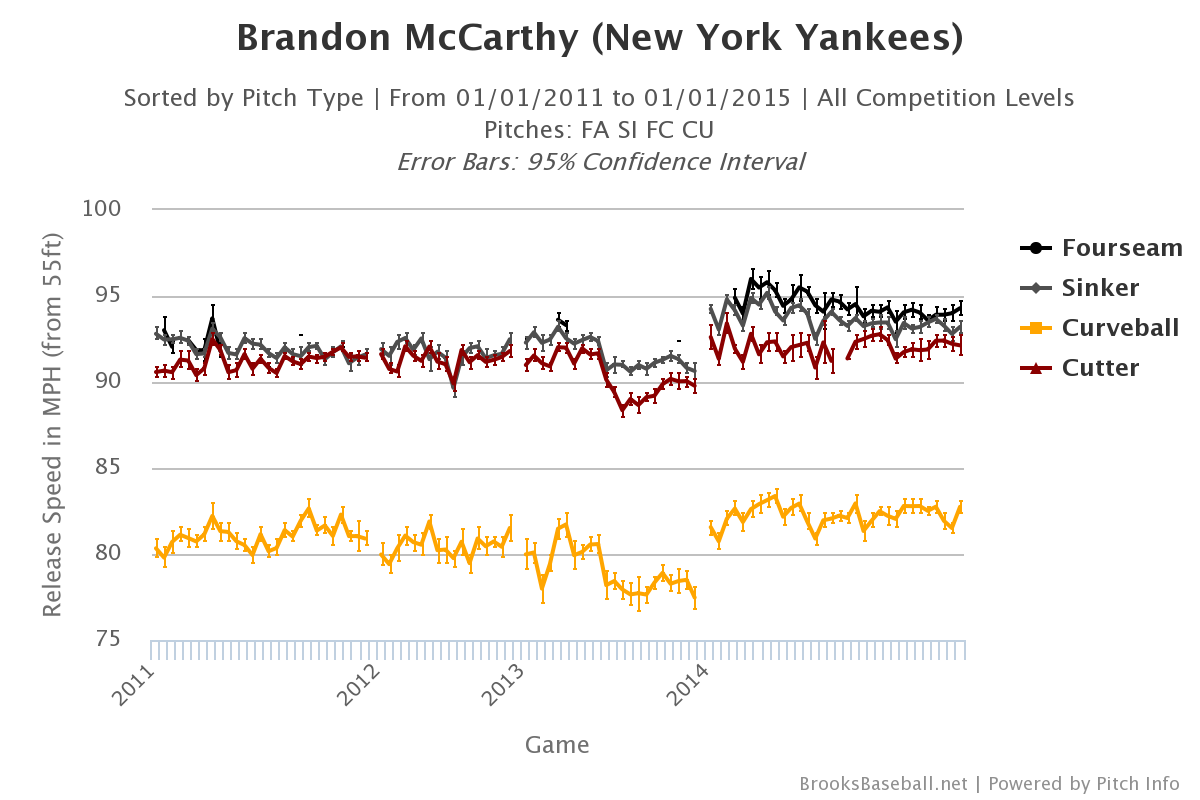 That’s not a slight uptick in velocity. McCarthy added 3.2 mph to his average curveball velocity, 2.0 mph to his sinker, and 1.5 mph to his cutter from 2013 to 2014. That’s substantial and who in the world knows if it will last next year. We’ll get into McCarthy’s injury history and offseason workout routine in a bit, but adding roughly two miles an hour to your arsenal across the board at age 31 is not something that happens all that often.

So, with that in mind, let’s take a second to look at the effectiveness of McCarthy’s individual pitches over the years. I’m not going to lump this together by team or whatever, I want see what happened each year because a pitcher’s stuff does change over time. Guys add movement and lose velocity, stuff like that, often unintentionally. It’s unavoidable. The innings build up and the arm can’t do what it once did. Here are the swing-and-miss rates and ground ball rates of McCarthy’s individual pitches over the years (via Brooks Baseball):

That table isn’t as messy as I expected. Phew. It’s best to read each column top to bottom, don’t try reading across each row.

Whiff rates and grounder rates tend to stabilize very quickly, within the first 100-150 pitches of each individual pitch, a level McCarthy has easily cleared the last four years. There’s no sample size issue this year. The improvement in McCarthy’s swing-and-miss and ground ball rates seem to be tied directly to his uptick in velocity. More velocity means more swings and misses, that’s been analyzed and correlated to death. The same is not necessarily true for ground balls overall, but it could be for McCarthy given the movement on his pitches.

This brings us back to where we were before: is McCarthy going to sustain this improved velocity? Normally the answer would be no, a 31-year-old pitcher with McCarthy’s of injury history won’t continue throwing this hard, but there might be other factors in play here, specifically his health. I’ll get into that in a bit, I promise. The other question is can he remain effective even if the velocity isn’t here to stay? I don’t see why not, velocity isn’t everything, but at the end of the day we’re not going to know the answer to either of those questions until he actually gets back on a mound in 2015 and pitches.

McCarthy’s injury history is scary as hell. It’s almost all shoulder problems too, which are extra scary. McCarthy nearly died after being hit in the head by a line drive in September 2012 — he needed emergency surgery for a epidural hemorrhage, a brain contusion, and a skull fracture — but, as serious as that was, it was a fluke injury and he has since made a full recovery. The shoulder problems are chronic.

From 2007-13, McCarthy visited the disabled list at least once each season with some kind of arm injury. Again, most of them shoulder problems. Here’s the list:

Like I said, scary. Scary scary scary. But the good news is McCarthy stayed healthy in 2014 — he threw 200 innings on the nose between the Yankees and D’Backs after never throwing more than 170.2 innings in a season — and it has now been three full years since he last suffered a stress fracture in his shoulder. Soreness and strains keep you off the mound just as well, but “stress fracture” just sounds scarier. Maybe I have that backwards and the soreness and strains are the bigger issue. I’m not a doctor, I just play one on a blog.

In an effort to stay healthy this past season, McCarthy changed up his offseason routine last winter and focused on getting stronger. “I spent a lot of time in the off-season working on that, doing everything I could to get to a place where I was as strong as I could be physically and mentally,” he said to Nick Piecoro in Spring Training. “That’s shown up early. I feel like myself again. With that, in games I’m sharper, more focused, and the results kind of follow that. Now it’s just staying in that same place.”

The new offseason routine apparently worked, because McCarthy stayed healthy all season and he came out throwing much harder than ever before. There is a tangible reason behind the improved health and velocity. It’s not like he kept doing what he doing before but suddenly stayed healthy and started throwing harder this past summer. Remember when the Yankees signed A.J. Burnett? Almost all the talk at the time was about how much of an injury risk he was, yet Burnett stayed healthy and has thrown at least 185 innings in each of the last seven years. Injury prone pitchers can suddenly become durable, even after age 30.

Let’s defer to people a lot smarter than me for what it might take to sign Mr. McCarthy this winter:

Jon Heyman reported last week that McCarthy is waiting to see what Lester, Scherzer, and Shields get before signing himself. I’m sure he’d sign quickly if a team makes him a nice offer, but waiting to see what those three get isn’t a bad strategy. It’s not like the pitching market will dry up completely once those guys sign, and McCarthy would only make himself that much more valuable by being the best available starter later in the offseason.

Given what we’ve seen early this offseason as well as the last two or three offseasons, I’m guessing the first team to step forward and offer that third guaranteed year will get McCarthy. A deal that long can be scary for a pitcher with his injury history, so the team would either have to be very desperate or very comfortable with his medicals. The Yankees had McCarthy for a few weeks this year and got to see his work ethic and that sort of stuff firsthand. That matters. It doesn’t hurt that they had plenty of time to review his medicals and various routines either.

If the Yankees are serious about avoided long-term contracts this offseason — we’ve already seen reports to the contrary and it’s not even Thanksgiving, so who knows — they’re unlikely to find a better pitcher on a short-term contract that McCarthy. There are major concerns about his injury history and legitimate questions about whether the velocity uptick is a long-term thing, but good luck finding a non-elite pitcher without some kind of question marks. That the Yankees are planning to “aggressively” pursue McCarthy tells me they are comfortable with the medicals, and that’s a necessary step one for bringing him back to New York.