Masahiro Tanaka’s numbers from his last start against the Orioles on July 23 looked solid enough to declare the outing a success — he pitched into the eighth inning, got seven strikeouts, didn’t walk a batter and allowed just three runs on five hits. Yet that sentence leaves out one important number: Tanaka also gave up three home runs.

If this was a mere blip in his season gamelogs, there might not be much to discuss here, and we could dismiss the trio of homers as a random event that happens to even the best pitchers in the sport. But those home runs were the 13th, 14th and 15th that Tanaka has allowed this season, matching his total from all of 2014 in 55 fewer innings pitched.

Not only is Tanaka more homer-prone this season compared to last year, but he’s also giving up longballs at one of the worst rates in the league. His 1.65 homers allowed per nine innings is the fifth-highest mark among pitchers with at least 80 innings pitched. Tanaka is one of 29 pitchers that have allowed at least 15 homers this season; his 325 batters faced are the fewest among that group.

Tanaka was frustrated after giving up those three homers against Baltimore, especially the two in the eighth inning that sent him to the showers.

“I felt pretty good all the way through the day, and you want to kind of go out of the game strong, but I gave up those two home runs,” he told reporters after the game through a translator. “So, not particularly happy about that, but we’ll adjust and go about it next time out.”

Joe Girardi acknowledged the issue, but wasn’t too worried because Tanaka was able to limit the damage.

“It’s not what you want to see,” Girardi said in his postgame press conference. “But you can survive giving up solo home runs. You can survive and be very successful.”

So do we make of the situation, do we need to press the panic button and start worrying about Tanaka’s sky-high home run rate? On to the analysis!

The big number on Tanaka’s FanGraphs.com page that sticks out like a sore thumb is his 2015 home run to fly ball rate of 17.9 percent. That’s the third-highest rate in the majors (min. 80 IP) and well above the league average rate of roughly 10 percent.

Typically, pitchers with inflated homer-to-fly ball rates should see some regression to the mean over the course of the season, and so we’d expect fewer of his fly balls to go over the fence in August and September. Of course, that’s not always true — if you’re continually throwing meatballs and giving up lots of long hits and hard contact, you’re still probably going to allow a lot of homers, regardless of what the statheads say. But that doesn’t seem to be the case with Tanaka, who legitimately might be suffering from some bad luck so far this year.

The right-hander has one of the highest soft-contact rates in the league (21 percent), and his hard-contact rate (29 percent) is right around the league average and even lower than last year (35 percent). Tanaka’s average fly ball distance is up a few feet from last year (287 vs. 284), but it still doesn’t crack the top-50 among pitchers this season. And Tanaka is not throwing more pitches right down the middle of the plate, either. His percentage of pitches located in the “heart” of the strike zone is the virtually the same this year (20.6%) as last year (20.0%). Comparing his heat maps from last year and this year, he still seems to pounding the bottom of the zone and keeping his pitches out of the hitters’ sweetspot. 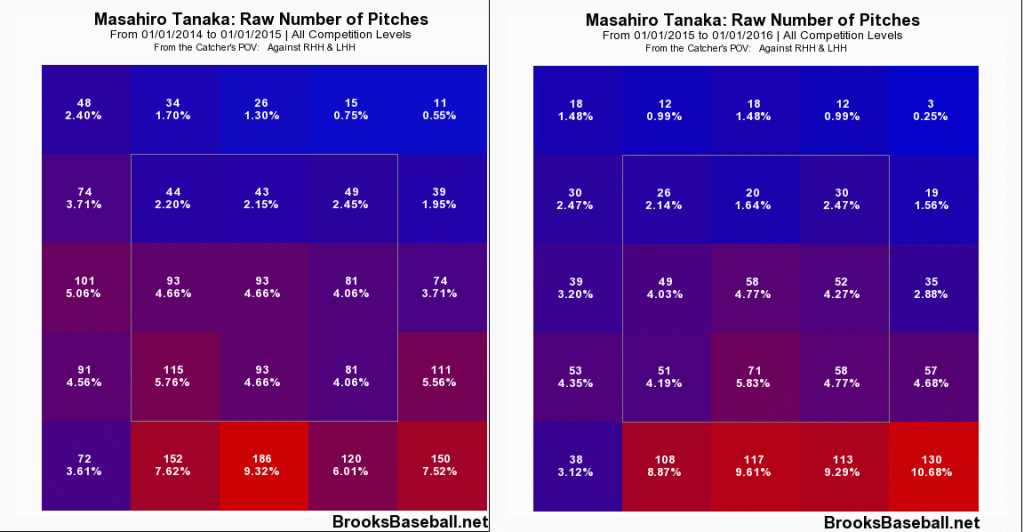 Another factor to consider is that he’s had to deal with one of the toughest schedules in the majors this season — the combined slugging percentage of the batters he’s faced (.412) ranks seventh-highest among pitchers (min. 80 IP). Looking at the list of the 13 players that have taken Tanaka deep, you can see he’s been victimized by some pretty good power hitters. Eight of them have hit at least 15 home runs this season and two rank in the top-6 in the majors (Bryce Harper, J.D. Martinez). The only lightweights on the list are probably Jose Altuve and Derek Dietrich.

Another encouraging number is that he’s not giving up a ton of homers when ahead in the count and in those situations when he should be putting away batters. Just four of his 15 home runs allowed have come in pitcher-friendly counts, and he’s given up just one two-strike homer all season.

However, he is finding trouble when he falls behind early and into too many fastball counts. He’s allowed eight homers after throwing a first-pitch ball, but just five after getting to 0-1 in the count. Nine of his 15 homers have come off either his sinker or four-seamer, a pitch that has been a hot topic this season and one that he continues to struggle with even after making some adjustments recently.

The bad news is that the box score stats say that Tanaka has been homer-prone this season, and you can’t erase the 15 longballs he’s already allowed.

The good news is that a deeper analysis into his core numbers shows that there probably isn’t much to worry about right now, and there’s every indication that his luck should even out during the final two months. So what do you think, is the glass half-empty or half-full?