The following is a guest post from Adam Moss, who you know as Roadgeek Adam in the comments. He’s previously written guest posts on Tim McClelland, Frankie Crosetti, the No. 26, Casey Stengel, and Leo Durocher. 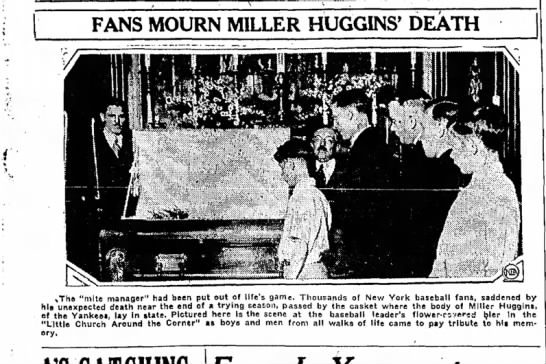 The baseball world and especially the Yankees’ world took a major blow on September 22, 2015, when Lawrence Peter “Yogi” Berra died at the age of 90. Berra was a Yankee legend for many generations dating back to the 1940s. Grandfathers, fathers, sons and grandsons around the country knew the name Yogi Berra and would always know what exactly Yogi stood for. Yogi won 13 World Series rings as player, manager and coach for both of the New York teams; the Yankees and the Mets and I think both teams’ fans are hurting right now (more the Yankees than the Mets), because a legend has moved on to the baseball field in heaven.

At the same time as we’re mourning the death of Berra, the 86th anniversary of a similar death, but much more sudden approaches us today. On September 25, 1929, Yankee manager Miller Huggins, the former Cincinnati Red & St. Louis Cardinal second baseman died suddenly at the age of 51. On Friday, September 20, Huggins had been admitted to St. Vincent’s Hospital in Greenwich Village with erysipelas of the face, which basically means the face is bright red due to an acute infection of the upper dermis and superficial lymphatics. His condition had been worsened due to a case of influenza, and though blood transfusions had been performed to help his condition, last rites were called at 12:10 PM on the 22nd. On September 25, the “Mighty Atom,” Miller Huggins was gone.

A Career of Successful Managing

Miller Huggins, up until his death in 1929, had been an excellent manager for the New York Yankees and St. Louis Cardinals. But the story of Miller Huggins goes back much further to a kid who was basically handicapped by his own weight for the game of baseball that he loved. The Mighty Atom, standing a mere 5ft 5in tall, worked his tail off against his parents’ wishes (they wanted a lawyer out of him), but instead decided at 16 to make baseball his career. He however, did study at the University of Cincinnati and was accepted to the state bar in 1902.

However, in 1899, Huggins turned his attention to baseball as well, playing his first professional game as a second baseman with the Mansfield Haymakers for the very original Class-B Interstate League that existed as a group of teams through the Midwest. In 1901, Huggins moved onto the St. Paul Saints and showing strong ambition and desire to play the game of baseball, the Cincinnati Reds bought the contract of Huggins from the Saints in 1904. He became a Red permanently for the next six seasons, showing an incredible ability to get on base, even with little power, having a major league high 103 walks in 1905 alone, with a low 46 strikeouts. While Huggins never had any power, his on-base percentage rates were enough to keep him in the league for many years.

On February 3, 1910, the Reds traded Huggins to the St. Louis Cardinals along with outfielder Rebel Oakes and pitcher/infield/outfielder Frank Corridon for pitcher Fred Beebe and infielder Alan Storke. Keeping up with his OBP-heavy playing skills, Huggins eventually was declared a player-manager for the Cardinals, hoping to grow a really lackluster franchise into something strong. However, his performance as a manager of the Cardinals came with lackluster success as he could never get the team higher than third in the league. In 1918, he was hired by Col. Jacob Ruppert and Col. Tillinghast L. Huston to form a championship team out of the New York Yankees, who had yet to win a World Series. Now purely a manager, Huggins successfully started getting the team up to snuff, threatening to win the AL pennant in 1919 and 1920, before winning it in 1921. However, in the final 9-game World Series ever, the Yankees lost 3 games to 5 against the rival New York Giants. In 1922, the same two teams met once again in the World Series, but the Yankees were swept in 4 games. After four years of trying, 1923 was the charm. The Giants and the Yankees clashed once again, but this time, the Huggins-led Yankees emerged victorious with a 4-2 series win.

With the win in the 1923 World Series, Huggins had basically created his “machine” for winning championships. While he failed to reach the series in 1924 and 1925, the Yankees returned in 1926, but lost to the Cardinals 3 games to 4. Finally, the next season, the “machine” had its best season ever, led by those such as Babe Ruth, Lou Gehrig, Pat Collins, Tony Lazzeri and Waite Hoyt, the 1927 Yankees won an astounding 110 games with only 44 losses, one-quarter of which were to the Cleveland Indians. That year, the hot Yankees walked into the World Series and beat the Pittsburgh Pirates 4 games to none. In 1928, the same team basically walked into the World Series and swept the Cardinals in 4 games.

The 1929 season was a bit different. Even though the team had upgraded with players such as Bill Dickey and Leo Durocher, the “machine” did not have the same fight in them. The Philadelphia Athletics had basically come in and beaten up on the Yankees and Miller Huggins felt like the entire 1929 season was tough because of pennant races. There is a general belief that the poorer performance in the 1929 season affected Huggins emotionally and health-wise, because he couldn’t stand to see his “machine” fall apart. By September 4, it was clear that Huggins had thrown in the towel about defeating the Athletics and taking the American League pennant. Col. Ruppert suggested for Huggins sake to take a vacation and that he would be guaranteed at least a 2nd place finish that year. Huggins denied and wanted to stay with the team, but his health was getting to him, especially with a boil that he ignored and it turned into the disease that eventually took his own life. 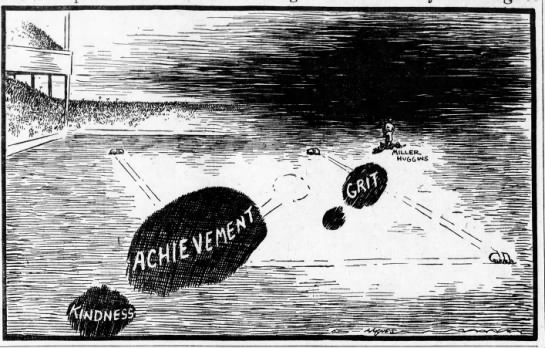 The response to the death of Huggins was extensive. Huggins had a profound impact across the country and it didn’t seem like the baseball season mattered anymore, even though Art Fletcher had taken over as manager for the last 11 days of the season. On September 25, the Yankees defeated the Red Sox 11-10 in 11 innings without knowledge of their manager’s passing until the 6th inning, when players from both the Red Sox and Yankees lined up at home plate and had a moment of silence for the late Huggins. At the Polo Grounds, news of Huggins’ death came over telegraph and flags were moved off their poles and the New York Giants honored the late Huggins with a silent tribute. A lone banner ran at half-mast that honored the manager as “the last Flag” before a game with the Boston Braves.

One of the first syndicated columns about Huggins’ death talked about how size didn’t matter to him, even though he was only 5ft 5in, he commanded respect and obedience from players who played for him and with him. People had accused Huggins of having the biggest checkbook owners and a team that could not lose was his only reason for being successful, but it was tougher than that. Yet, this author saw the 1925 season, in which the Yankees finished in 7th place, as a reason to look away from that perspective. Huggins is the one who re-corralled Babe Ruth’s behavior as a Yankee in 1926, and was the reason Col. Ruppert never broke up the special 1927 Yankees because they were “too strong for the rest of the league.” The columnist said: “Now Huggins has gone. Perhaps the greatest possible testimonial to his ability will be the struggle which the Yankees owners face in trying to find a man to take his place.”

Baseball for the Yankees stopped on September 27, 1929 for their captain, who David P. Sentner stated Huggins had “a heart as big as a baseball park.” At the Little Church Around the Corner, Huggins had a team funeral held in his honor, and Sentner stated that Huggins would’ve been proud for the turnout and respect. Fans basically came in droves to the church to visit the open casket of the passed manager, because they mourned a winner in a city which loves winners. The Yankees players would march behind the casket as it was shipped to Cincinnati to be buried with his late parents. This was led by Babe Ruth, with whom Huggins originally had a rocky start with, but soon became good friends. Sentner believed that no one else on the team suffered more from the loss of Huggins than Ruth.

At the same time, it struck Col. Jacob Ruppert hard. Col. Ruppert had hired Huggins in 1918 to create a championship team out of the Yankees and stuck by him, even with the problems in the 1925 season. Ruppert was visibly shaken that Huggins was gone (along with Ed Barrow). Ruppert, a multi-millionaire, always attended World Series games up to 1929, but in 1929, he could not attend, still extremely hurt by the death of Huggins. A lot of what made things a lot more painful was that at his death bed, Huggins could not remember people who had visited him, such as his sister, Myrtle, in-laws, a good friend named Robert Connery, and most importantly, Col. Ruppert and Ed Barrow.

One of his final recorded statements about his 1929 season was this: “I guess I wasn’t born to be a loser.” Miller Huggins was never a loser, except in the fight for his own life. Baseball was Huggins’ life and he died playing the game he loved because he ignored his health in the same process. I do not mean that as demeaning in any way, just a statement of fact. Huggins was the first true Yankee manager, the one who brought the first three of 27 World Championships to the Bronx, and the first to be Col. Ruppert’s right-hand manager. While Huggins was replaced by Bob Shawkey as manager, I don’t think Col. Ruppert fully ever healed from the death of Huggins before his death in 1939. The origination of Monument Park is thanks to a monument built in center field at Yankee Stadium in 1932 for Miller Huggins. The late Huggins was named to the Hall of Fame in 1964 by the Veterans Committee, but it was for a career that ended much too soon, 86 years ago today.