River Ave. Blues » Chad Green’s need for a third pitch is obvious after his first big league start
Rotation and middle relief remain problems as the offense starts to turn things around
Cuban infielder Yulieski Gurriel would be "super happy" to join the Yankees

Thanks to Luis Severino’s triceps injury, rookie right-hander Chad Green made his MLB debut last night, allowing six runs (four earned) on eight hits and a walk in four-plus innings against the Diamondbacks. He struck out five and allowed two homers. It wasn’t the worst first career start by a Yankee, but it wasn’t great either.

Despite the numbers, I thought Green’s raw stuff looked pretty good most of the game. His fastball was consistently in the mid-90s and he showed a sharp — albeit inconsistent — mid-80s slider at times as well. Here’s the PitchFX info for his outing, via Brooks Baseball:

Getting six whiffs on 30 total swings against the fastball is really good! The slider … not so much. Green threw 19 sliders and only eight were strikes, though, to be fair, home plate umpire C.B. Bucknor seemed to have a tight zone all night. Both teams had some borderline calls not go their way.

What we don’t see in the PitchFX data is a third pitch, or more precisely a second offspeed pitch. The scouting report on Green says he started throwing a splitter last season but we sure didn’t see it last night. Arizona’s left-handed batters went 4-for-10 with only one strikeout and three swings and misses against Green. The lack of a second secondary pitch was a clear weakness.

This was never more obvious than during Jake Lamb’s fifth inning at-bat with runners on first and second. Green got ahead in the count 0-2 against the left-handed batter, but he had nothing to put Lamb away, so eventually the count ran full, then bam. Homer. 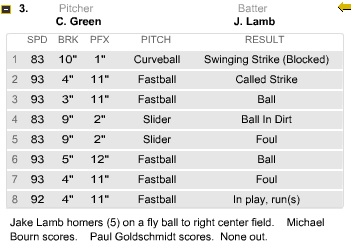 (PitchFX classified a slider as a curveball for whatever reason. The manually classified data at Brooks Baseball corrected it.)

If there was ever a time to show the splitter, that was it. Green was facing Lamb for the third time — Lamb had a hit in each of his first two at-bats — and he had him in an 0-2 count with two runners on base in a tie game. It didn’t even need to be a good splitter. It only needed to be something different to keep the hitter guessing.

Green’s slider has reportedly improved over the last few weeks thanks to some tinkering by Triple-A Scranton pitching coach Tommy Phelps — “It seems to have some more depth, which is important. Obviously he’s got a very good fastball, and it’s got some sink to it,” said Joe Girardi to Wally Matthews — and that’s good. Improving a breaking ball is a positive. He’s going to need more than that slider to remain in the rotation long-term though.

Left-handed batters have punished Green in the minors — they hit .299/.355/.451 against him in a full season at Double-A last year — so this is an ongoing problem. The scouting report says he has a splitter, and I’m sure he does somewhere, but we didn’t see it last night and it hasn’t kept even minor league lefties at bay. I was impressed by Green’s fastball/slider combination overall against the D’Backs. That won’t be enough though. He’ll need to show a third pitch more often to have success as a starter going forward.