Being a sports fan means you’re going to make predictions or statements or give takes; with that comes a lot of being wrong. Most recently, I was most wrong about fellow former UConn Husky and current Detroit Piston Andre Drummond. After he left Storrs following his freshman year, I thought he’d struggle in the NBA thanks to a lack of a refined offensive game. I was wrong and I was very glad to be wrong. Before him, I was (somewhat) wrong about Brett Gardner.

Though I’ve long been a fan of Gardner’s, I wasn’t always sure how he’d fare long-term in Major League Baseball. Despite a good batting eye that helped him get on base just about everywhere he played, I had concerns regarding his general lack of power. I thought that once he got through the league a time or two, pitchers would be able to knock the bat out of his hands by challenging him, thus negating his good eye at the plate and limiting his effectiveness as a hitter. I was wrong; Gardner’s lasted a long time in the league and has been a productive player for most of that time.

He’s dropped back down to relatively normal levels of his power so it’s not horribly alarming, but it’s still disappointing to see since that added dimension of power helped make Gardner an even more valuable player. As such, it’s still worth looking at why these numbers have dropped back down. When Gardner was going right with his homers, he was pulling inside pitches over the short porch in right field at Yankee Stadium. Let’s take a look at Gardner’s pull numbers over the last three years, incorporating HR/FB%; Hard Hit%; and ISO (all per FanGraphs):

While Brett is still hitting for good power to his pull field, it’s down significantly from the previous two years. 2015 was a little fluky with regards to the HR/FB% as Gardner tended not to hit many fly balls last year; the ones he did hit, however, left the park at an insanely high rate. It’s expected that there’s been a drop off this year, but that’s been coupled with a steadily dropping hard hit rate to the pull field. Why might this be? Well, intuitively, when you’re pulling the ball, you’re doing damage on inside pitches. Is that happening for Gardner this year compared to 2014-15? Not so much. 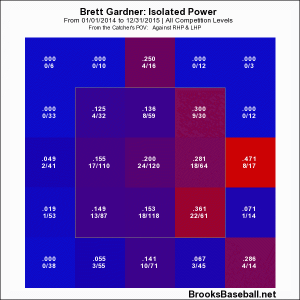 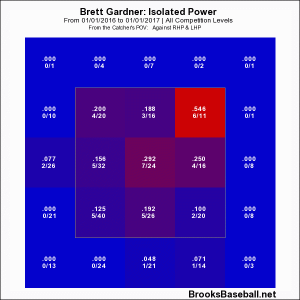 That inside power has seemingly disappeared in 2016. Up and in, in the zone, Gardner’s still doing damage: .546 ISO. Middle-in, in the zone is still solid at .250, but there’s been a drop off from 2014-15. The low-in, in the zone and the two out of zone locations have produced virtually no power.

There’s no quick and easy answers in baseball, but a rough estimate for why Gardner’s power has dropped this year is that he just isn’t doing damage on inside pitches and isn’t pulling the ball with as much authority to his pull field as he did in the previous two seasons. Despite the lack of power, Gardner has still been reasonably productive in 2016. He’s walking at his highest rate since 2011 (again, discounting 2012’s limited scope) and striking out at his lowest rate since 2011. But the lack of power has Gardner’s wRC+ under 100 for the first time since 2011. While the team was nowhere near reliant on Gardner for power coming into 2016, the lack of it — and the general lack of production from Alex Rodriguez and Mark Teixeira — has been a disappointment. Hopefully next year, Gardner can regain his power stroke and increase his productivity.