That was the best worst win of the season. Or maybe the worst best win? I’m not sure. The Yankees blew a 4-0 lead, managed to retake the lead, then hung on for dear life in the tenth inning. They beat the Royals by the score of 5-4 on Tuesday. Phew. That was a doozy.

Four Early Runs
It was obvious early on Edinson Volquez did not have it. I mean, he hasn’t had it pretty much all season, but right away in the first inning he couldn’t locate his fastball or get his curveball over. His only reliable pitch was his changeup, and he had nothing to set it up. Brett Gardner and Jacoby Ellsbury reached base to start the first, and while the Yankees blew the opportunity, it seemed like only a matter of time until they got to Volquez.

Sure enough, the Yankees put three runs on the board in the very next inning. Brian McCann started things with an opposite field leadoff single, and after Chase Headley flew out, Aaron Judge laid into a 2-1 fastball right out over the plate for a two-run home run. Look at the location: 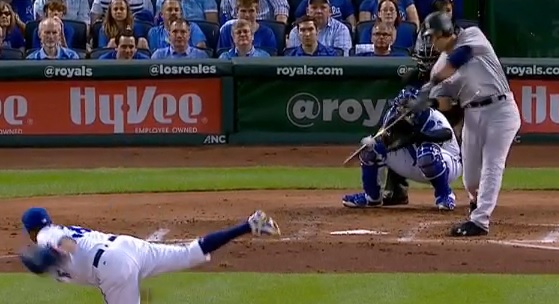 It’s like Judge reads RAB. I wrote about his passivity earlier on Tuesday, and how he was letting too many hittable fastballs go by. Volquez put one on a tee for him right there, and Judge gave it his A-swing. That young man is not not strong. The homer gave the Yankees a 2-0 lead, and a few batters later Ellsbury poked an opposite field double down the line that scored Gardner all the way from first for a 3-0 lead. The ball hit the chalk. It was barely fair.

The team’s fourth run came in the third inning, after back-to-back-to-back singles by Didi Gregorius, Starlin Castro, and McCann loaded the bases with no outs. Headley drove in a run with a long sac fly to center, but Volquez was able to strike out both Judge and Tyler Austin (on changeups) to escape the jam. That was a missed opportunity. The Yankees were up 4-0, but they put eleven guys on base in Volquez’s 3.1 innings, and it felt like they should have scored more.

Only Five From Tanaka
Masahiro Tanaka made two bad pitches Tuesday, and they resulted in seven total bases. He hung a slider to Jarrod Dyson in the third inning that went for an RBI triple — Raul Mondesi singled up the middle earlier in the inning — and he hung a slider to Kendrys Morales in the fourth inning that went for a solo homer. Two very hittable pitches and Tanaka paid the price. That happens in the show.

Aside from that, Tanaka was pretty nasty. He allowed four hits in his five innings of work and of course he didn’t walk anyone. Tanaka never walks anyone. He faced 150 batters in August and walked one. That’s a 0.7% walk rate. Tanaka threw only 71 pitches in his five innings, so he had plenty left in the tank, but the skies opened up and the game was delayed 59 minutes by rain. That was that for Tanaka. Joe Girardi wasn’t going to send his ace back out after the delay. The Yankees had to go to their bullpen much earlier than expected. Groan.

Pain After The Rain
Rain delays have not been kind to the Yankees this season. They had that nightmare ninth inning rain delay game against the Rangers a few weeks back, when Kirby Yates blew a save because the delay forced Aroldis Chapman from the game, and then they blew that 6-0 lead against the Blue Jays two weeks ago. There was another blown save at Camden Yards after a rain delay earlier this year too. Bad year for rain delays.

Right away, you could tell things were not going to go the Yankees way. Austin walked and Gardner doubled to start the sixth inning after the delay, but the 2-3-4 hitters could not get a run in. Forget two runs, they couldn’t even score one. The Royals immediately answered with a run in the bottom of the sixth to cut the lead to 4-3. An infield single and a double did the trick against Adam Warren. Salvador Perez hit into a 5-4-3 double play to strand the tying run at third.

Tyler Clippard did some hero work getting that inning-ending double play in the sixth and pitching a scoreless seventh as well. The Yankees were up 4-3 after seven innings and it looked like Dellin Betances was all set up for the six-out save, and why not? He routinely went two innings as a setup man and had the last six days off. Betances hadn’t pitched since last Wednesday. There was no reason he couldn’t get six outs.

And yet, there was Clippard to start the eighth inning in the rain against the middle of the order with 1.2 innings worth of fatigue on his arm. And sure enough, he walked Lorenzo Cain, the leadoff hitter. Then Girardi went to Betances for the six-out save. Why not bring him in to start the inning if you’re willing to use him for six outs? It makes no sense. None. It never does and yet Girardi goes batter-to-batter all the time. Argh.

So anyway, Cain predictably stole second because Betances can’t hold runners. That was the other problem with the leadoff walk. It put a speedy runner on base. Gary Sanchez’s throw was right on the money, but Gregorius couldn’t handle the short hop and the ball scooted into center field, allowing Cain to take third. Morales drove in Cain with a sac fly. The four-run lead was officially blown.

Against All Odds, A Win
This game came down to the Yankees coming through when no one expected them to and the Royals not coming through whenever everyone expected them to. The Yankees took the lead after very nearly blowing a bases loaded situation in the top of the tenth. McCann and Headley started the inning with singles, but Judge and Austin struck out — the veteran Joakim Soria pitched backwards and picked the two kids apart — to put the rally in danger.

Gardner came up and had the best at-bat of the game, I thought. Soria jumped ahead in the count 0-2, but Gardner hung in there, worked the count full, then took ball four to load the bases. That left it up to Ellsbury, who lined a single literally off Soria. It deflected off Soria and away from the infielders just long enough to allow Ellsbury to reach first and pinch-runner Aaron Hicks to cross the plate. The Yankees again had the lead, this time 5-4.

Rather than send Betances out for a third inning — he’d thrown out 22 pitches, which is often one inning of work for him — Girardi went to the rookie Ben Heller for the save chance. It did not do well. Heller started the inning by hitting Mondesi, the No. 9 hitter, with a slider in the foot in a two-strike count. Dyson followed with a single to put men on the corners, and of course Dyson then stole second to give the Royals runners on second and third with no outs. Not good!

Heller rebounded by striking out Cain on a hanging slider. It was the worst slider he threw the entire at-bat. He threw a nasty slider that caught the corner for a called strike, and another one that was just off the plate that went for a ball. The hanger? Swung through for strike three. Go figure. Heller was ordered to intentional walk Eric Hosmer to put the force at any base, then he gave way to the just called up Chasen Shreve. Okie dokie.

Shreve threw Morales one strike and still managed to strike him out on three pitches. His first pitch was a fastball that missed by the full width of the plate. Sanchez set up outside and the pitch sailed inside, though it still caught the corner for strike done. Shreve got a favorable strike two call on an outside fastball, then buried a splitter in the dirt for a swing and a miss and strike three. Best splitter Shreve has thrown all year. Maybe since before last September’s meltdown.

The Yankees weren’t out of the woods yet. The Royals still had the bases loaded with two outs, and Perez was at the plate. And despite the strikeout of Morales, I’m not sure anyone felt comfortable with Shreve on the mound. No worries though, Chasen executed a good 0-1 splitter just off the plate, which Perez chased and popped up to center for a harmless game-ending fly out. Chasen Shreve: Proven Closer. Never in doubt. (It was very much in doubt.)

Leftovers
The Yankees eked out the win despite going 2-for-16 (.125) with runners in scoring position. One of those hits didn’t even score a run. The Yankees specialize at those, the hits with runners in scoring position that don’t actually score a run. The other hit was the Ellsbury infield single off Soria in the tenth inning. A win is a win, but man, this one will not go on the RISP highlight reel.

Phenomenal games by Gardner and Ellsbury. Ellsbury went 4-for-6 and drove in two runs, including the winning run. Gardner went 2-for-3 with three walks, and he also made two great defensive plays back-to-back in the fifth. He threw out Alcides Escobar trying to stretch a single into a double, the made a great running catch near the corner to take extra bases away from Christian Colon. Great games by those two.

The Yankees had 14 hits as a team. Ellsbury had four, Gardner at two, and McCann had three. Every starter had at least one except Austin. Austin did draw a walk though, so he managed to reach base for the seventh time as a big leaguer. It was his first career walk. Eighteen baserunners in ten innings, but only five runs. Sigh. Whatever. They won.

And finally, I think it’s pretty cool the kids are playing big roles in these important late season games. Judge homered, Heller was out there for the save, Sanchez was calling the shots behind the plate … these are good learning experiences. Even the failures. You can learn more from failure than you can success.

Box Score, WPA Graph & Standings
ESPN has both the box score and updated standings while MLB.com is the place to go for the video highlights. We have Bullpen Workload and Announcer Standings pages. The Yankees are still 3.5 games back of the Orioles for the second wildcard spot. They go to Baltimore for three games this weekend, you know. Here’s the cardiac win probability graph:

DotF: Molina homers twice in Pulaski's win
The Pros and Cons of Putting Luis Severino in the Bullpen