For the first time since 1990, the Yankees have been swept in a four-game series at Fenway Park. They dropped their fifth straight game Sunday night, this one by the score of 5-4. The Yankees held at least a three-run lead in three of the four losses to the Red Sox. Completely outclassed all weekend, both the players and the manager.

Four Runs In Four Innings
On paper, the Yankees used their worst lineup of the season Sunday night. They were short several key players due to injury, which is why Ronald Torreyes was hitting second and Donovan Solano was in the lineup at all after spending the entire season with Triple-A Scranton. It didn’t look great going into the game, so, naturally, the Yankees scored four runs in the first four innings and chased Drew Pomeranz after eleven outs.

The first inning rally nearly died an unceremonious death. Brett Gardner led the game off with a double to right, but Torreyes and Gary Sanchez followed with strikeouts, meaning the stranding of Gardner was imminent. Cleanup man Billy Butler — that is definitely not something I expected to write this season — worked a two-out walk, and Didi Gregorius came through with a run-scoring single to right to give the Yankees a 1-0 lead. The leadoff double wasn’t wasted.

After a 1-2-3 second inning, the Yankees scored a run in the third inning the way they seem to score most of their runs these days: Sanchez knocked the crap out of a baseball for a home run. Pomeranz gave him a first pitch heater over the plate and Gary hit it like he knew it was coming. John Sterling didn’t have time for anything more than, “It is high! … ” before the ball cleared the Green Monster for a 2-0 lead. Rocket.

The Yankees scored their next two runs in the fourth inning, when they managed to load the bases and plate two runs while hitting one (1) ball out of the infield. That was Mason Williams’ opposite field double. It was a really nice at-bat. He fell behind a tough lefty 1-2, worked the count back full, then shot the ball into the left-center gap. Williams hustled into second base and slid in just ahead of the tag. Love it. He waited a long time to get back to the big leagues following shoulder surgery.

A Solano infield single and a Rob Refsnyder walk were sandwiched around the double to load the bases with no outs. The first run scored on Gardner’s ground ball thanks to Refsnyder’s baserunning. It was a soft grounder to second, but Refsnyder stopped and backed up before being tagged, allowing Gardner to reach first. The second run scored on a Torreyes ground ball to third. Aaron Hill fielded it and threw to second, at which point Williams took off for home and beat the throw to the plate for a 4-0 lead. Love the aggressive baserunning. Two nice slides too.

The Inexplicably Long Leash
Joe Girardi has had a very long leash with CC Sabathia this season, an undeservedly long leash, and it’s come back to bite the Yankees more times than I care to count. His numbers the third time through the order and once his pitch climbs over 75 are abysmal. Girardi again ignored both trends Sunday and it predictably cost the Yankees yet another multi-run lead. They blew a few of those this series.

Sabathia battled through four scoreless innings and had a 4-0 lead to start the fifth inning, a fifth inning that began when third string catcher Bryan Holaday smashed a near home run off the wall in center field. It was close enough to a homer that a fan reached over and the play had to be reviewed. After walking Xander Bogaerts on five pitches with one out, Sabathia very nearly escaped the inning on a Mookie Betts line drive.

The line drive found Sabathia — he threw his glove up and caught it, all luck — and he tossed to first to double off the runner, but the throw was a little wide of the bag and the human-sized big toe the Yankees started at first base couldn’t reel it in. It was not a good throw to first at all, but I feel like most non-Butler first baseman make the catch and at least stop it from going into foul territory and allowing the runners to advance. Alas.

As expected, the error came back to bite the Yankees. Sabathia was facing the molten hot Hanley Ramirez a third time and his pitch count was approaching the century mark. After falling behind Hanley in the count 3-1, Sabathia missed a little out over the plate with a slider and Ramirez Sanchez’d it over the Monster for a three-run home run. The Betts line drive was nearly an inning-ending double play that would have given the Yankees a 4-0 lead after five. Instead, it was 4-3.

But wait! Sabathia was not done. With his pitch counting sitting at 101, Girardi sent the big man back to the mound to get the left-on-left matchup against not only Travis Shaw, but also Jackie Bradley Jr., apparently. That happened even though a) Sabathia’s pitch count was over 100, b) three of the last five batters hit rockets, and c) there are approximately 37 lefty relievers in the bullpen. Single, single, single, game tied. So predictable.

Blake Parker inherited runners on first and second with no outs and miraculously escaped despite facing David Ortiz (three-pitch strikeout!), Dustin Pedroia (fielder’s choice), and Bogaerts (strikeout). Sabathia’s final line: 5 IP, 8 H, 4 R, 1 ER, 3 BB, 5 K. It could have been 5 IP, 4 H, 0 R, 0 ER, 3 BB, 5 K without the error, but alas. Six of the final nine batters he faced reached and they weren’t bloop singles or grounders with eyes. Not reason for Sabathia to be out there in the sixth.

The Inevitable Loss
Following that heartbreaker Thursday night, it felt like the Yankees were losing all series even when they had the lead. As soon as the Red Sox tied things up in the sixth, it was only a matter of time until they took the lead, and if the Yankees were lucky, it would only be a one-run lead. The inevitable go-ahead home run came in the seventh, when Tyler Clippard hung the hell out of a changeup … 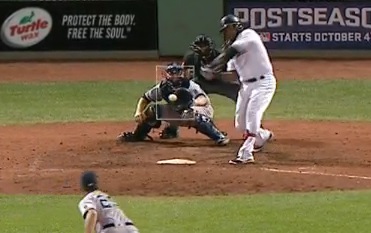 … to Ramirez, who hit his fourth home run of the series. He went 9-for-16 (.563) with four homers, one walk, and zero strikeouts in four games. He drove in nine runs in the series. Hanley absolutely demolished the Yankees. Man against boys. It was only a matter of time until Clippard allowed a home run — he came into the game with a 0.47 HR/9 with the Yankees and a career 1.06 HR/9 — and he threw a bad pitch to a hot hitter. So it goes.

Leftovers
Sanchez went 3-for-5 with a normal single, a loud single off the Monster, and the home run. It was his 16th homer of the season. He’s the first Yankees rookie with 16 homers since Hideki Matsui in 2003, and Matsui wasn’t really a rookie. He was an experienced veteran from overseas. The last true rookie to hit 16+ homers in pinstripes was Alfonso Soriano. He hit 18 in 2001.

Gregorius and Williams were the only other Yankees with multiple hits and they had two each. Gardner, Butler, McCann, and Solano had base knocks as well. Butler and Refsnyder drew the only walks. The Yankees went 1-for-8 with runners in scoring position but that’s a bit deceiving because they had some productive outs to score runs in that fourth inning. Whatevs.

And finally, the Orioles, Tigers, and Mariners all won earlier on Sunday while the Blue Jays and Astros lost. Here are the wildcard standings with a mere 13 games to play:

That … could be worse?

Box Score, WPA Graph & Standings
Head on over to ESPN for both the box score and updated standings. MLB.com is the place to go for the video highlights. Here are our Bullpen Workload and Announcer Standings pages, and here’s yet another win-turned-loss probability graph:

Up Next
This nightmare of a series is finally over. The Yankees have an off-day Monday and thank the baseball gods for that. Not sure I want to sit through another night of this nonsense. The Yankees will be in Tampa for a three-game set against the last place Rays next. Michael Pineda and lefty Drew Smyly are the scheduled starters for Tuesday night’s opener.