River Ave. Blues » Sabathia dominates, Yankees turn to the long ball in 3-0 win over Dodgers
DotF: Scranton, Trenton drop Game One of Championship Series
Refsnyder and Williams are the Yankees' best options in the wake of the Judge injury

Now that’s more like it. After dropping back-to-back games the last two days, the Yankees rebounded with an emphatic win Tuesday night, reminding everyone they are still in the damn postseason race. The Yankees beat the Dodgers by the score of 3-0 in the middle game of the three-game series. The Orioles won and the Tigers lost, so the Yankees are now tied with Detroit in the standings and two games back of the O’s for the second wildcard spot.

World Champ
Last time out, CC Sabathia looked like a total wreck. He was laboring right from the start of the first inning and there was nothing on his pitches at all. I wrote in that night’s recap that Sabathia almost seemed to be pitching hurt. He looked that bad. Fast forward to this game and Sabathia looked far better, with jump on his fastball and conviction in his delivery. He looked better than good. Sabathia was as good as we’ve seen him at any point this season.

The Dodgers had their best chance to score against Sabathia in the second inning, after Enrique Hernandez ripped a two-out double to left field and advanced to third on a passed ball. Sabathia ended the threat with a quick three-pitch strikeout of former Yankees farmhand Rob Segedin. Following the Hernandez double, Sabathia retired nine straight and 14 of the final 16 batters he faced. He didn’t allow another runner to make it as far as second base.

Sabathia has been shakier and shakier as his pitch count climbs this season, particularly once he gets over 75-80 pitches or so. He held the Dodgers scoreless over the first five innings, but his pitch count was at 73, and he was about to face the top of the lineup a third time. That’s usually the danger zone. Joe Girardi sent Sabathia out for the sixth — no one was warming in the bullpen — and while he gave up a hard-hit one-out single to Justin Turner, CC finished the sixth with the 0-0 tie intact.

Sabathia started the seventh to get the left-on-left matchup against Adrian Gonzalez, and after getting him to roll over on a ground ball, he was replaced by Adam Warren. I was pleased. I thought this was one of those batter-to-batter situations. Sabathia finished the night with three hits and one walk allowed in 6.1 innings. He struck out seven and impressively allowed only two fly ball outs against ten on the ground. Well done, CC. You’re still a BAMF.

Power Off The Bench
Dodgers rookie lefty Julio Urias showed a lot of things Tuesday night. He showed some nasty stuff first of all, regularly hitting 96+ mph. He also showed a lot of pitching know-how by fooling hitters with a few 2-0 and 3-1 changeups. And Urias also showed a decided lack of efficiency; he threw 78 pitches to 17 batters in 3.2 innings. That’s 4.59 pitches per batter and 21.3 per inning. Yikes.

Incredibly — and annoyingly — six of the final nine hitters Urias faced reached base, yet the Yankees failed to score a run. They stranded two runners in the third and the bases loaded in the fourth. There was a double play mixed in there as well. Blah. Aaron Judge’s two-out walk in the fourth inning was the last batter Urias faced. Righty specialist Louis Coleman came in and got contact machine Ronald Torreyes to ground out to short with the sacks full. Alas.

Judge’s walk was his final at-bat of the night. He hurt his oblique taking a swing during that at-bat and was removed from the game after the inning. He’ll go for an MRI tomorrow. Sucks. Jacoby Ellsbury replaced Judge in the lineup — he took over in center, Brett Gardner went to left, and Rob Refsnyder slid over to right — and his only at-bat of the game was rather huge.

With the game scoreless in the seventh inning, Ellsbury came to the plate for the first time with one out. Rowdy Ross Stripling was on the mound for his second inning of work, and Ellsbury worked a really great at-bat. Fell behind in the count 0-2, worked it back full, and fouled off three two-strike pitches. The ninth pitch of the at-bat was a hanger and a half. Check it out:

That is one aesthetically pleasing home run. You can see Ellsbury read hanger out of Stripling’s hand, wait back for it to arrive at the plate, then unload for the tie-breaking solo home run into the second deck. Perfect. I’ve given Ellsbury a lot of crap this year (and last year … and the year before that) but he’s been really good the last three weeks or so. Coming on at just the right time.

I don’t know about you, but one run felt like it was enough to win this game. Thankfully Didi Gregorius did not share that sentiment and followed Ellsbury’s home run with a solo homer of his own. It was a pinch-hit dinger on a flat fastball up in the zone. Another mistake pitch. Neither Ellsbury nor Gregorius started Tuesday’s game, yet they came off the bench to give the Yankees a 2-0 lead with back-to-back solo homers in the seventh.

One run felt like enough to win and two runs felt like plenty. What did three runs feel like? I dunno. Pretty good, I know that much. Gary Sanchez hit New York’s third solo dinger of the night in the eighth inning, this one against veteran Jesse Chavez. Look at the pitch location: 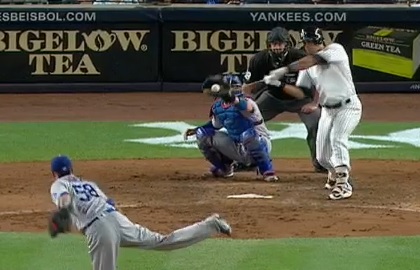 That ridiculous. You’re not supposed to be able to hit that out of the park. Sanchez muscled the high and outside pitch over the right field wall for his 14th homer of the season and third in the last five games. He hasn’t been picking up as many non-home run hits lately, but man, when he connects, the ball goes an awfully long way. Sanchez has 24 home runs in 107 total games this season between Triple-A and MLB. As a full-time catcher. That’ll do.

Shutdown Bullpen
The Yankees haven’t gotten much length from their starters recently, but with Sabathia taking the ball into the seventh inning, Girardi was able to go right to his end-game relievers. Warren got two quick outs to close out the seventh, then after Tyler Clippard allowed a dinky two-out single to Howie Kendrick in the eighth, Dellin Betances entered for the four out save. His only blemish was a leadoff Corey Seager single in the ninth. It deflected off Mark Teixeira’s glove at first base and away from Starlin Castro. What can you do?

Following Hernandez’s double in the second, the Dodgers did not have another runner reach second base until the ninth inning, when Seager took second on defensive indifference. Just a phenomenal job by all four pitchers. They held the Dodgers to one double, four singles, and one walk in nine innings. They struck out ten. Thirty-three Dodgers came to the plate and nine hit the ball out of the infield. Nine!

Leftovers
It didn’t seem like it — I guess because the game was scoreless into the seventh inning — but the Yankees had 13 baserunners in eight offensive innings. Eight hits, four walks, and a hit batsman. Castro led the way with three hits. Brian McCann was the only other Yankee to reach base twice; he walked and was grazed by a pitch.

The Yankees went 0-for-2 with runners in scoring position. I wonder how many games they’ve won with so few at-bats with men on second and/or third? Power hitters are pretty cool. When you can hit dingers, there’s a runner in scoring position even when the bases are empty. The Bronx Bombers came through big Tuesday.

And finally, the Yankees have a new wrestling style championship belt in the clubhouse, and before the game Gregorius said they plan to give it to the player of the game after each win. Sabathia earned the first title belt after his performance in this game, hence the “World Champ” section title earlier. Check it out (via Didi on Twitter): 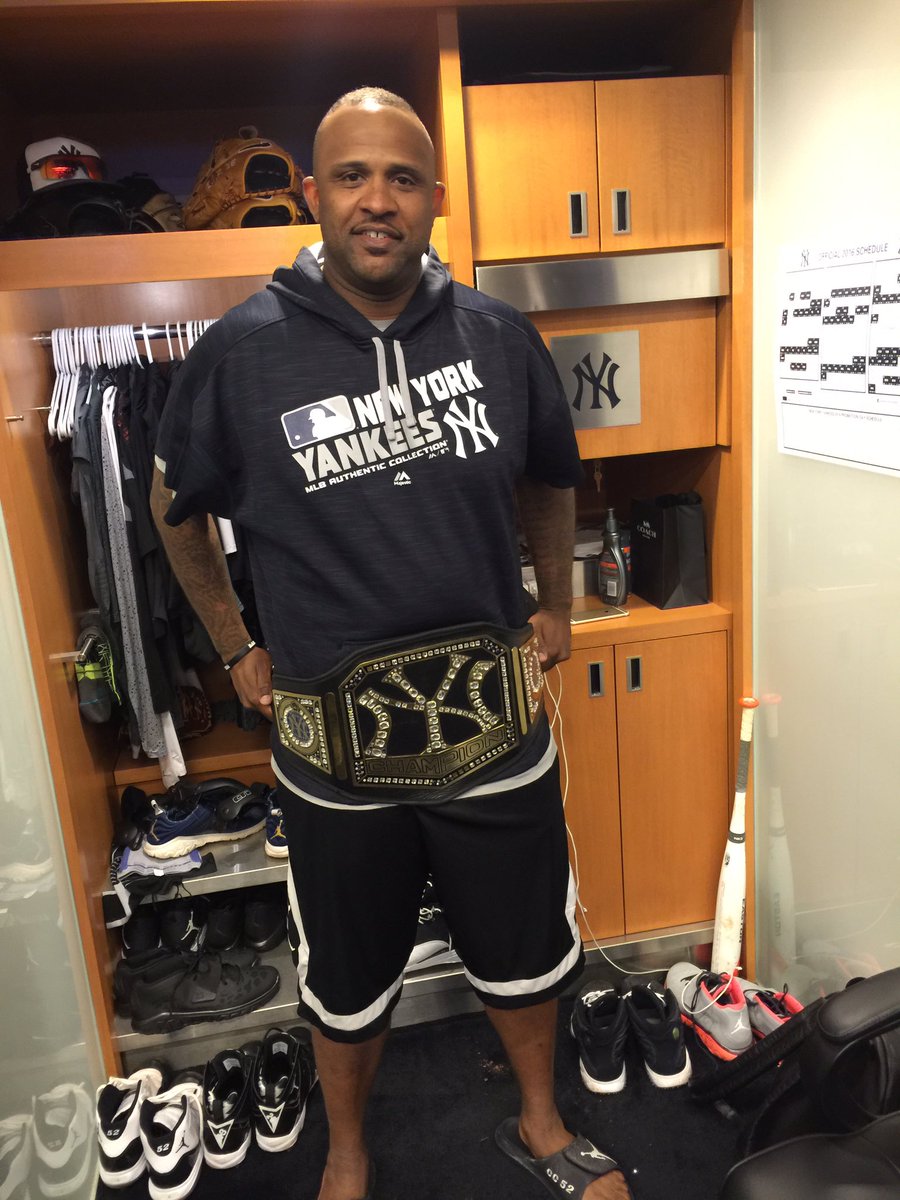 If you’re down with the Yankees giving out a title belt after wins, gimme a hell yeah.

Box Score, WPA Graph & Standings
Go to ESPN for the box score, MLB.com for the video highlights, and ESPN for the updated standings. Make sure you don’t miss out Bullpen Workload and Announcer Standings as well. Here’s the very excellent win probability graph:

Up Next
The Yankees close out the non-AL East portion of their schedule with the series finale against the Dodgers tomorrow. Michael Pineda and some guy named Clayton Kershaw will be on the mound. RAB Tickets can get you in the door for that game or any of the other six (six!) home games left in 2016.

DotF: Scranton, Trenton drop Game One of Championship Series
Refsnyder and Williams are the Yankees' best options in the wake of the Judge injury