No relief
In a season defined by so many improbable wins and stunning comebacks, the Yankees fell just short of adding another one on Friday night, falling 5-4 to the Rays. It was just the Yankees’ fifth loss this season when holding a lead at any point in the game, the fewest in the AL and second-fewest in the majors behind the Rockies (3) after Friday’s slate.

Luis Severino struggled early but gave the Yankees five solid innings and a chance to win the game, exiting with a 2-1 lead. He threw 30 pitches in the first inning and 59 in the next four frames, allowing just one run on five hits while striking out seven.

Severino’s slider was in peak form, generating a career-high 11 whiffs on 24 swings (45.8%) among the 42 sliders he threw. The pitch netted him four of his seven strikeouts and four of his five groundball outs, as he mostly buried it at the knees while also mixing in a few swing-and-miss sliders up in the zone: 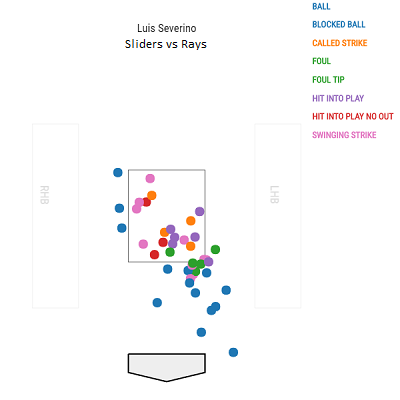 His slider has emerged as one of the nastiest in baseball this season. The pitch has been responsible for a total of 36 strikeouts and 25 groundball outs in 2017; both of those numbers were the second-most among all pitchers through Friday, trailing only Chris Archer (48 strikeouts, 36 groundball outs).

Severino’s gutsy performance was wasted, though, as the bullpen imploded and blew the lead late. The Rays’ rally was capped by a tie-breaking RBI single in the eighth inning off the bat of notable Yankee killer, Evan Longoria. Friend of Yankeemetrics, Mark Simon, tells us that it was Longoria’s 13th career game-winning RBI against the Yankees, which is the most among active players.

Before Longoria’s hit, it looked like Matt Holliday might wear the hero’s cape. His two-run homer in the top of the eighth knotted the game at 4-4, and was his first game-tying homer in the eighth inning or later in more than seven years (April 11, 2010 vs. Brewers).

Even more impressive is that the pitch he crushed was a 100-mph fastball from Ryan Stanek, the fastest pitch hit out of the ballpark by any player this season. Prior to the at-bat, Holliday was just 2-for-10 (.200) with three strikeouts in at-bats ending in a 100-plus-mph pitch dating back to 2008.

Tanaka The Terrible
There is no sugarcoating the fact that Saturday’s loss might have been the ugliest of the season. The numerous ejections, the beanball war that erupted in the late innings and the glacial pace of the game were mere footnotes in what has easily become the Yankees biggest worry of the season:

Tanaka was clobbered yet again, giving up three homers and six runs before getting pulled with no outs in the fourth inning. This disaster performance somehow was an improvement statistically on his last start a week ago against the Astros, when he gave up even more runs (8) and homers (4) and pitched fewer innings (1 2/3).

That string of back-to-back train wreck outings put him in ignominious company: he is the only pitcher in Yankee history to allow at least six earned runs and three homers in consecutive games while getting fewer than 10 outs in each game. In fact the only other player in major-league history to do that was Mike Lincoln for the Twins in 2000.

Any way you slice it, his recent numbers are awful:

One of the few highlights was yet another dinger by Aaron Judge, his league-leading 15th of the season. He is one of five Yankees to hit at least 15 homers in the team’s first 40 games, joining this exclusive group of sluggers: A-Rod (2007), Tino Martinez (1997), Mickey Mantle (1956) and Babe Ruth (four times).

Strikeouts are overrated
The Yankees avoided the sweep and snapped their three-game losing streak with a 3-2 win on Sunday. Despite the Yankee victory, the Rays remain the only AL team with a winning record against the Yankees since 2010 (71-68).

Brett Gardner delivered the game-clinching blast with his tie-breaking two-run homer in the second inning. It was his eighth longball of the season, surpassing the number he put over the fence all of last year (in 148 games and 634 plate appearances). All eight of his homers have come since April 29; the only player with homers in that span is Dodgers rookie Cody Bellinger (9).

They overcame a whopping 17 strikeouts, tying the franchise record for a nine-inning game, done three times previously, including once already this season (3-2 win over St. Louis on April 15). They are the only team in major-league history to win two nine-inning games when striking out at least 17 times in a single season.

The heart of the order — 3-4-5 batters — were the biggest culprits, fanning 11 times in 12 at-bats. Matt Holliday and Aaron Judge were both 0-for-4 with four Ks, becoming the first set of Yankee teammates to whiff four-plus times in a non-extra-inning game. This was also the first time in any game (regardless of innings) that the Yankees had two players go hitless and strike out at least four times.

Judge redeemed himself in the field, with a spectacular game-saving catch and double play, robbing Evan Longoria of extra bases with a man on in the sixth inning.

Entering the day, Judge ranked second in the majors in Defensive Runs Saved (6) among rightfielders behind the Cubs’ Jason Heyward (7).