Welcome back, Masa-Hero
Friday’s game may have been a 4-1 loss in the standings, but it was a victory in the minds and eyes of the Yankees and their fans thanks to the spectacular performance by Masahiro Tanaka.

Tanaka looked like an ace again as he mowed down Oakland’s lineup, dominating them with his devastating signature splitter/slider combo. He set career-highs in strikeouts (13) and swinging strikes (26), displaying the top-of-rotation stuff that had been missing in the first month and a half of the season.

The 26 swings-and-misses were the second-most by any Yankee pitcher in the past decade, one shy of the 27 that CC Sabathia got on June 7, 2012 against the Rays. Each of the 13 punchouts were via a strike-three whiff, matching Sabathia (June 30, 2012 vs. Brewers) for the most swinging strikeouts in a game by any Yankee pitcher over the last 10 years.

Eight of the 13 strikeouts came on his sharp, late-breaking slider, and the other five were on filthy splitters that dropped out of the zone: 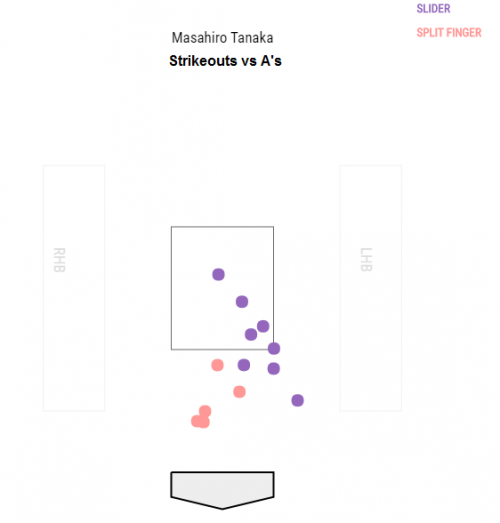 The improved depth of his splitter was one of the biggest keys to Tanaka’s domination on Friday night. He threw 25 splitters and located those pitches an average of 1.82 feet below the middle of the strike zone. That was his lowest vertical location for the splitter in any game this season, netting him 10 whiffs and silly swings like this one from Ryon Healy in the seventh inning:

So that was the good news from Friday night.

Unfortunately, there was some bad news too. The Yankee bats went cold once again and the bullpen suffered another inexplicable meltdown, allowing three runs plus an inherited runner to score. Tanaka’s final line of 7 1/3 innings, 13 strikeouts, no walks and one run made him not only a hard-luck loser, but also etched his name in the record books.

It was just the third time a Yankee pitcher struck out at least 13 batters in a game and got the loss. The other two were done by Roger Clemens: June 17, 1999 against the Rangers and May 28, 2000 against the Red Sox in an epic duel with Pedro Martinez.

Even more incredible is this #FunFact: Tanaka is the first pitcher in Yankee history to get the loss in a game where he had at least 13 strikeouts, no more than one run allowed and zero walks.

Two close for comfort
Thanks a third straight solid outing by CC Sabathia and justenough offense, the Yankees bounced back to win the middle game of this three-game series, 3-2.

This was only the second time in the last 60 seasons that the Yankees won a game in the Bronx with no more than two hits. It also happened on Sept. 9, 1988, when Claudell Washington hit a walk-off homer to beat the Tigers (the other hit was a Rickey Henderson triple in sixth inning).

The decisive blow on Saturday was delivered by Matt Holliday, who ended Jharel Cotton’s no-hit bid and broke a 1-1 tie in the sixth inning with one swing of the bat, crushing a two-run homer to left. It was his ninth homer of the season and team-best sixth dinger that either gave the Yankees a lead or tied the game.

Sabathia pitched into the seventh inning, allowing two runs while striking out a season-high nine batters. Four of the nine strikeouts — including three that were looking — came with his slider, which has routinely frozen hitters this season. He’s gotten called strikes on 23.2 percent of his sliders thrown, the fourth-best rate among starters (min. 100 pitches).

Dellin Betances was the end-of-game hero as he escaped a second-and-third, one-out jam in the eighth inning by striking out the next two batters, and then easily retired all three guys he faced in the ninth. The last Yankee to inherit at least two baserunners and get a perfect save of at least five outs? Mariano Rivera on April 23, 2008 vs. the White Sox.

Your Honor, the Grand Jury is in session
The Bronx Bombers returned to form on Sunday afternoon in 9-5, series-clinching win that pushed their AL East lead to a season-high three games. This is just the fourth time in the Wild Card era that the Yankees have entered play on Memorial Day in sole possession of first place in the division. The other three times it happened – 1996, 1998, 2001 – they made the World Series and won it twice.

On the mound, Michael Pineda struggled with his command (season-high three walks) but showed his toughness in limiting the A’s to three runs in six innings. It was his ninth straight start allowing three earned runs or fewer, one shy of the longest streak by an AL pitcher this season (both Michael Fulmer and Derek Holland have 10-start streaks).

Aaron Judge provided the power with his first career grand slam in the third inning to turn a 2-1 deficit into a 5-2 lead. He was the first Yankee right-fielder to go yard with the bases loaded against the A’s since Paul O’Neill on April 5, 1997. And the 25-year-old slugger is the youngest Yankee to hit a grand slam at Yankee Stadium since Nick Johnson (24 years old) on Aug. 8, 2003 vs. Mariners.