River Ave. Blues » Yankeemetrics: Camden Yards, House of Horrors (May 29-31)
The Yankees and their uncanny ability to get opposing hitters to chase out of the zone
6/1 to 6/4 Series Preview: Toronto Blue Jays

The Full Monty
The Orioles entered this week on a seven-game losing streak and playing their worst baseball of the season. Yet they were probably happy to see the Yankees coming to town given their recent run of success in Baltimore against their division rival.

After the 3-2 loss on Memorial Day, the Yankees dropped to a miserable 8-23 at Camden Yards since 2014, the second-worst mark at the ballpark among all American League teams over the past four seasons; only the Indians (2-8) have been worse.

Jordan Montgomery struggled early, needing 34 pitches to navigate the first inning, and that inefficiency foreshadowed the rest of his labored performance. He consistently fell behind hitters and got into deep counts, reaching a full count on seven (!) of 23 batters. That’s the most full counts faced by any Yankee pitcher this season – and he did it while pitching only 4 1/3 innings.

The lone offensive highlight came from the bat of – no surprise – Aaron Judge, who sent a screaming line drive into the center field seats in the seventh inning. It was Judge’s 17th blast of the season as he moved into first place on the MLB home run leaderboard.

Bald Bombers
The Yankees got their offensive mojo back on Tuesday as they pounded out 14 hits and hammered the Orioles, 8-3. It was their 15th game scoring eight-or-more runs, the most in the AL and tied with the Rockies for the MLB lead entering Wednesday. The last season that the Yankees scored eight-plus runs this many times before their 50th game was 1998, a pretty good year if we remember correctly.

Four of the 14 hits left the ballpark, with Brett Gardner and Matt Holliday each going deep twice. Those were the 10th and 11th homers of the season for both guys, making the Yankees the first AL team this season to have three players reach double-digit homers.

For Gardner, it was his third game with at least two homers this season – which somehow gave him the most multi-homer games among all AL players through Tuesday. He also became just the third player in franchise history to have three or more multi-homer games while hitting out of the leadoff spot, joining Alfonso Soriano (2002) and Bobby Bonds (1975).

Holliday’s two-homer night was less surprising but still put his name on a fun list of Yankee designated hitters to hit two-plus homers in at Camden Yards: Gary Sheffield (2005), Jason Giambi (2002) and Darryl Strawberry (1996) are the others.

Gardner and Holliday were the first Yankee teammates to homer twice in the same game since … May 2 when Gardner and Judge each went deep twice against the Blue Jays. Over the last 60 years, there’s been just one other season in which the Yankees had two games where two players hit multiple homers: 2005.

Luis Severino continued to make his case as the early-season ace of the staff, lowering his ERA to 2.93. He scattered seven singles over 6 1/3 innings, and most of those hits were weak grounders that never left the dirt or somehow found holes through the infield. The average exit velocity on batted balls against Severino was 82.4 mph, the lowest mark for any start in his career. As you can see in this batted ball spray chart from Tuesday’s start, there’s a ton of blue (low exit velocity) and barely any red (high exit velocity): 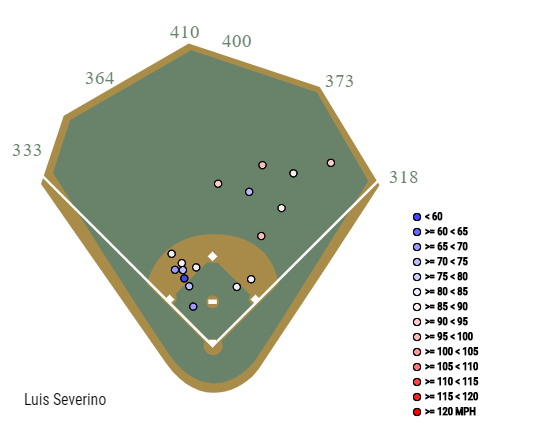 Following his gem against the Orioles, Severino has five starts with no more than one earned run allowed while striking out at least six batters. The only other pitchers in the majors to have five such starts (through Tuesday) were Clayton Kershaw, Zack Greinke, Robbie Ray, Ervin Santana and Dallas Keuchel.

Deja Vu, Terrible Tanaka
Camden Yards, once known as Yankee Stadium South, has officially become a House of Horrors for the team up north. The Yankees have lost 11 straight series at the ballpark after getting blown out by the O’s on Wednesday night. That’s the second-longest road series losing skid against any opponent in franchise history, behind only a 12-series streak at Oakland from 1985-91.

How long has it been since the Yankees celebrated a series win in the Charm City? The last time Yankees won a series at Camden Yards, Mariano Rivera was the winning pitcher in the series-clinching game on September 12, 2013.

The Orioles broke the game open with a four-run third inning, though Masahiro Tanaka did reach a milestone in that ugly frame. He whiffed Manny Machado on a slider for the second out, the 500th career strikeout of his career. Tanaka is the fifth Yankee to reach 500 Ks within his first four major-league seasons, a group that includes Andy Pettitte, Lefty Gomez, Orlando Hernandez and Mel Stottlemyre.

That was the lone highlight for Tanaka, who got shelled for seven runs on nine hits before exiting in the sixth inning. It was the third time in 11 starts this season he allowed at least seven earned runs; in his first three major-league campaigns, spanning 75 starts, he never gave up more than six earned runs in any outing.

This awful performance capped a miserable month of May for Tanaka: six starts, 8.42 ERA, 11 HR, 48 hits, 31 innings pitched. The most glaring number from that mess is the 11 homers, which ties the most ever by a Yankee pitcher in a calendar month. The good news is that the guy he matched is named Ron Guidry (September 1985). The bad news is that he allowed 11 freaking home runs in 31 innings. Welp.

The Yankees and their uncanny ability to get opposing hitters to chase out of the zone
6/1 to 6/4 Series Preview: Toronto Blue Jays