River Ave. Blues » Postseason Bound! Yankees clinch at least a wildcard spot with 5-1 win over Blue Jays
Game 154: A Win And They're In
Looking Ahead to the 2018 Roster

The Yankees are officially going back to the postseason. Saturday afternoon’s 5-1 win over the Blue Jays means the Yankees will be, at worst, the second wildcard team. The magic number to clinch homefield advantage in the Wild Card Game is just two. October baseball, I’ve missed you so.

Those double plays were the only reason Joe Biagini escaped with three runs allowed in five innings. The Yankees threatened in nearly every inning, yet it took them not hitting a ball into the field of play to score three runs. Headley drew a walk to start the fifth and stole second, then Starlin Castro worked a one-out walk to put two men on base. That’s when Greg Bird hit the go-ahead three-run home run.

Looking for run support? Greg Bird has you covered. pic.twitter.com/YwqdeKSLKJ

That made all those stupid bad luck double plays worth it. Well, no, they were still annoying as hell, but at least the Yankees scored some runs along the way. That was Bird’s third homer in his last seven games. His last six hits: home run, home run, double, single, double, home run. Would be nice to really get Bird going before the postseason.

Six Strong For Sonny
For the eighth time in his ten starts as a Yankee, Sonny Gray did not allow more than two earned runs Saturday afternoon. And for the seventh time in those ten starts, he completed six full innings, even though there seems to be this idea floating around that he’s been a five-and-fly pitcher. Gray did have to wiggle out of some jams Saturday, including out two runners on base in three of his six innings, though the only damage was a Teoscar Hernandez solo home run in the third.

Gray’s final line: 6 IP, 4 H, 1 R, 1 ER, 3 BB, 4 K on 96 pitches. I thought maybe he would start the seventh and do the batter-to-batter thing against the bottom of the lineup, but nope. Joe Girardi went to the bullpen with a chance to lock down a postseason spot. Two of Gray’s three walks went to two of the final five batters he faced. He walked Josh Donaldson to start the sixth and Kendrys Morales with one out to put the tying run on base, but a great Gardner running catch and a ground ball later, the inning was over. Solid. Unspectacular. Sonny.

Leftovers
Seven hits for the offense, the biggest of which was Bird’s dinger (duh). Frazier drove in an insurance run with a solo homer in the eighth, and Castro brought in another insurance run with an infield single in the ninth. Doubles for Judge and Gary Sanchez, homers for Bird and Frazier, and singles for Headley, Ellsbury, and Castro. Sanchez, Castro, Sanchez, and Headley (two) had the walks.

Nine up, nine down, four strikeouts for the bullpen. Chad Green had the seventh, David Robertson the eighth, and Aroldis Chapman the ninth. The Rogers Centre crowd gave Jose Bautista a huge standing ovation in the eighth inning as he plays what is likely his final home series as a Blue Jay. Robertson struck him out. Love it. Also, the final out to clinch a playoff spot? Rob Refsnyder. Perfect. Just perfect. 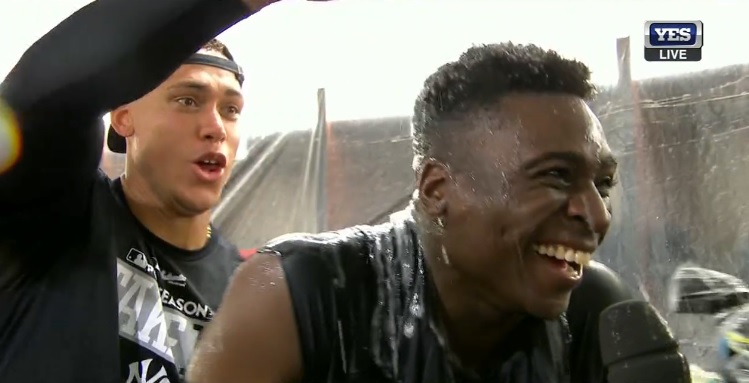 Box Score, WPA Graph & Standings
ESPN has the box score and updated standings, MLB.com has the video highlights, and FanGraphs has the postseason odds. Here’s our Bullpen Workload page and here’s the win probability graph: