Regardless of what happens the rest of the year, this has been an overwhelmingly positive season for the Yankees and their youth movement. Both Aaron Judge and Gary Sanchez emerged as bonafide middle of the order thumpers in their first full MLB seasons, and Luis Severino bounced back from a disappointing 2016 season to become a legitimate Cy Young candidate. He’s going to finish in the top five of the voting. Maybe top three.

What’s the difference between 2016 Severino and 2017 Severino? A lot of things, really. First and foremost, I think his command is so much better. Command is not something we can measure — walk rate is a control stat, not a command stat — it’s something we have to see. Based on my observations, Severino is doing a much better job locating on the edges of the plate, and just off the plate. He made a lot of middle-middle mistakes last year.

Second, confidence. Last season it appeared Severino got scared out of the strike zone at times, and a little fastball shy. And who could blame him? He was young and getting hit hard. This year he looks like a dominator on the mound. He’s oozing confidence and you can tell he knows he’s in command of the game. There is no doubt in my mind last year’s success out of the bullpen contributes to that. He took the bullpen mentality to the rotation.

And third, his changeup. Severino always had a quality changeup coming up through the minors. We saw it in 2015. Last year he didn’t have much success with the pitch, and as a result he basically stopped throwing it late in the year. Even when he moved back into the rotation. He’d throw one or two per start, maybe. Back in 2015 he threw 10-20 changeups per start. Last season he made eleven starts and threw double-digit changeups only five times.

This season Severino is again sitting the 10-20 changeup range, and he’s throwing more and more changeups as the season progresses. Heck, he threw 29 changeups in a game against the Red Sox back in July. That never would’ve happened last year. The thing that has caught my eye about Severino’s changeup, especially the last few weeks, is the velocity. Here is his changeup velocity by start with error bars showing the minimum and maximum velocities, via Brooks Baseball: 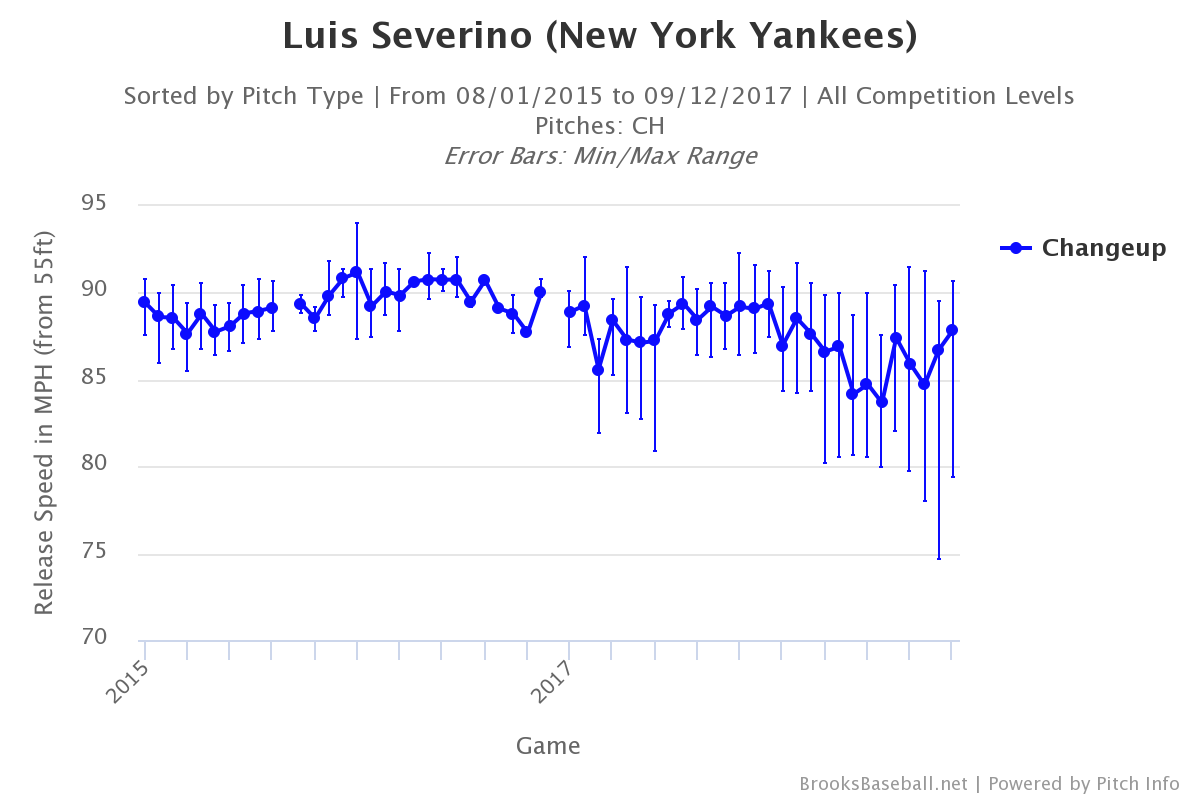 For all intents and purposes, Severino’s changeup velocity range was 85 mph to 92 mph from 2015-16. This year, as you can see from the error bars in the graph, he’s thrown his changeup down around 80 mph in several starts, with a few in the 70s as well. Look at his last few starts in particular. Severino has been throwing his changeup anywhere from 80 mph to 90 mph. Heck, Severino threw a 79.0 mph changeup and a 90.1 mph changeup in the same at-bat Saturday. From Baseball Savant: 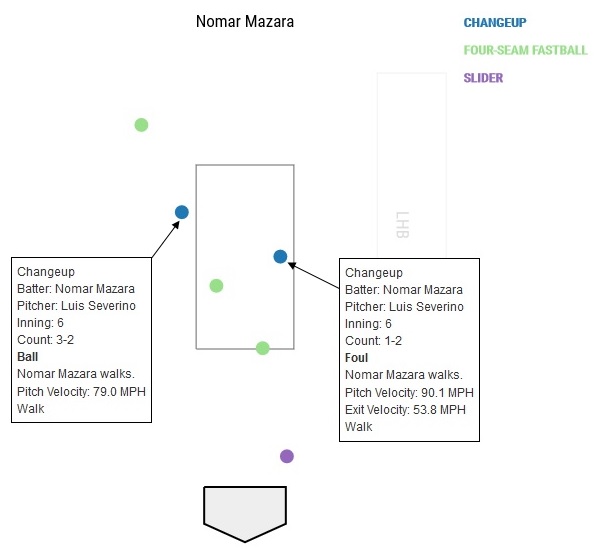 Last year I thought part of Severino’s problem was the lack of separation between his pitches. I’m pretty sure I wrote that somewhere, but I can’t seem to find it now. Whatever. (Update: Here it is!) Anyway, everything Severino threw was hard. It was all 90 mph and above, for the most part. Throwing hard is great, but big league hitters can time velocity if you give them enough time adjust, and when everything (fastball, slider, changeup) comes in around the same velocity, it’s that much easier to time.

This year Severino is achieving much greater velocity separation between his fastball and changeup. His average fastball is 97.7 mph. That’s ridiculous. It’s also the highest average fastball velocity among pitchers with enough innings to qualify for the ERA title by nearly one full mile an hour. (Chad Kuhl is second at 96.9 mph. No, really.) Catching up to 97.7 mph is hard enough. Now imagine doing it when the pitcher could bust out a low-80s (or even upper-70s) changeup. That’s how aces are made. We’re talking about a 15-20 mph separation between the fastball and changeup. That’s enormous. The league average is 9.1 mph.

Severino’s success this season — there’s basically nothing that could happen the last two and a half weeks that would take him off Cy Young ballot at this point — is the result of many things. Improved command, more confidence, experience, natural growth, and an improved changeup. That pitch was a non-factor for him much of last season. This year it is a legitimate weapon, and it’s only his third pitch. The fastball-slider combination is damn near elite. Add in a changeup that is approaching Bugs Bunny status, and there’s every reason to believe this version of Severino is here to stay.